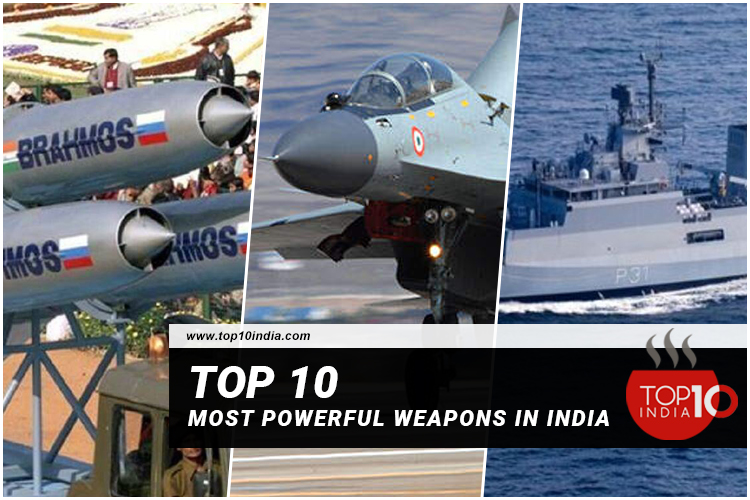 Top 10 Most Powerful Weapons In India | Deadliest Weapons: Brahmos Missile is the number 1 most powerful deadliest weapon in India that can help the Indian army win a war. The Indian military, the world’s fourth-largest, also possesses some of the most modern and high-tech weapons on the globe. It is admirable that India, with a defense budget of only $46 billion per year, has produced weapon technologies that are on par, if not superior, to those of the United States and Russia. India is not just the world’s largest importer of weaponry, but it will also be the fourth largest military spender.

Every country in the world has enemy threats and that is usual. India too has its enemies and it has its threats too especially from Pakistan and China. India being a peaceful nation doesn’t start first but if it starts from the other country India stays no far. From providing bulletproof jackets to our fighters to providing the deadliest weapons India is forever ready with its missiles and weapons for a war situation. Here are the top 10 most powerful weapons in India that the Indian Army, Navy, and Air Force possess and are among the best in the world.

The SU-30MKI is the apex of the Indian military’s air superiority, which would be dependent on outdated 4th-generation fighters without it. Simply put, a single plane is equivalent to two MiG-29s and two Jaguars. The Sukhoi Su-30MKI is a super-maneuverable twinjet air superiority fighter manufactured by India’s Hindustan Aeronautics Limited that costs Rs 358 Crore per unit (HAL).

No 3. INS Visakhapatnam (Destroyer) (Project 15B)

The Indian Navy launched its most powerful and advanced stealth destroyer ship, the INS Visakhapatnam, on April 20th. When INS Visakhapatnam gets christened as an Indian Naval Ship in July 2018, it will be the most modern Indian destroyer warship to sail the battle waters. The 8 supersonic BrahMos anti-ship missiles, 32 Barak-8 Long Range Surface to Air Missiles, Multi-Function Surveillance Threat Alert Radar System, and twin-tube torpedo and rocket launchers will be on the 163-meter-long, 7,300-tonne-heavy devourer.

The real name of this submarine, INS Chakra, is Nerpa (Russian-made). Chakra is the only Indian ‘nuclear war head-carrying submarine that can stay underwater indefinitely. Other traditional submarines are forced to surface virtually every day. Chakra contains 36 torpedoes and Klub anti-ship missiles, is almost silent, and can hold 80 people.

India launched the BMD Defense system in response to the threat of ballistic missiles from Pakistan and China. A ballistic missile is a short-range missile that is guided during extremely brief intervals of flight and can fall practically anywhere due to gravity’s control over its trajectory. Any ballistic missile launched from 5,000 kilometers away can be intercepted by the BMD system.

AWACS is an acronym that stands for Airborne Early Warning and Control System, which is used to detect airplanes, ships, and vehicles at vast distances. The Indian Air Force operates one of the world’s most modern AWACS systems. The A-50 Phalcon is one of three current aircraft. The AWACS system is made up of an Israeli Elta EL/W-2090 radar placed aboard a Russian Il-76 aircraft.

NAG is a “fire-and-forget” anti-tank missile developed in India by the DRDO at a cost of 3 billion rupees. NAG weighs 42 kg and can engage targets at ranges of 4–5 km with a flight speed of 230 meters per second utilizing an infrared imaging system. It is widely regarded as the world’s only anti-tank missile with a complete fiberglass structure.

This 45,000-kilo sea monster, by far the largest and most expensive aircraft carrier in the Indian Navy, can carry up to 24 MiG-29K fighters and 6 ASW/AEW helicopters. The INS Vikramaditya has sensor suites that prevent it from being monitored by airborne radar systems.

The Russian-made T-90s tanks are known as Bheeshma in India. The T-90S, a cross between the T-80U and the T-72B, has an improved fire control system and mobility. These tanks can be operated for more than three decades with little or no mid-life maintenance. The tanks have modern jamming systems, laser warning receivers, day and night vision systems, and a 125mm 2A46M smoothbore cannon with thermal capabilities. A Bheeshma tank, operated by a three-man crew, weighs 48,000 kilos, can cross water obstacles as deep as 5 meters, and can store 1600 gallons of fuel (diesel) under its nearly impenetrable armor.

No 10. Pinaka MLRS (Top 10 Most Powerful Weapons In India)

The Pinaka MLRS (multiple launch rocket system) is manufactured in India for the Indian Army by the Defence Research and Development Organisation (DRDO). Pinaka, which was combat proved in cold and high altitude locations during the Kargil conflict in 1999, can fire up to 12 missiles/rockets in 44 seconds with a reload time as low as 4 minutes. A single launch system mounted on an 88 Tatra truck is filled with 12 rockets with maximum ranges ranging from 40 km to 65 km.

Which is India’s most deadliest weapon?

Which is the most powerful missile in India?

Brahmos is the most powerful missile in India.

Which country has the most powerful weapons?

America, Russia, and India have the most powerful weapons.

What is the most powerful weapon today?

T-90S Bheeshma is the most powerful weapon today.