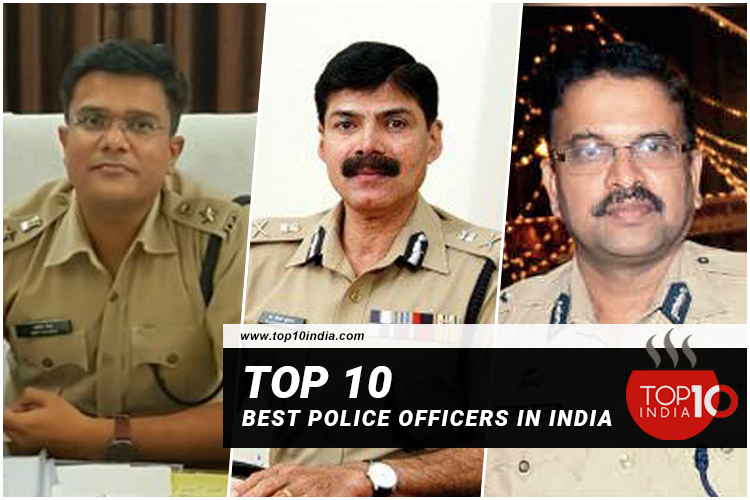 Top 10 Best Police Officers In India: Arif H Sheikh is the number 1 best police officer in India who is popular for bridging the gap between citizens and police. The development of a healthy political government depends on the strength of the police department in the country, nonetheless, India has one of the most powerful police forces in the world. The citizen’s liberty is maintained with the help of the police force, it’s the police force that helps the judicial system to maintain law and order in the country.

Independent India has many issues like political unrest, religious fights. I would say it’s the police department that had done its job for the development of socio-economic society. Courage, bravery, and not standing to corrupt society are few strengths police officers should have to bring up justice to be served to every individual. Here is our list of the top 10 best police officers in India.

Ranked highest in the list of the top police officer in India is Arif H Sheikh. He is known for narrowing the gap between police and citizens, he implemented the schemes “Amcho Bastar Amcho police”. He was awarded the Prestigious International Association of the chief of police Award in 2017 for under 40 awards.

He played a major role in removing the negative image in minds of local people in Bastar especially tribal people coming under the influence of Naxalites. He is the only police officer in India who won an international award from India under 40 category.

K Vijay Kumar is a retired Indian police officer popular as the 1975 batch officer who earned many prestigious awards including the police medal for distinguished service in 1999 and the police medal for gallantry. He started as Assistant police commissioner of police Trichy and emblem, he was in elite special protection group for Rajiv Gandhi.

He is famous for heading the task force that eliminated Veerappan (operation Cocoon )in 2004. he served from year 1975 -2012, and his last rank was as Director general of police. He is considered as one of the bravest and honest police officers who protected many elite politicians and took the brave decision which helped to maintain law and order in the country.

V.V Lakshmi Narayana on the list of top police officers in India is a retired police officer, known for leading many investigations like OMC Scandal, Emaar properties Y .S Jagan Mohan reddy scam, Satyam scam. He received an Indian police medal in 2006, In 2017 he got the president’s police medal for distinguished service, he is known for honest and for exposing corrupt people in the whole service. He is currently a political leader in the Jana Sena party. Born in Kadapa district in Andhra Pradesh, He is an engineer from NIIT Warangal and M Tech from IIT Madras.

The list goes on with the brave police officer in the Mumbai anti-terrorist squad, killed in the 2008 Mumbai attack, he was awarded Ashok Chakra posthumously. Hemant Karkare, from 1982 batch Indian police officer was among the excellent strategist who helped to crack down many terrorist attacks in Mumbai, many lives were saved because of his brave act.

Special cell division Delhi police died in 2008 battle house, Ashok chakra awardee and 10 times gallantry award winner is one of the best officers in the investigation department of the state police, there are few police officers from state police who make the top list of the police officer. Joined Delhi police in 1989 as sub-inspector and continued to serve for 19 years. He was a very brave and courageous officer, who could get any information in Delhi, with his links, in residents that helped him catch many culprits and put them behind bars.

Ajit Doval is the most influential and powerful person in India. He is currently the fifth national security advisor to the prime minister of India, which is equal to the rank of a cabinet minister. He was in 1968 Indian police officer batch Kerala cadre, and was brave and removed many insurgency operations including one in Punjab and riots in thalassery Kerala.

He also played a major role in the Sikkim merger with India and he was also one of the three negotiators to release the passengers from IC 814 in Kandhar in 1999. In 1988, He was awarded Kirti Chakra that makes him the first police officer to receive a medal previously given only to military honor

Vijay Salaskar is a police inspector from Mumbai police, who served the nation with dignity and respected the honor of being one of the honest officers in the state cadre. He was an encounter specialist, was head of an anti-extortion cell, and died while capturing terrorists in the 2008 Mumbai attack. He was awarded Ashok chakra in 2009 for his bravery. He was one of the few officers in the country who belong to the state cadre but was very brilliant and was respected by many IPS officers for his intelligence gathering skills, which helped Mumbai police to eliminate threats in the city.

Eight is the 1989 Indian police officer Was martyred in action in the 2008 Mumbai attacks, he died serving as additional commissioner of police in Mumbai city. He was known for his cool temperament and negotiation skills, he was honored with Ashok Chakra in 2009. He with the help of Hemant Karkare and Vijay Savarkar helped to capture terrorists in the Mumbai attack in 2008

K Prasad Babu is an Indian police officer from Andhra Pradesh who was torture to death by Maoists. He was a police officer of greyhounds special forces and was awarded Ashok Chakra by the Indian government in 2013 for his sacrifice for saving four of his fellow police officers. He was deployed in the Andhra Chhattisgarh border. He also belonged to the state cadre, He is inspirational to many youngsters to want to join the state cadre.

Among the Top 10 Best Police Officers In India, Shivdeep Lande is the 2006 batch, Indian police officer, known for his bravery and strict action for eve-teasers. He reduced crime rate in Patna by 50% and caught many criminals. He is also known for his modest nature as he is one of the officers who donates 60% of his salary for education and the mass marriage of poor girls in the city he serves.

He hails from Maharashtra nicknamed “super cop “ and “Singham” as he has a popular filmy cop character. He is an inspiration to many youngsters for his physical body. He is one of the few officers who can compete with the great bodybuilder of the nation.

Who is the No 1 IPS Officer In India?

Arif H Sheikh is the No 1 IPS Officer In India.

Who is the biggest police officer in India?

Ajit Doval is the biggest police officer in India.

What is IPS Salary?

Published in A to Z, Crime, News, Personality, Social and Sociology & Society