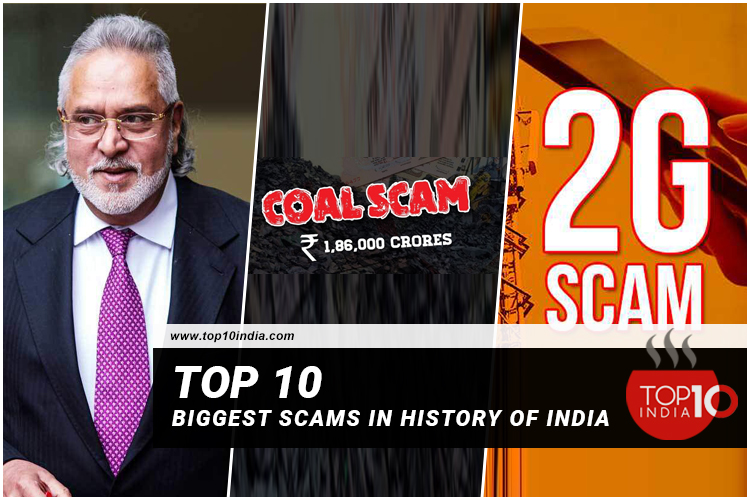 Top 10 Biggest Scams In History of India: Vijay Mallya is the biggest scam in India done by Vijay itself as he fled from India after a fraud of crores of Rupees. In India, we have all witnessed massive political and financial scams/frauds in our country for many years now, involving multi-million dollar sums of money. With so much money on hand, one can’t help but question if India would still be a growing country if the money had been put to better use. From India’s largest frauds, ranging from Vijay Mallya to the PNB Scam, all these scams are the biggest headlines of their time. The news related to scams and frauds does not remain invisible to any of us.

Currently, it is this lethal virus that has robbed individuals of their normal lives while also damaging the economy. However, in the past, a few individuals have harmed the country’s economy through corruption and malpractice. We’ve compiled a list of the top 10 biggest scams in India that have drained billions of money from India.

Vijay Mallya who used to run Kingfisher, the Airlines brand, had done a scam of Rs 9000 crore and fled away from the country. People used to refer to him as the “King of Good Times,” but things aren’t going so well for him these days. It’s liquor tycoon Vijay Mallya who we’re talking about. After being accused of fraud and money laundering in India, Mallya fled the country and sought sanctuary in the United Kingdom in 2016.

The Fugitive Economic Offenders Act recently classified him as a fugitive economic offender. But, what exactly is Mallya up to these days? While the Indian government tries to extradite Mallya from the United Kingdom, which does not appear to be happening anytime soon.

The coal allocation scam of Rs 1.86 lakh crore, is sometimes known as “Coalgate,” which is a political scandal that began in 2012 when the United Progressive Alliance (UPA) was in power. When the government was accused of fraudulently assigning 194 coal blocks between 2004 and 2009, the Comptroller and Auditor General (CAG) brought the scandal to light.

Because many bureaucrats and politicians were engaged, this was one of the scams that shook the entire country to its core. Despite the CAG’s initial estimate of a loss of moreover Rs 10 lakh crore, the final audit stated that the scheme cost Rs 1.86 lakh crore.

In 2008, the government was criticized for allegedly undercharging mobile phone firms for frequency allocation licenses used to build 2G spectrum subscriptions, with former Telecom Minister A. Raja is at the center of the dispute. The 2G Spectrum Scam was of Rs 1,76,000 crore.

The issue centers on suspected anomalies in the telecom ministry’s distribution of wireless radio spectrum and licenses to commercial operators, some of whom were ineligible.

The Commonwealth Games in India in 2010 drew more attention than the games themselves due to controversy and corruption. The CWG Scam was of Rs 70,000 crore. The entire event was tainted by claims of criminal conspiracy, cheating, and forgery, and Suresh Kalmadi, the chairman of the 2010 Common Wealth Games, was accused of corruption and malpractices.

The Indian athletes were also reportedly compelled to reside in deplorable conditions rather than the accommodations provided by the government. Even before the long-awaited sporting extravaganza could take place, it was doused in corruption suspicions. Suresh Kalmadi, the accused, was charged and eventually imprisoned by the CBI in April 2011.

Abdul Karim Telgi’s name is still inscribed in the collective memory of India. The con artist shocked the entire country by mastering the technique of fraud in the fabrication of replica stamp papers. The fraud spanned 12 states and was estimated to be worth more than 20,000 crores. This swindle was one of the first to bring to light the despicable corrupt activities of politicians and bureaucrats alike, thanks to the backing of several government departments.

During the 1980s and 1990s, there was a huge arms-contracting controversy between India and Sweden. In 1986, India purportedly agreed to buy a 155mm field howitzer from Swedish armaments company Bofors AB for Rs 1437 crore (about).

Many politicians, including then-Prime Minister Rajiv Gandhi, were accused of taking bribes or “kickbacks” totaling more than Rs. 64 crores in exchange for the agreement. The Bofors fraud is now believed to be worth roughly Rs. 400 crore in today’s money.

B Ramalinga Raju and his Satyam Computer Services Ltd are at the center of the 2009 corporate scandal known as the “Indian Enron Scandal.” In front of its board, stock exchanges, investors, and other stakeholders, the company admitted to misrepresenting, manipulating, and falsifying its records worth over Rs 14,000 crore.

With a total value of 14,000 crores, the Satyam scam is the largest fraud in Indian business history. Ramalinga Raju, Satyam’s disgraced former chairman, is accused of falsifying the company’s finances for years, exaggerating revenues and profits.

After failing to replace the “fictitious assets” with “actual assets” through Maytas acquisition, he decided to confess to the crime. The market capitalization of India’s fourth-largest IT firm dropped by Rs 10,000 crore (Rs 100 billion) in a single day as investors reacted angrily and ditched shares, driving the stock down by 78 percent to Rs 39.95 on the Bombay Stock Exchange.

A guy or woman’s best friend is a diamond, but diamantaires like Nirav Modi are not. Among the Top 10 Biggest Scams In India, Nirav Modi PNB Fraud was of Rs 11,400 crore. This fraud allegedly took place under the Brady House brand of Punjab National Bank, making it one of the most contentious scams. Not only Nirav Modi was implicated in the fraud, but so was his uncle Mehul Choksi and two senior PNB employees.

PNB filed a case with the CBI in 2018, alleging Nirav Modi and his firms of getting Letters of Undertaking (LoUs) from PNB without paying the margin amount on loans. This means that if those companies didn’t pay back the loan, PNB would be responsible.

No 9. Hawala scam (Top 10 Biggest Scams In History of India)

In the 1990s, the Hawala affair, among the Top 10 Biggest Scams In India, drew widespread attention, putting politicians such as LK Advani, Arjun Singh, Yeshwant Sinha, Madan Lal Khurana, and others in the spotlight. The hawala brothers, also known as the Jain brothers, were involved in a terrorist raid and were tied to this scheme. These politicians were discovered to be making payments of alleged black money through their brothers.

Another bribery issue was widely publicized in 1996. It involved payments of $18 million made through hawala brokers to the country’s top lawmakers. The list of defendants included Lal Krishna Advani, the opposition leader at the time. The public was taken aback when all of the main political figures were accused of accepting bribes and of having connections to funds going to Hizbul Mujahideen militants in Kashmir.

Never before has such a large part of the Indian population reveled in and praised a con. Many aspects of the IPL have been accused of being unethical, illegal, or both. Politicians and others are accused of laundering illicit funds through Mauritius and other tax havens that use shell firms and phony names to conceal investors’ identities.

There have been allegations of bribes, tax evasion, illicit betting, and violations of foreign investment regulations in connection with matches and bids for team franchises. Lalit Modi, the IPL’s founder, and chairman, as well as a former vice president of India’s highly politicized Board of Control for Cricket, was at the center of the growth and scandal (BCCI).

Which is the biggest corruption in India?

IPL Scam is the biggest corruption scam in India.

Who is the greatest scammer of all time?

Vijay Mallya is the greatest scammer of all time.

Who is the biggest criminal in India?

Vijay Mallya is the biggest criminal in India.