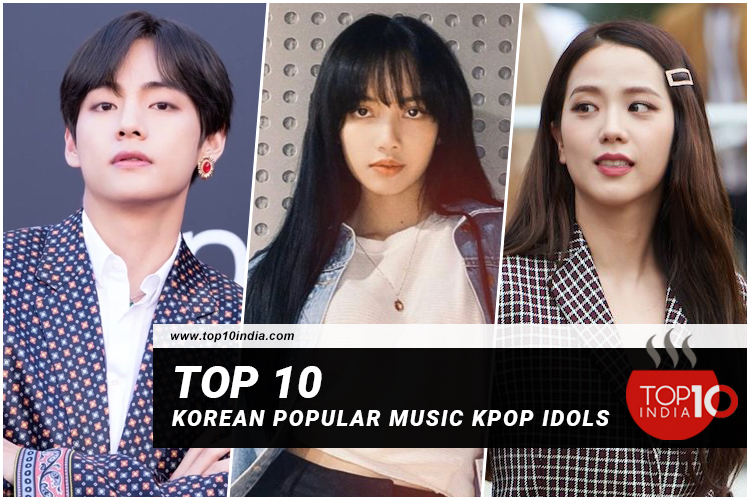 Top 10 Korean Popular Music Kpop idols:- A person who loves music by heart must be knowing that Korean music is trending all over the world because of its noncontroversial ways and stylish methods. Korean music has reached a different level in the past few decades with their huge fan following they can be heard in any part of the country around the globe.

Kim Tae Hyung is the number popular Kpop music idol is popularly and widely known as V, he is a South Korean stag singer, song composer, writer, and a very famous actor. He made his debut with the song No More Dreams in 2013. He made his movie debut with a supporting role in KBS2 old skool drama Hwarang: The Poet Warrior Youth under his original name Kim Tae Hyung. His famous songs are Singularity, Love Yourself: Tear. He became one of the youngest donees of Order of Cultural Merit award and was awarded by the President of South Korea with the other members of the BTS. V is not only popular in South Korea but is among all over the globe.

Lalisa Manoban Pranpriya Manoban popularly known by the stage name Lisa is a Thailand-born South Korean singer, rapper, and dancer. She is a member of the world-renowned South Korean Kpop girl group Blackpink of YG Entertainment. She debuted with the Kpop girl group Blackpink’s song Whistle as the lead single in Boombayah. She won Inspirational Role Model for Youth by Thailand Master Youth Club in 2021 and Popular Artist of The Award in 2020 by Weibo Starlight Awards and the Most Popular Person of the Year by The Standard in 2018.

Kim Ji-soo popularly recognized by the name of Jisoo worldwide is a South Korean actress and singer. She debuted with the famous Korean Kpopo girls group in 2016 under YG Entertainment. She started his acting career in 11 grade with the Korean drama club in high school and was also a basketball and taekwondo player as a child. She is the brand ambassador of Nikon, Smart uniform, LG Electronics, and Samsung. His famous songs are Lovesick Girls and Snowdrop.

Jeon Jung-kook is a South Korean singer, songwriter, composer, and lead vocalist in the famous South Korean boys group Bang Tan Boys. She is the youngest member of the boy band BTS who is one of the lead vocalists in the group. He debuted with single-track 2 Cool Skool. His famous songs are Love Yourself and Euphoria. Jungkook was awarded the Hwagwan Order of Cultural Merit award in 2018.

Oh, Se-hun is a South Korean singer, rapper, songwriter, actor, model, and dancer who is popularly known by the name of Sehun. He is a member of a famous South Korean- Chinese boy group EXO. He has been starred in Korean movies Secret Queen Makers, Dokgo Rewind, and Busted.

Park Ji-min is a South Korean actor, songwriter, composer, and dancer in the famous Korean Kpop boys group BTS of Big Hit Entertainment. He completed his graduation from Korean Arts High School in 2014. He debuted with the song No More Dream. He is the first BTS member to cross 100 million views on Youtube with Serendipity. Park was awarded by the Hwagwan Order of Cultural Merit in 2018 and His famous songs are Promise and Love Yourself.

Jennie Kim is a South Korean singer, lead rapper of Soth Korean Kpop popular girls group Blackpink. As a child, she was brought up in New Zealand and returned to the country at the age of five in 2010. She started his career in 2016 with popular YG Entertainment’s Blackpink and made his single song debut with Solo which was a domestic, international hit. His song ranked number 1 at Gaon Digital and Billboard’s song chart.

Lee Je-no is a South Korean singer, rapper, songwriter, dancer, and television host. He completed his education at the School of Performing Art in Seoul. He started his career in acting with television commercials at a very young age. Lee debuted in music with the famous Korean boy’s music group NCT in the album Empathy and the song Go. His famous songs are Misfit and 90s Love as the lead.

Kim Hyun-Joong is a famous South Korean singer, actor, songwriter, and song composer. He is a popular actor who played role in Korean dramas Playful Kiss and Boys Over. He debuted with the solo album Break Down in 2011 and due to his big fan following he is considered one of the biggest stars in South Korea.

Lee Ji-Eun is a renowned South Korean singer, songwriter, and television personality. She is widely recognized by the name IU which means I and you. She debuted with Kakao Entertainment at the young age of 15 and started to gain fame and stardom after the release of his albums Growing Up and IU….IM in 2010.

Published in A to Z, Country, News, Personality and Social