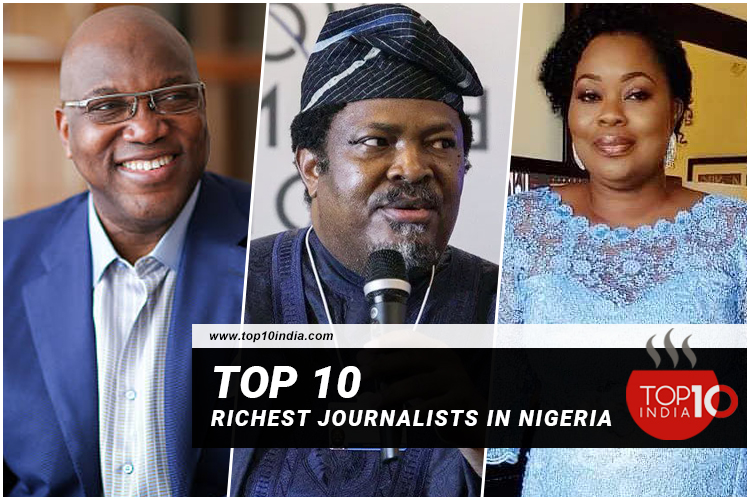 Top 10 richest journalists in Nigeria:- Nigeria is an African country with fewer human resources but full of natural resources. This country belongs to one of the least developed countries globally with a high level of poverty, less number of educated people, and financial problems spread all over the country. The technology and development rate is very low due to a lack of connection to the outer world.

A career in a field like journalism is very risky as it does not provide any job security and a fixed amount of salary to the person pursuing it. But as it is said that nothing is impossible so here is a list top 10 journalists from Nigeria who not only made a career in it but also earned a handsome amount of money from it.

John Momoh is a Nigerian journalist and the chairman and CEO of Nigeria’s one of the most famous and successful news channels Channels TV. He is widely known as a television industry pioneer who has 37 years of a long career in the industry. He is currently the acting chairman of the UNILAG Council by President Muhammadu Buhari on August 21, 2020. He won the Officer of the Order Award of Niger 2005, Lifetime Achievement Award in 2006, and Leadership Award in 2014. He is an alumnus of Harvard Business School and Lagos Business School.

Nduka Obaigbena is the chief editor and founding chairman of THISDAY Media Group. He was born n 14 July 1959 in Ibadan, Western Region, Nigeria in the Royal family of Owa Kingdom. He studied at the University of Witwatersrand, Johannesburg, and the University of Cape Town. He was also a member of the Constitutional Assembly in 1994. Nduka is the chairman of the Newspaper Proprietors Association of Nigeria and is also the chairperson of the Nigerian Press Organization.

Ayobamidele Abayomi Ojutelegan Ajani Momodu popularly known as Dele Momodu is a famous and widely journalist in Nigeria. He is also a businessman, motivational speaker, and publisher. He is the current CEO and publisher at Ovation International. He is also a weekly writer who writes a weekly column at PENdulum which is published in the famous magazine of Thisday newspaper. He completed his graduation from Obafemi Awolowo University and completed a master’s degree in English literature.

Maupe Ogun is a Nigerian journalist and host of Sunrise Daily on Channel TV. She completed his graduation from the University of Lagos and completed his master’s from the University of East Anglia in International Relations and Development Studies. She won a professional achievement award from British Council UK  Education in 2016 and also won the Outstanding Television Broadcaster Award in 2019.

Omoyele Yele Sowore popularly known as Omoyele Sowore is a Nigerian human rights activist and a former presidential candidate. He is also the founder of the famous online Nigerian news agency Sahara Reporters. He is an alumnus of the University of Lagos and Columbia University where he studied geography and planning. He is married to Opeyemi Sowore and lives in New Jersey. He started reporting in 2006 for Sahara Reporters in New York which helps in fighting corrupt and wrong public practices. they are supported by Ford Foundation and Omidyar Organization.

Kiki Mordi born on 12 August 1991 is a Nigerian writer, filmmaker, media personality, and investigative journalist. She went to the University of Benin but was not able to complete her graduation because of sexual harassment by a university lecturer. She won the People Journalism Prize for Africa in 2019, Nigerian Broadcasters Merit Award in 2016, and also won the Outstanding Radio Program Presenter award in 2016

Reuben Abati is a popular and well-known Nigerian Journalist, Television Anchor, and politician. He was also the special advisor on media to the President of Nigeria from 2011 to 2015. He completed his graduation from the University of Calabar in Theatre Arts and is also a Senior Research Associate with National Open University and Olusegun Obasanjo Center of Cultural Studies.

Oluwatoyosi Ogunseye is a Nigerian Journalist and the current head of language of services at BBC World Service. Previously she worked as editor of The Punch Newspaper and is also a fellow of Mandela Washington. Shew completed his graduation from the University of Lagos in biochemistry and a master’s degree in Media and Communication from Pan-Atlantic University in 2010. Till now she has won around 25 media awards which include the Journalist of the year award in 2011 and 2013, the Nigerian Academy of Science Journalist of the year 2013, and child-Friendly Reporter of the Year by the Diamond Awards.

Chikaodinaka Sandra Oduah popularly known as Chika Oduah is a Nigerian-American journalist who is a writer and photographer. She is presently a reporter for VICE News. She completed his graduation in film, anthropology, and broadcast journalism from the University of Georgia State. She got popular after she reported the Chibok schoolgirls kidnapping. She won the African Story Challenge award in 2015, she won Percy Qoboza Award in 2018, and the future awards in 2016.

Published in A to Z, Country, News, Personality, Social and Sociology & Society