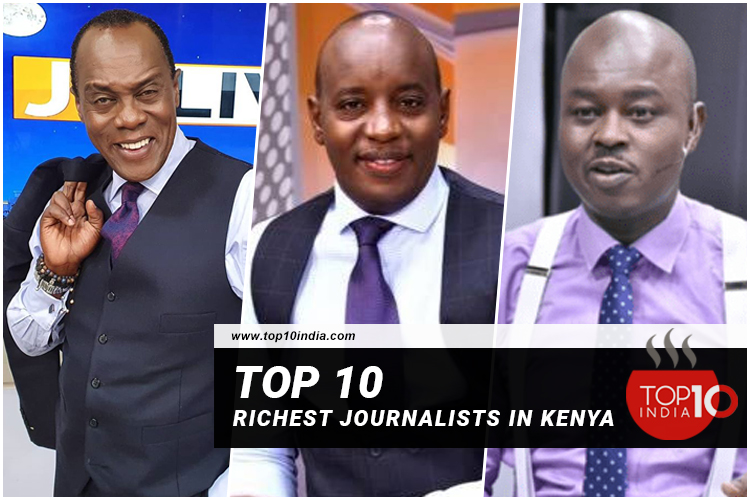 Top 10 richest journalists in Kenya:- Kenya is a country which is situated on the eastern side of the African continent. It is the 29th most populous country in the world with a population of 47.6 million people and is the third-largest economy in sub-Sahara Africa after Nigeria and South Africa. It is the 48th largest country in terms of the total area covered. Kenya is also an active member of the United Nations, Commonwealth of Nations, World Bank, and International Monetary Fund.

Kenya is mostly famous for its scenic landscapes and vast wildlife preserves and is also connected to the historic Indian Ocean in the East of the country. It has most world records in running and is known as the country of languages. Despite these features, it also has a great career in journalism and provides a good pay scale to the journalists. Here is a list of the top 10 richest journalists in the country.

Jeff Koinange is a Kenyan journalist and a tv host at Jeff Koinange Live since February 2017. He was the judge of East Africa’s Got talent and also served as a reporter for CNN and CNN International from 2001 to 2007. He completed his education at New York University. He is famous for his works in Capital Talk and Jeff Koinange Live. He is an Emmy award winner and appeared with Kenyan singer Sir Elvis at Country Roads events in September 2019. He earns an annual salary of Ksh 1.4 million

Linus Kaikai is a Kenyan Journalist the current chairman of the Kenya Editors Guild KEG and the Director of Strategy and Innovation of popular Kenyan Television station Citizen TV. He completed his master’s degree in international journalism from Masinde Muliro University. He started his career in the Kenya Television Network. He won the CNN African Television Journalist award in 1997 and also won the Environmental Journalist of the year award in the same year. He makes an annual salary of 974500 Ksh.

Joe Ageyo is a Kenyan journalist who is currently working for the popular Kenyan TV channel Citizen TV. He completed his senior secondary education from Sawagongo High School and completed his master’s in Environmental Governance from the University of Manchester. He was the news reporter at KTN in 2000 and was also the managing director at the same station. He won the 2001 Environmental Journalist of the Year award from the National Media Trust. He has an annual salary of around 905,500 Ksh.

Daniel Churchill Ndambuki is popularly known as Daniel Ndambuki is a Kenyan journalist and comedian who hosts a comedy show on NTV Kenya. He is also known by other names such as Mwakimu Kingangi. He has been working in the comedy industry since 1996. His show the Churchill Show is very famous in the African region and has also started gaining the attention of comedy lovers in the USA, UK, India, and Germany. He was on the television show of the year award in 2013.

Mohamed Amin was a famous and popular journalist from Kenya and a photojournalist who was born on 29 August 1943. Amin died of an Airplane crash on flight 961. His famous report on Michael Buerk in 1984 on the topic of Ethiopian famine made him popular and is the founder of Camerapix company. He lost his arm in 1991 during an ammunition explosion in Ethiopia during the Civil war. He also worked with the various popular journalists of his time which includes Tahir Shah and Michael Buerk.

Julie Gathoni Sumira Gichuru is a Krnyan journalist and entreprenaur. She completed his MBA from Cardiff University’s Law and Business School and was also listed in the 100 most influential African Women list of 2019. She was nominated for the Martin Luther King Salute to Greatness Award and has won numerous other awards during his long career in journalism.

Janet Mbugua is a Kenyan journalist, actress, and anchor. She started his career as a news anchor at KTN. She also played a lead role in the television series Rush after announcing his retirement from the television industry. She completed his MBA in Global Business Management from Swiss Management Academy. She also writes a book named My First Time which is a short collection of stories about their first interaction with menstruation.

Anne Kiguta is a Kenyan journalist, television host, and news presenter at K24 TV every Sunday at 9 pm. She previously worked for famous channels like Hope FM, Capital FM, KTN, and Citizen TV. She completed his undergraduate in mass media and public relations at the University of Daystar. Anne is also a child nutrition advocate and mentors young girls around the country.

Ruhila Adatia Sood born on 29 August 1982 was a Kenyan journalist and radio jockey of Indian origin. She completed his graduation from Aga Khan Academy and has worked for Kenyan Radio Group since 2007. She was married to Ketan Sood a member of the USAID mission. She was found injured during the Westgate Shopping mall shooting where she was hosting a cooking competition and died on her way to the hospital. She was around seven months pregnant with her first child.

Zain Verjee is a Kenyan journalist and television presenter. She previously worked as an anchor at CNN. She is a content creator and startup founder of aKoma Media. She completed his graduation from Oxford University with a Studies degree in Creative Writing. She announced his retirement from CNN media after working for 14 years to start his own media production company.

Published in A to Z, Country, Personality, Social and Sociology & Society