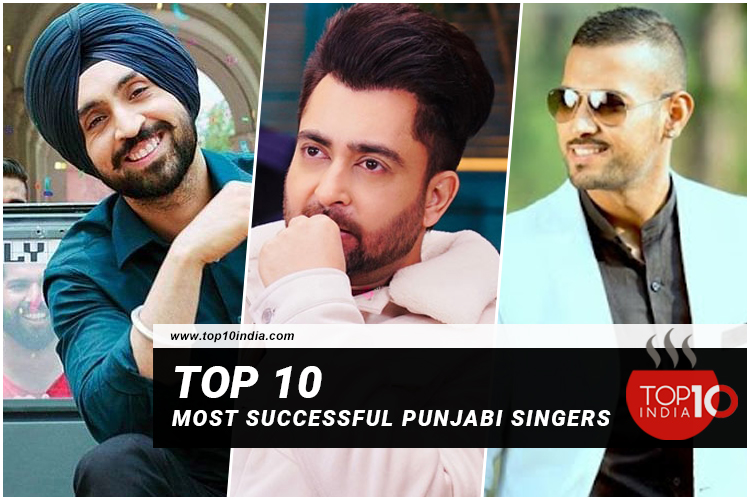 Top 10 most successful Punjabi singers:- Punjabi songs are the most trendy music not only in the Indian subcontinent and all over the world. They are popular because of the rhythmic beats and unique instrumental beats that lure everyone to dance and set the stage on fire. They are like the daily activities which a human being does every day.

In this article, we will discuss the top 10 successful singers who made Punjabi music popular as it is today and carried the legacy of their legends to pass on to the new generation. They are successful and popular due to their magical voices which everyone is crazy about. Punjabi singers are not just famous for their songs but also because of the fashion icon they have become to today’s youth.

Diljit Dosanjh is an Indian Punjabi singer, popular actor, and television personality who works in Hindi and Punjabi cinema. Diljit gained popularity after the release of his second album Dil in 2004. Some of the greatest songs that are the most successful Punjabi songs of all time are Lak 28 Kudi Da with Honey Singh and Jine Mere Dil Lutuya with Gippy Grewal in July 2011. He won the PTC award for Best Actor in 2020 and Filmfare for Best Male Debut for Udta Punjab in 2016.

Surinder Singh Maan popularly and widely known as Sharry Maan is an Indian Punjabi singer who started his career in 2010 with the hit song ” Yaar Anmulle” which is also the biggest hit of the year. His famous hit song includes Chandigarh Waliye and 3 Peg. He won Best Music Video for Yaar Chadeya at Brit Asia Tv Music Awards 2019.

Gurmukh Singh popularly and widely known as Garry Sandhu is an Indian playback singer and actor best known for his work in the Punjabi music industry. He debuted with the hit song Mein Ni Peenda in 2010. His famous hits who broke many records are Illegal Weapon, Yeah Baby, Excuses, and Banda Ban Ja.

Jaskaran Singh widely recognized as Karan Aujla is an Indian Punjabi singer, song composer, and rapper. He started his career in 2014 with Jassi Gill’s Range from Album Replay and then never returned. He debuted with his single lead song with Property Of Punjab in 2016 but started to gain popularity and fame after the release of his songs Alcohol 2 and Lafaafe. His popular songs which topped globally are Chita Kurta, Don’t Worry, Don’t Look, and No Need which has been featured in UK Asian Chart by Official Chart Companies.

Shubhdeep Singh Sidhu popularly famous as Sidhu Moose Wala is an Indian playback singer, rapper, and lyricist who mainly sings Punjabi songs and work in the mainstream Punjabi television industry. He began his career in 2016 with a song written him sung by popular Punjabi singer Ninja. he gained fame after the release of his hit song So High in 2018and his single track song 47. His famous songs include  Dark Love, Tochaan, So High, and Old Skool.

Amninderpal Singh Virk widely recognized as Ammy Virk is an Indian playback singer, actor, and lyricist who work in Pollywood and Bollywood. He started his acting career in 2015 with the Punjabi movie Angrez in which he won the Best Debut Male Actor Award at PTC. He is known for his unique way of singing. Some of his famous songs which proved to be successful are Qismat, Jannat, Channa Ve, and Wang Da Naap.

Hardavinder Singh popularly known as Harrdy Sandhu is an Indian playback singer, actor, and former cricketer who debuted with his song Tequila Shot. He gained popularity and fame after the release of his hit song Soch in 2014. He started his acting career with Yaaran Da Ketchup in 2014 and his two songs have been sung in famous Bollywood movies. His successful songs are Naah, Backbone, Kya Baat Hai, and Horn Blow.

Parmish Verma is an Indian Punjabi singer, director, and lyricist who mainly works in the Punjabi mainstream music and movie industry. He started his career as director of Rocky Mental. He directed most of the famous Punjabi songs videos like Dil and License with Ninja, Khaab, and Gaani with Akhil, Jatt Da Blood, and Choorey Wali Baah with Mankirt Aulakh and Yaar Beli with Guri. Some of his famous songs are Gaal Ni Kadni, Shada, and Sab Fade Jange.

Amrit Maan is an Indian playback singer, composer, and lyricist of the Punjabi music industry. He debuted with his successful song Desi Da Drum in 2015. He also started his acting career with the Punjabi movie Channa Mereya. His famous songs are Kaali Camaro, Bamb Jatt, and Peg Di Washna.