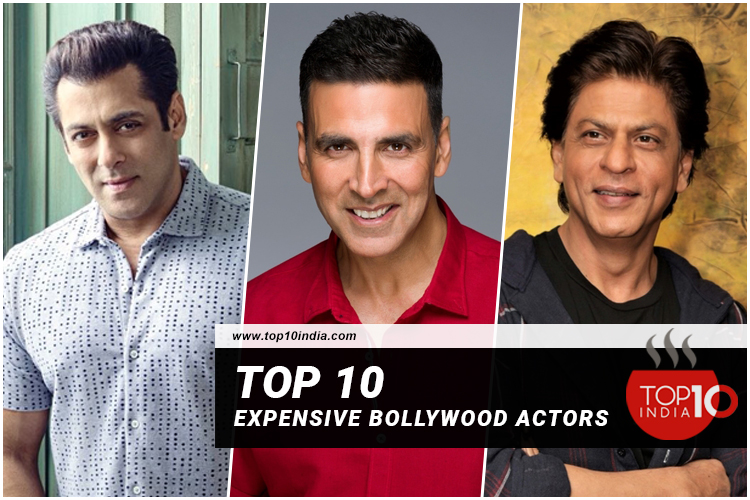 Nowadays big-budget movies are becoming a new trend in Bollywood and so bigger the budget the fees of actors are also big, now it’s more like the unnamed competition among the actors, Although it depends on many factors like a script, director, and previous film actors have done if the movie was hit or not?  The review is given by critics on the acting skills of an actor, but most importantly the fan base of the actors because fans loyalty is what makes them who they are today their trust in them which motivate them to do the best and push their limits. They fight for them and care for them and watch their movies even when the movies are not worth it, that’s why entering Bollywood is not easy.

Salman Khan is popularly known as “BHAI” of Bollywood belongs to a well-known Bollywood family. He started his acting career right after completing his graduation in 1998 and his movie was ‘Biwi ho toh aisi’, and till now has acted in more than 108 films. He was honored by national film awards, film fare awards, star screen awards, etc. He always touches the heart of the audience and fans also praise him whether the film is worth it or not. The unconditional love of fans makes him one of the most expensive actors of Bollywood.

Akshay Kumar better known as “KHILADI” because of his action stunts as well as his comic flicks, His real name is Rajiv Hari  Bhatia. He was born in a Punjabi family. He was trained in taekwondo and martial arts training. He was never thought of acting as a career but a twist of fate he enters Bollywood as a junior artist, and for the first time in 1992, he got a leading role in the movie ‘Deedar’ and that’s where Rajiv Bhatia starts his journey to become Akshay Kumar. With his humongous fan following and probability of giving a blockbuster, most producers are ready to pay him the huge amount.

Shahrukh Khan is an actor who rules the hearts of his fans, better known as ‘KING KHAN’, as his fans ranging from small kids to the oldies all over the world. He started his career from TV serial but the turn of fate leads to his first role in the movie Deewana, he acted in 93 movies till date and won 14 Filmfare Awards as the Best actor.

Aamir Khan is better known as Mr. Perfectionist of Bollywood, he counts as one of the most influential actors of the industry. He make his debut in 1988 as Raj in ‘qayamat se qayamat tak’. The secret behind the success of Aamir is that he always chooses those scripts which influence others and try to deliver a message through his movies. Aamir Khan is one of the actors that are honored by ‘Padama Shri’ and Padma Bhushan’.

Hrithik is the son of a prominent filmmaker Rakesh Roshan. He is well known for his dance moves and handsome face and sexy body. He is also considered the sexiest man in the world. He debuted in ‘Kaho Na Pyaar hai’ and the movie was a super hit. He is also known as a fitness enthusiast and also owns a clothing brand name HRX.

Ranveer Singh is the man who is on the mission to rule Bollywood and the youth loves him. His energy, cool attitude, quirky personality, and even his dressing style make him one of the most loved stars of today’s generation. He got his first movie in Yash Raj Films movie Band Baja Baarat in 2010. After his three consecutive super hit films Padmaavat, Simmba, and Gully Boy he became the top choice of the producer to be reckoned with. He has been honored with certain awards which also include the Filmfare award for best actor in male.

Ranbir Kapoor the chocolate boy of Bollywood is most loved by girls, he gets his amazing acting skills and good looks from his parents veteran actors Rishi Kapoor and Neetu Kapoor. He made his debut in 2007 with Saawariya and win the best male debut actor for that in 2008.  You can see the amazing work he has done such as Rockstar, Tamasha, Wake Up Sid, and Sanju.

Shahid Kapoor is a well-known Bollywood superstar probably named as a chocolate hero of Bollywood. He got his acting skills from veteran actor Pankaj Kapoor and groovy dance moves from actor-dancer Neelima Azeem. He made his debut with ‘Ishq Vishq’ in 2003 and won the Filmfare Award for best male Debut. In recent years he has done some phenomenal movies like Padmavati, Udta Punjab, Haider, and Kabir Singh, in which he showed his exceptional acting skill which was praised by fans and critics.

Amitabh Bachchan is well-known as BIG B.  He is India’s most loved actor, people from Bollywood and all over India respect him and his work. In the 1970s his is the ‘Angry young man of Bollywood. His father was the reckoned Hindi poet and scriptwriter Harivansh Rai Bachchan. He is the only actor of his generation who is working till now. In his career of more than 50 years, he has appeared in more than 200 films and touches our hearts with his acting. He also hosts a very famous tv show named ‘Koun Banega Crorepati.

Saif Ali khan is someone well-known as Chote Nawab of Bollywood as he was born in the royal family of Pataudi. His mother was a veteran actor and his father was captain of the Indian cricket team. Saif started with the lead role in ‘Parampaa’ in 1992. After his launch, he was a big hit in Bollywood for few years. He is honored with Padma Shri and the national award.

Who is the highest-paid actor in Bollywood?

Ans. Akshay Kumar is the highest-paid actor in Bollywood right now as he charges around 100 crores for a movie and sometimes more than that.

Who is the richest actor in Bollywood?

Ans.  Akshay Kumar is the richest actor in Bollywood with a net worth of 325 million dollars.