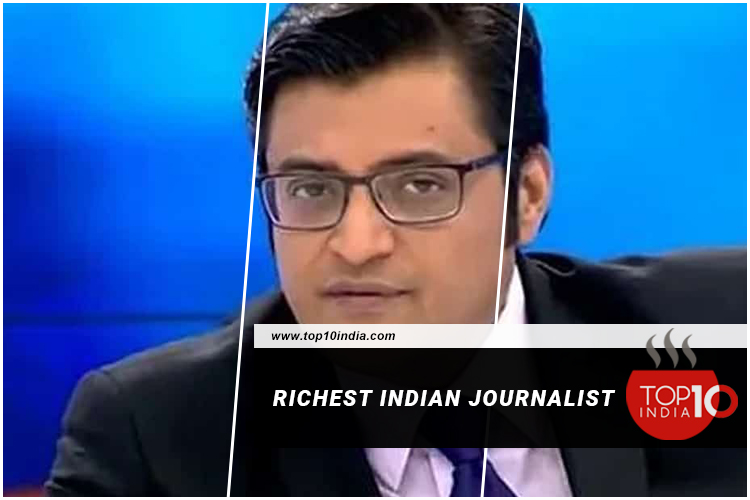 Richest Indian journalist:- Journalism in India is one of the fast-growing career options for youth. Like the other jobs, it also gained attention due to handsome salary packages and other perks that came along with it. It also provides security of jobs to the people in this field. Nowadays it is not just a career in India but the professionals are treated like celebrities by the citizen of India.

The net worth of India’s richest journalist Arnab Goswami is expected to be approximately around Rs 253 crore with an annual income of Rs 12 crore. He is the man responsible for taking journalism to the global level and got very famous for his saying like ” The nation wants to know”. He is famous as India’s one of the most celebrated journalists. It is also said about him that either you can love him or hate him but you can’t ignore him.

Arnab was born to Manoranjan Goswami and Suprabha Gain Goswami in Guwahati on 7 March 1973 in an Assamese family. His father is a retired Colonel in the Indian Army and later an unsuccessful candidate of Bhartiya Janata Party in 1998. He attended different schools during high school because of his father’s profession. So he completed his matric from St Mary’s School in Delhi Cantt. and Senior Secondary education from Kendriya Vidyalaya in Jabalpur Cantt. He completed his graduation in sociology from the prestigious Hindu College of Delhi University and completed his master’s from St. Antony’s College at Oxford University in Social Anthropology. He attended some lectures on International Studies at Sidney Sussex College of Cambridge University in 2000.

The Telegraph and NDTV:- Arnab started his career as a journalist in Kolkata with The Telegraph and then later after just one year moved to Delhi to work for NDTV. He also won the Best News anchor award of Asia 2004 by Asian Television Awards for hosting Newsnight. He worked for NDTV for 12 years from 1996 to 2006 and then left the channel to join the newly opened news channel Times Now as editor in chief in 2006. He featured imminent personalities like Parvez Musharraf, Benazir Bhutto, the then UK prime minister Gordon Brown, Afghanistani President Hamid Karzai, the United States former Secretary of State Hillary Clinton and he was also the first journalist to interview Narendra Modi the Prime Minister of India in 2014 for the very first time. He resigned from Times Now on November 1, 2016, due to editorial differences and newsroom politics. Arnab joined Republic TV in 2017 as editor in chief and managing director and haven’t seen back since then. His channel Republic has also been compared to the Kerala media for the pro-government affinity and has been called a fake news channel on various occasions.

Goswami is regarded as one of India’s most controversial television personalities on various occasions.