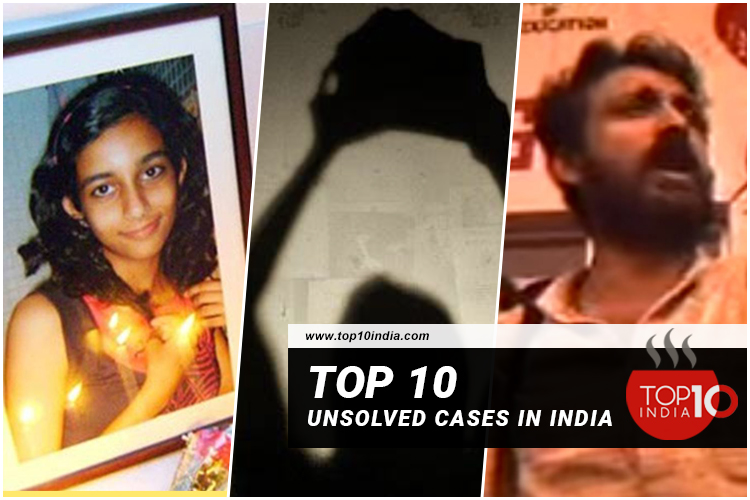 Top 10 Unsolved Cases In India: Arushi-Hemraj Murder Case is the number 1 unsolved case in India that left unsolved and is still a mystery to date. It is said that the assassin is the criminal and the soul who performs the crime is left with some proof, but sometimes people perform their purposes so skillfully that it becomes difficult to identify them. There have been so many cases where the police and the courts are failed to find out who is the culprit of the crime.

When news of someone’s murder becomes news people’s emotions are linked with that news and when people do not get a satisfactory result, they feel disappointed and keep on wondering who is the culprit? Below mentioned are the top 10 unsolved cases in India.

Who in India is unaware of the murder case of 13-year-old girl Aarushi Talwar and 45-year-old Hemraj Banjade, a male live-in residential worker hired by her family? The case stimulated public attention as a whodunit tale and got huge media coverage. The dramatic media coverage, which included wicked allegations against Aarushi and the defendants, was scrutinized by many as a trial by the media.

When Aarushi’s body was found on 16 May, the absent servant Hemraj was recognized as the main suspect. The subsequent day, his partly decayed corpse was discovered on the terrace. The police were massively criticized for failing to guard the crime scene instantly. After ruling out the family’s ex-servants, the police recognized Aarushi’s parents were considered to be the main suspects.

The Stoneman is a remarkable name given by the leading English-language edition media of those times in Calcutta, India to an anonymous serial killer who killed at least 13 homeless people of that city while they were sleeping in the year 1989. The name is also granted to the perpetrator of a related series of murders in Mumbai from the year 1985 to 1988.

It has been considered that these were the actions of the same person, who could have been liable for as many as 26 murders. The Calcutta Police also failed to solve whether any of the violations were committed as a copycat killing. Till today, nobody has been filled with any of the crimes; all thirteen murder cases are left unsolved.

On 31 March 1997, he was murdered by sharpshooters supposedly in the employ of Mohammad Shahabuddin of the Rashtriya Janata Dal, while approaching a street corner meeting in the district society of Siwan, Bihar in aid of a strike. His murder led to notable student protests across India. In 2012, four people were sentenced for his murder, and life sentences were granted to each of them, all the sentenced were once members of the Janata Dal.

Lalit Narayan Mishra who was born on 2 February 1923 and died on  3 January 1975, was Minister of Railways in the administration of India from the year 1973 to 1975. He was welcomed into statesmanship by the first Chief Minister of Bihar, Krishna Sinha when he was assigned parliamentary secretary at his persistence to the First Prime Minister of India, Jawaharlal Nehru.

In the year 1975, he died in a bomb explosion at Samastipur railway station. The court proceeding was suspended for years and was finally finished in December 2014. Among the Top 10 Unsolved Cases In India, Lalit Narayan Mishra Attack remains unsolved.

On 16 October 2007, the High Court advised that the Rizwanur death investigation which was done by the State Government is illegal, and recommended a Central Bureau of Investigations (CBI) inquiry. On 17 October 2007, under extreme stress from the civil organization, the Chief Minister of West Bengal.

Buddhadeb Bhattacharya declared that all five suspected police officers, including the commissioner, Prasun Mukherjee, and deputy commissioners Gyanwant Singh and Ajay Kumar, who were completely knowledgeable that Rizwanur did not perpetrate any crime according to law, but still actively engaged in the dangerous and torturing due to some compromise with Ashok Todi, will be shifted from their current posts with an instant effect.

He was also allowed to manage a CBI inquiry according to the High Court ruling and said that if the transferred police officers are found chargeable by the CBI, they will be executed according to law.

Sheena Bora, an official operation officer for Mumbai Metro One situated in Mumbai, went absent on 24 April 2012. It happened in August of the year, 2015 Mumbai Police detained her mother Indrani Mukerjea, her stepfather Sanjeev Khanna, and her mother’s driver, Shyamvar Pinturam Rai, for avowedly kidnapping and murdering her and consequently burning her body. Khanna and Rai admitted to the crime, and Mukerjea has said that Sheena Bora is residing in the United States.

Amar Singh Chamkila was a famous Punjabi singer, songwriter, performer, and writer. Amar Singh Chamkila is considered one of the most entertaining live stage musicians that Punjab has ever created. Having appeared for a show in Mehsampur, Punjab, both Chamkila and Amarjot were gunned down as they exited their vehicle on 8 March 1988 at approximately 2 PM.

A group of motorcyclists fired multiple rounds, fatally injuring the couple and other members of the attendants. However, no seizures were ever made with a link to the shooting and the case was never solved. There are many intriguing theories as to why Chamkila was shot.

Lal Bahadur Shastri who was born on 2 October 1904 and died on 11 January 1966, was an Indian politician who worked as the second Prime Minister of India. Stressing the necessity to increase India’s food production, Shastri supported the Green Revolution in India in the year 1965. This led to an increase in food grain generation, particularly in Punjab, Haryana, and Uttar Pradesh.

He guided the country throughout the Indo-Pakistan War of the year 1965. His slogan “Jai Jawan, Jai Kisan” became very common during the war. The war formally concluded with the Tashkent Agreement on 10 January 1966. He departed the next day, still in Tashkent, with the reason of his death in conflict; it was announced to be a cardiac arrest but his family was not convinced with the mentioned reason. He was posthumously bestowed the Bharat Ratna.

Rajiv Dixit who was born on 30 November 1967 and died on 30 November 2010, was an Indian civil activist. He was an enthusiastic supporter as well as a promoter of the Swadeshi movement and additionally he was the national secretary of Bharat Swabhiman Trust. He obtained his primary and secondary schooling in Firozabad. He died in Bhilai, Chhattisgarh, on 30 November 2010 with a cardiac seizure denoting declared to be the reason for death. However, Ramdev declined the allegations as intrigue theories by his political competitors.

Sunanda Pushkar Nath Dass who was born on 27 June 1962 and died on 17 January 2014, was an Indian female entrepreneur and the wife of an Indian former legislator and politician Shashi Tharoor. She was a selling director in the Dubai-based TECOM Ventures, was also the co-owner of the country situated Rendezvous Sports World (RSW), a cricket branch in the Indian Premier League.

What is the biggest unsolved crime in history?

Which is the most dangerous case in India?

Sunanda Pushkar’s Death case is the most dangerous case in India.

What is the most famous unsolved mystery?

Rajiv Dixit’s death is the most famous unsolved mystery.

Published in A to Z, Crime, General knowledge, News, Social and Sociology & Society