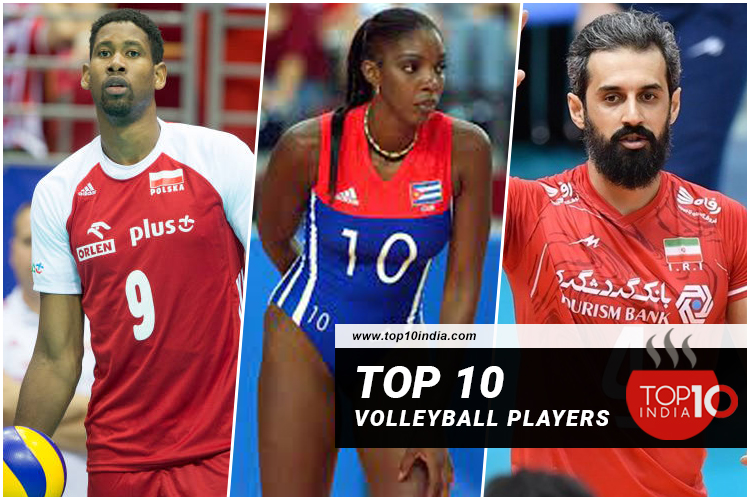 Volleyball Top 10 Players:- Volleyball was invented by William G Morgan back in the year of 1895. This game consists of two teams of 6 players each and players use their hands to hit a ball over the net. In 1913, volleyball competition started internationally but this game became an Olympic Sports in the year 1964 in Tokyo.

Soon after 1964, Tokyo Olympics FIVB recommended a 4 years cycle of international volleyball Events with the world cup championship, which started in1969. With the widespread of volleyball, this sport is now played across many countries like Brazil, Eastern European countries, Russia, China, and the rest of Asia. Many people have emerged as strong volleyball champions. Here are Top 10 volleyball players of all time.

Regla was born on 12 February 1975 in Havana. This champion won the Olympic gold medal at the young age of 17. 14 years old Regla was also engaged in International Circuit. She acquired 3 gold medals in the Olympic Games of Atlanta, Sydney, and Barcelona. She was a gold medallist at World Championship. In 1994 and 1998, she was also the gold medallist in World Grand Champion Cup in 1993, Japan. She was considered the best player of the 20th century and the award was given by VFB.

Saeid Marouf was born on 23 September 1985 in Urmia.  He is an active participant in the World food program and also helped to eradicate poverty. He has been designated with the title of ‘Most valuable player in Asian men Volleyball Championship’ of 2013 and  ‘Best setter at 2014 world League’. His major accomplishments are two gold medals in Asian Championship in 2013 and 2019 and one silver in Manila in 2009. He is also a gold medallist in the Asian games of 2014, Incheon, and 2018, Jakarta-Palembang. Currently, he is playing in the Chinese volleyball super league.

Passionate player and Captain of the Chinese Women’s Volleyball National Team, ZhuTing was born on 29 November 1994. She is known as the ‘Most Decorated Indoor Volleyball player’ of all time and is among the ‘Highest paid Volleyball player’ in the world. In 2016 she was proud gold medallist of the Olympic game that was held in Rio de Janeiro 2016. She was the gold medallist in the World Cup of 2015 and 2019 that was held in Japan.

India’s Pride and one of the greatest Volleyball players of all time were born on 8 March 1955 in a famous Kudakkachira family. 21-year-old Jimmy George was the Youngest volleyball player to receive the Arjuna Award. He was considered one of the best attackers in the world. But unfortunately, Jimmy died at the age of 32 in a car accident.

Saori was born on 19 August 1986, she is a volleyball player from Japan who played for Toray Arrows and also played for the All Japan Women Volleyball Team. She made her first appearance at the age of 17 She was the holder of the bronze medal in Olympics 2012 London and was also a bronze medallist in world championship Japan 2010.she is referred to as a versatile player and could play at any position. Kimura announced her retirement in 2017.

Lang ping was born on 10 September 1960, is a former volleyball player of china and now a head coach of the Women’s national team of china.  In 2016 she became the first person to receive a gold medal as both coach and player at Rio de Janeiro. She was also the gold medalist in the Olympic games which were held in Los Angeles in 1984. Leap A Biographical sports film based on her and china’s women’s national team was released on Sep 25, 2020.

Helia Souza also called Fafao Born on 10 March 1970. Helia competed in five consecutive Summer Olympics for her country and won gold and 2 bronze medallist in the Olympics of 2008 Beijing and 1996 Atlanta and 2000 Sydney. Souza played her last match at the FIVB world club championship and announced her retirement at the age of 45.

Published in A to Z, Brands, Country, Personality, Social and Sports