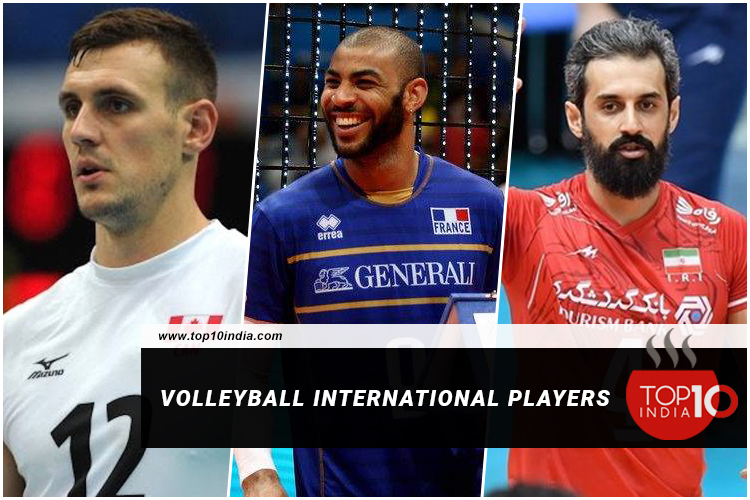 Volleyball International Players:-  Volleyball is a game full of joy, enjoyment, and extreme fun with a harmless nature as compared to other sports which are more prone to injuries. It also does not require much equipment or accessories for the playing just a playing area with a net. Games like cricket, badminton, and hockey require wickets, hockey sticks, and many other safety pieces of equipment.

Here is a list of players who gained international popularity and fame in the field of volleyball. They are the players who overcome all the rough sides with their hard work, dedication, and willpower. They made the toughest of things look simple and exited.

About:- Gavin Charles Schmitt is a former professional volleyball who represented the national team of Canada at the international level. He also played for the volleyball club Suwon KEPCO Vixtorm of Japan. He won a silver and bronze in the 2013 Canada NORCECA Championship and 2011 Puerto Rico NORCECA Championship respectively. He led and helped the Canadian national team to gain its best rank of 7th since 1949. He was also named in Canada’s National team for the Olympics team which was held in Rio.

About:- Earvin N’Gapeth is a French volleyball player and a current member of the French volleyball national team and also a member of the Russian volleyball club Zenit Kazan. He won the gold medal in 2015 and 2017 World Championship, gold in French Champion in 2010, 2016 Italian Champion and 2020 Olympics champion held in Tokyo. He won silver and bronze in the 2018 and 2021 FIVB Nations League respectively. He is the son of former volleyball player Eric who also represented France during the 1980s. He is also the brand ambassador of Adidas.

About:- Mir Saeid Marouf Lakerani is an Iranian professional volleyball player who plays in the setter position. He is the captain of the Iranian national team. He participated in the 2008,2012,2016 Olympics and 2014 World Championship and was also selected as the best setter in all these tournaments. He was also elected as the Iranian Sportsmen of the year 2015 and 2016 by an Iranian TV. He won gold in the 2013, 2019 Asian Championship held in Dubai and Tehran respectively. He also won bronze in the 2017 World Grand Champions Cup.

About:- Facundo Conte is an Argentine volleyball player and a member of the current national team of Argentina. He won bronze in the latest Olympic held in Tokyo 2020. He also won the gold medal in Pan American Games 2015 and a silver medal in South American Championship 2011. He also plays for the Polish volleyball club Aluron CMC Warta Zawiercie. He was also the 2017 and 2018 Chinese Champion and 2019 Brazilain Champion.

About:- Yuji Nisida is a young Japanese volleyball professional player who represents Japan in international events. He is currently a member of the Italian volleyball club Volley Callipo. He is also a member of the 2020 Japanese national team in the Tokyo Olympics. He is one of the youngest players to earn a position in the playing six for the Japanese volleyball club JTEKT. He debuted with the Japanese national team in the 2018 FIVB Volleyball Men’s Nation’s League.

About:-  Ivan Vyacheslavovich Zaytsev is an Italian professional volleyball player who represents Italy in international events. He is widely known by the name lo Zar. He is the captain of Italy’s men’s national team. He won bronze in the 2012 London Olympics, silver in the 2016 Rio Olympics 2016, silver medal in 2011 and 2013 European Championship, gold in the 2009 Mediterranean Games, bronze in 2013 and 2014World League, and silver in the 2015 World cup held in 2015.

About:- Kim Yeon-koung is a professional volleyball player from South Korea and the captain of South Korea’s national team. She is also a member of the FIVB Athletes Commission. She was selected as the Best Scorer and Most Valuable Player in the 2012 London Olympics where she set a world record for most points 207 beating the previous record by Yekaterina Gamova.

About:-  Bartosz Kurek is a Polish volleyball player and a participant of the 2012 and 2016 London and Rio Olympics respectively. He won gold in the 2018 FIVB World Championship and gold in FIVB World League. He also won gold and a bronze in the 2009 and 2011 CEV European Championship in Turkey and Austria respectively.

About:- Sheila Castro de Paula Blassioli is a volleyball player from Brazil who represented the national team of Brazil in the 2012 and 2008 Summer Olympics. She won gold in the 2012 and 2008 summer Olympics for two consecutive Olympics. She won gold in 2005 and 2013 World Grand Champions Cup and seven times gold medalist FIVB World Grand Prix champion.