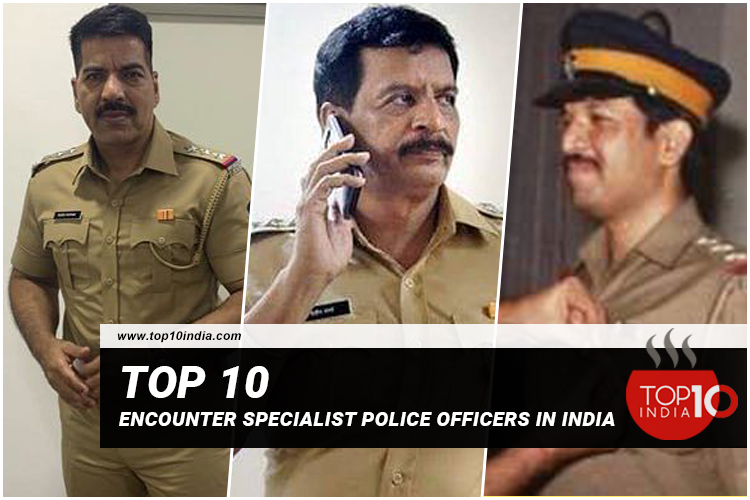 Top 10 Encounter Specialist Police Officers In India: Daya Nayak is the number 1 encounter specialist in India who has been popular nationwide and many movies have been made on his success. An encounter occurs when a criminal or gangster is cornered and asked to surrender, but instead confronts the police and tries to flee, resulting in the person being shot dead in retaliation. A police officer has the legal authority to harm or kill a criminal for the sole purpose of self-defense or maintaining peace and order. Nothing, however, should be done for personal benefit or with a malevolent or dishonest motive.

The police officers engaged in the killings are known as “encounter specialists,” and several of them became well-known in India. Some encounter specialists in the Indian Police Service are afraid of miscreants’ names when they hear them. Mafia and gangs have taken on a new appearance; they are no longer as interested in bullet wars and fights for supremacy; instead, they are more interested in land deals and contracts. However, the situation was not the same before; there were gangs, fights, and gangster encounters. Here is our list of the top 10 encounter specialist police officer in India.

Shimit Amin’s “Ab Tak Chhappan” and N Chandra’s “Kagaar” were both influenced by Nayak’s life. Sanjay Dutt’s portrayal of Nayak’s life in the film “Department” was another Bollywood dramatization of his life.

Despite his huge anxiety, he has been outspoken about his disdain for his role as an encounter specialist and has only slowed down his killing spree after consulting with now-ex-deputy chief minister R. R. Patil. In a successful encounter with Chotta Rajan’s gang members in 1997, Nayak was wounded twice.

According to rumors, he has committed 312 murders. However, the official figure is roughly 113 deaths. Pradeep Sharma joined the Shiv Sena, Maharashtra’s dominant party, on September 13th, 2019, and will run in the Maharashtra state assembly elections.

Pradeep Sharma is the second name of death for Mumbai criminals. During the 1990s and early 2000s, when the gang war was at its pinnacle, Pardeep Sharma was responsible for the deaths of 104 people (Official estimate). He was suspended in 2010 and has since returned to Mumbai. He serves as a mentor for a number of encounter specialists in Mumbai and India.

Prafull Bansale, a class investigator and cruel shooter are well known for his confrontation with Chota Shakeel, therefore men. He has murdered over 84 gangsters in the Mumbai underworld world. Prafull Bansale is known as fear among Mumbai’s criminals.

Vijay Salaskar, a Maharashtra police inspector, was killed in the Mumbai terror assault on November 26. He had 83 encounters and killed several offenders during his career. Vijay Salaskar, who was assassinated by Azmal Kasab and the LET gang in the Mumbai 26-11 incident. In Mumbai, he was known for his tense confrontations. He has been on the verge of sending 83 thugs to hell.

The Mumbai Anti-Extortion Cell’s first encounter was headed by Vaze and his mentor Pradeep Sharma. In 1997, he was also responsible for Asia’s first credit card fraud arrest. He quit and is now a Shiva Sena member. In Mumbai, Sachin Hindurao has killed over 63 crooks and thugs. Sachin Hindrao Waje has killed 63 thieves and gangsters in Mumbai while serving in the Maharashtra Police.

He led a Raigad police team in the arrest of Arnab Goswami, the editor-in-chief of Republic TV. He was detained again in March 2021 for his role and complicity in the Antilla Bomb Scare. He has suspended from the police force again after his arrest. On May 11, 2021, he was fired from his police employment.

SSP of Faizabad, who was a member of the STF that assassinated Chambal’s dread don Dadua. SSP Ananat Kumar has conducted 60 encounters, the majority of which took place in the Chambal region. Anant Dev Tiwari, an IPS officer with the Uttar Pradesh Police Department, has a strong dislike for criminals but a deep affection for mankind.

Criminals are very scared of this encounter specialist Anant Dev. 65 vicious men have been arrested and sentenced to prison over the last eight months. To apprehend them, a squad of 35 fearsome cops has been dispatched in the city.

Aligarh’s SSP in Uttar Pradesh, Rajesh Pandey is a well-known name for encounters. Shri Prakash Shukla, a reputed mobster, was killed by him. He has slain 50 thugs, including Salar Jung, a Laskar terrorist. Terrorist Sriprakash Shukla was one of the encounter team’s unique characters. So far, he’s received the Bravery Award four times.

In barely, 13 years of service, Rajbir Singh is the only police officer (Delhi Police) to be elevated to the rank of ACP. He has killed up to 50 people and beaten up the land mafia in Delhi. Rajbir was fatally murdered by a 20-year-old pal who owed him money from a real estate transaction. Rajbir Singh, an encounter specialist, was shot and killed on March 24, 2008, startling the whole Delhi Police team.

Rajbir was credited with more than 50 deaths and was also a key figure in the 2001 and 2000 attacks on parliament and the Red Fort. Rajbir was the first officer in the history of the police department to be promoted to the rank of ACP after only 13 years on the job.

IG Amitabh Yash of the STF was in charge of the entire operation of Vikas Dubey’s encounter in Kanpur. Amitabh Yash is an IPS officer from the 1996 batch who is also the commander of the Special Task Force. Amitabh specializes in Operations as a professional police officer. He originally sharpened his talents in Jalaun, a district filled with heavily armed bands of brigands that effectively governed the area at the time.

He was given a Police Medal for Gallantry for eliminating the infamous ‘Nirbhay Gurjar’ gang. Within a few months, he had defeated the infamous ‘Dadua’ gang in Chitrakoot, for which he was publically praised by the Chief Minister of Uttar Pradesh and given another Medal of Gallantry by the Indian government.

Who are encounter specialists?

The police officers engaged in the killings are known as “encounter specialists.”

Who is the encounter specialist Pradeep Sharma?

Pradeep Sharma is the one who has encountered 113 criminals and shot them to death.

What is the meaning of encounter specialist?

The police officers who officially have the right to shoot a criminal for the welfare of the country are encounter specialists.

Published in A to Z, Crime, General knowledge, News, Social and Sociology & Society