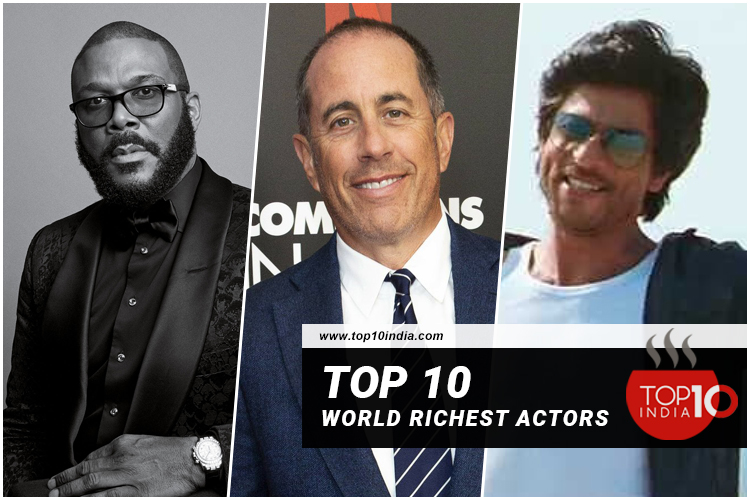 Top 10 World Richest Actors: Actors are well known for the lavish life they live off-screen. The glamorous life has always caught up by the general public. It is clearly evident by the way they live that they earn a lot amount of money.

Talking about celebrities around the world of movies and cinema. There is no doubt that they are one of the highest-paid ones. But what exactly is their net worth and who is tops in the list of the richest actors? Let’s see how much the celebrity earns and who the top 10 richest actors in the world are.

No. 1 among the top 10 richest actors in the world is Tyler Perry. At the top of our list, we have this Afro-American actor, writer, producer, and director Tyler Perry. According to the listing he currently has a net worth of $1 billion. Tyler Perry is known for some of his exceptional work as ‘Madea’ an elderly woman, that role was the best by far. Other than that he put the magic of his presence on stage with ‘Daddy’s Little Girl’ (2007), ‘Why Did I Get Married?’ (2007) and ‘Diary of a Black Woman’(2002). He has also surprised the world as a screenwriter and is amongst the highest-paid actors in America.

Next to the list of top 10 actors in the world, we have Jerry Seinfeld. This American actor, comedian, writer, and producer Jerome Allen Seinfeld is newly added to this list of richest actors in the world. His net worth is $950 million currently. He is best known for his great performance in many projects including ‘Seinfield’ (in 1988) along with Larry David, where he was playing a semi-fictionalized version of himself. By the end of the show, he was earning $1 per episode. He also worked as a part of the TV series ‘Curb Your Enthusiasm (2004-2009) and ‘Louie’ (2012-2014).

Bollywood’s star King Khan is at position 3 on the list of the top 10 richest actors in the world. Shah Rukh Khan started his career by doing a television soap named “Fauji”. His current net worth is to be $690 million. He is known for his exceptional performance and stage presence in films including ‘Dilwale Dulhania Le Jayenge’, ‘Dil Se’, ‘Kal Ho Na Ho’ ‘Kabhie Khushi Kabhie Gham’, and ‘My Name Is Khan’. He is popular for his charismatic and romantic style. He owned one of the biggest production houses ‘Red Chillies’ and is the co-owner of the IPL team ‘Kolkata Knight Riders’.

Tom Cruise is an American film star, producer, director, and screenwriter. He is one of the best actors of all time. His movies have earned millions worldwide. He is being honored with three Golden Globe Awards. He started acting in the early 1980s and made his debut in the leading role of the comedy film Risky Business. Tom Cruise estimated net worth is $600 million making him 4th on our list. The most famous films are Possible Franchise, Minority Report, Edge of Tomorrow, Magnolia, and many more. He is one of the highest-paid actors in the world; his films have crossed over $4 billion in America and $10.1 billion worldwide.

George Clooney is an American actor, director, producer, businessman, and social activist from Kentucky. The most famous films are ER, Three Kings, From Dusk till Dawn, and many more. He has an estimated net worth of $500 million, making him 5th on our list. He is one of the highest-paid actors after selling his Casamigos Tequila factory for 1 billion dollars. He is also known for his humanitarian works like helping to solve the Darfur Conflict and assisting victims of the earthquake in Halti.  He made his debut on television in 1978 and later gained good recognition as Dr. Doug Ross on the medical drama ER. He gained more success after the release of his film Soderbergh’s heist comedy remake Oceans’ Eleven. He was one of the actors who have won the Academy Awards for best-supporting Actor and Best Picture.

Mel Gibson is an American actor, director, producer, and screenwriter. Action hero roles are what best define him. He has worked in various roles including Max Rockatansky in the series ‘Mad Max’ and Martin Riggs in the series ‘Lethal Weapon’. He was awarded the Academy Award for Best Director and Best Picture. The highly controversial movie ‘The Passion of the Christ’ was directed and produced by Mel Gibson.

This multitalented American actor, comedian, and filmmaker, Adam Sandler is at position 7 on the list of top 10 richest actors in the world. Adam Sandler was a cast member on ‘Saturday Night Live’ before he moved into Hollywood and became a star. He is best known for his comic roles. His works include ; Big Daddy’, ‘50 First Dates’, ‘Grown Ups’, ‘Just Go With It’ and ‘Hotel Transylvania franchise’. He has been part of projects that earned $2 billion at the box office after combining his projects together.

At number 8 it’s Amitabh Bachchan. Holding a Net Worth of $400 million. The superstar of the 90s is also commonly tagged as the ‘Shahanshah of Bollywood’. Starring in over a hundred movies now. With his talent and love from the audience, he is also a producer, television host, occasional playback singer, and a former politician. He is undoubtedly one of the most influential actors in the history of Indian Cinema. His work consists of films like ‘Sholay’, ‘Amar Akbar Anthony’, ‘Deewar’, ‘Kabhie Khushi Kabhie Gham’, ‘Baghban’, ‘Don’, ‘Wazir’ and ‘Pink’.

At number 9 we have Jack Nicholson. Apart from acting, he is also a renowned writer and producer. His estimated net worth is $400 million. He is well known for his films The Cry Baby Killer, The Raven, and the shining. He is also known for playing in various supporting, starring, romantic, and villain roles. He was honored with an Academy Award for Best Actor in a leading role. He has also won Golden Globe Award for Best Supporting Actor and Best Actor. In 1957 Nicholson joined the California Air National Guard.

Bill Cosby is an American stand-up comedian, actor, and author. His career spanned six decades. That was before he was convicted of several sex offenses in 2018. One of his best-known performances was as Dr. Huxrable in his sitcom ‘The Cosby Show’. The show highlights the experiences and growth of the affluent. The African-American family was rated as the number one show in America from 1985 to 1989.

Who was the 1st richest actor in the world?

Ans: Merv Griffin was the 1st richest actor in the world.