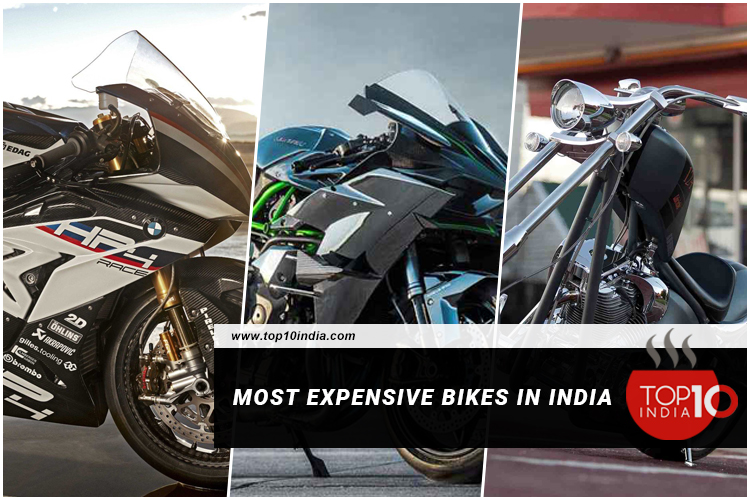 Most Expensive Bikes In India: BMW HP4 Race is the number 1 most expensive bike in India that costs Rs 86.70 lakhs in India. The term ‘most expensive bike’ is more than enough to create a sensation among all bike lovers and people who belong to the biking community. These expensive high-performance and premium bikes can make any bike fan go gaga. These are fully loaded with features that sometimes offer you the most amazing riding experience of your life. For these super expensive bikes, the Buyers apart from their showroom price are supposed to pay heavy taxes. These taxes are genuinely sometimes higher than the prices of cheap commuter bikes. The best part about these bikes is that they come loaded with safety features as well so your drive becomes the safest one.

Most Expensive Bikes In India

All credit goes to some of the popular Bollywood and Hollywood movies like Fast and Furious, Dhoom, One Week, and a lot more. These movies have helped people develop an obsession and passion for expensive bikes. These all movies have given way to bike obsession, especially in countries like India. These movies have basically raised the standards of the automobile industry throughout the globe. Each big brand comes with numerous new models of their bikes each year.  Some of them are expensive and loaded with features that make your biking experience a memorable one. Here is the list of the top ten most expensive bikes in India.

BMW HP4 Race is one of the most expensive bikes being sold in India. BMW HP4 Race is the only bike model that comes with a carbon-fiber body. It has a number of impressive pieces of equipment. This beauty has a 999cc engine, which can be regarded as ideal for 215 HP with 13,900 rpm and 120 Nm with 10,000 rpm.

Undoubtedly,  you can say that Kawasaki Ninja H2R is the most supreme and expensive bike in the entire country.  This bike is so amazing that it can easily make a medium-performance car at shame without any added effort. It can go up to 310 HP at 14,000 rpm. The engine is a supercharge one of 988 ccs. Kawasaki Ninja is regarded as the most superior and unique bike in the market for its engine.

Not many people are aware of this smart motorcycle but it is the personal favorite of a number of celebrities. Big Dog K9 Red Chopper comes with a massive 1807 cc engine. It has a twin-cylinder engine that is fitted under the bike frame. The features, look, and built of the Big Dog K9 Red Chopper are enough to explain its power and luxury element.

the Big Dog K9 Red Chopper provides you with a high-class road experience while biking and is also ideal for long rides with a 2088 mm wheelbase.

The price of the Big Dog K9 Red Chopper is Rs 59 lakhs.

Next on the list of most expensive bikes in India comes the high-class bike from the ace brand Ducati. Ducati Panigale V4 R comes with a robust machine; this machine is manufactured in Italy. The motor shift of this bike is amazing i.e. 1103cc to 998cc. it can be regarded as a high-power machine.

Harley Davidson bikes are every biker’s dream. But this CVO Limited is the most desired and the most expensive bike in India. This bike is definitely worth buying because of its built and features. The torque offered at 3250 rpm is 165 Nm. The only drawback here is the slipping chance as it is not a suitable one when it is raining outside.

It’s undoubtedly an automobile marvel with high-end performance. The MV Agusta comes with a 998cc engine along with an amazing 212 HP at 13,600 rpm and 115 Nm at 9,300 rpm.  Many people regard it as the best option among the most expensive bikes in India.

The most expensive bike in India is as beautiful as its name suggests. Roadmaster is an expensive bike with an 1811 cc engine. Its engine has twin cylinders that are capable of producing 138.9 Nm at 2600 rpm. These all features when combined are actually unbeatable. Indian Roadmaster weighs 428 kg and its petrol tank can carry 20.8 liters.

This bike is also known as the flying fortress. Moto Guzzi MGX-21 comes at number 8 among the most expensive motorcycles being sold in India. It comes with a twin-cylinder, that is good for 95 HP and has 121 Nm of torque. All these features make Moto Guzzi MGX-21 the most powerful one among the other ones listed above.

Norton Commando is a brand new addition to the family of the most expensive bikes in India. This latest edition bike comes with 80 HP at 6500 rpm, 90 Nm at 5200 rpm and it has amazing looks. If you are a fan of high-end things then there is no harm in investing in this bike.

Undoubtedly this amazing bike is the top one from Honda.  Goldwing is Honda’s most expensive one being sold in India. It has a 6-cylinder 1832cc engine that produces 124.7 BHP and 170 Nm. The engine of Goldwing is mated with a 7-speed DCT and can easily pull 379 kg heavy Goldwing.

Which bike is very costly in India?

Which is the no 1 bike in India?

BMW HP4 Race is the number 1 bike in India.

Which is the most expensive bike in the world in rupees?

Harley Davidson bikes are the most expensive bike in the world in Rupees.

Which is the heaviest bike in India?

Kawasaki Ninja is the heaviest bike in India.

Published in A to Z, Automobile, Electronics, Gadgets, News, Social and Tech