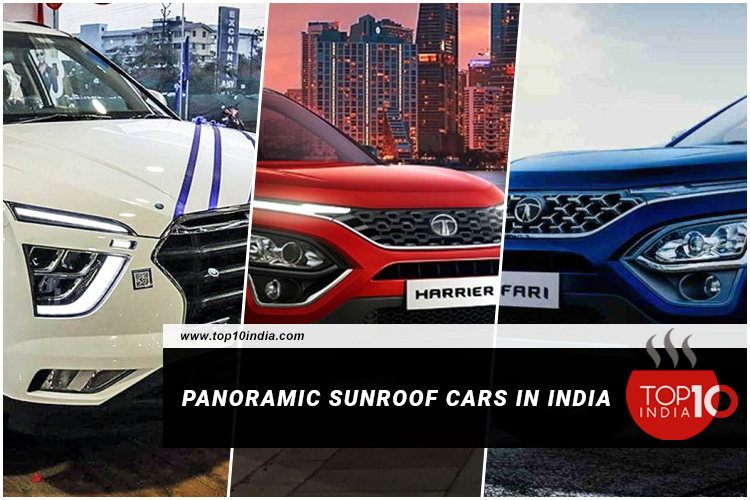 Panoramic Sunroof Cars In India: Hyundai Creta that costs Rs 13.79 lakhs is the number 1 cheapest car with a panoramic sunroof in India. Nowadays be it a hatchback or be it the compact SUVs they all arrive in the market with an electric sunroof. In order to increase the extra features in the car, the manufacturers have now of providing panoramic sunroofs on their cars.

We look for a list of features while buying a car since the car is something that will consume a big amount of someone’s budget. It is their priority to check the details about the car before buying it. Along with safety, engine capacity, mileage, and boot space having a Panoramic Sunroof has also become a feature people look for in automobiles in India. Here is our list of the top 10 cheapest car with Panoramic Sunroof In India.

No 4. MG Hector Plus

The factor which makes the MG ZS EV unique is the fact that it is the only electric vehicle in the Indian market that comes with a panoramic sunroof. The SUV also went through the process of up-gradation this year. It is the top-end ‘Exclusive’ variant that comes up with a panoramic sunroof and it costs Rs. 24.18 lakhs. The car was launched in the year 2019. 140 kmph is the maximum speed of this car. This car gives a tough competition to famous cars like the Hyundai Kona EV. The car offers two variants one is the Exclusive variant and the other one is the Excite variant.

The Jeep Compass has arrived in the market with an updated version that has better features than the previous one. There were no mechanical changes made by the manufacturers but it was noticed that the car now had a better and improved interior.

The Volkswagen T-Roc is a mid-size SUV with only one fully outfitted variation. The SUV debuted in India in March 2020 and sold out in less than two months.

Honda stopped the diesel engine right before the new BS611 was launched in the market. It now arrived on the market in a sole 2.0L petrol along with a CVT gearbox. Honda CR V particularly competes with Skoda Kodiaq and Volkswagen Tiguan All-Space.

The engine of Volvo XC40 can produce energy of 190bhp and torque producing capacity is of 300Nm. The car has some BS6 emission norms, Volvo India stopped the 2.0L diesel and launched the 2.0L BS6 compliant petrol motor.

Which is the cheapest car with a panoramic sunroof?

Hyundai Creta is the cheapest car with a panoramic sunroof.

Which is the cheapest car with a sunroof?

Tata Harrier is the cheapest car with a sunroof.

Which sunroof car is best?

Which car has the biggest sunroof?

Hyundai Creta has the biggest sunroof.

Published in A to Z, Automobile, Brands, Electronics, Social, Sociology & Society and Tech