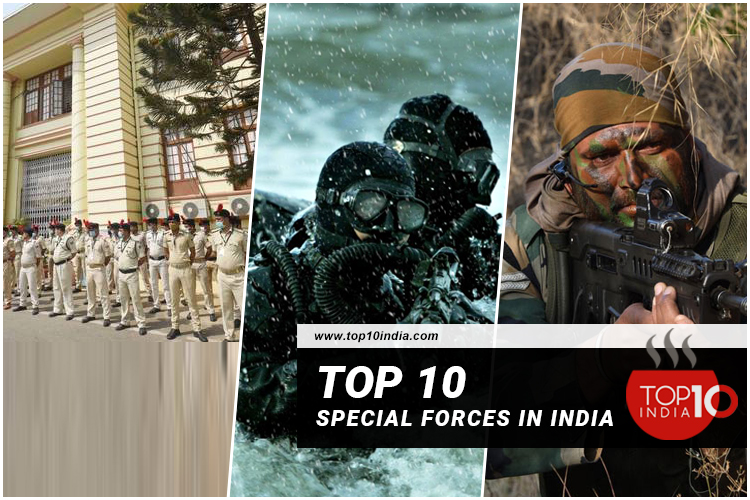 Top 10 Special Forces In India: State Armed Police Forces is the number 1 Special Force in India with its units in various parts of the country, making it the best special force. India has been independent for 73 years, and in this span of 73 years, it has been subjected to many conflicts. These conflicts were mainly with the neighboring countries. But these conflicts have also given rise to some of the best Special Forces the world has ever seen.

We are the 7th largest country globally and have the world’s 2nd biggest army overtaking several other countries like the United States of America and Russia. This large army has required the landmass of India that has a variety of terrain and weather conditions. Also, in case of terrorist attacks and serious military conflicts, some of the most elite forces of India are deployed. Today, in our list of top ten special forces in India, we will take a look at some of the world’s most well-trained and well-equipped military forces.

The State Armed Police Forces are special tactical units that are established in different states around the country. These forces are deployed in a situation where a higher level of armed expertise is required.

Some of the State Armed Police Forces:

The abbreviation MARCOS stands for Marine Commandos and is officially called the Marine Commando Force (MCF). This force is a special unit of the Indian Navy and is deployed during special operations.

The MARCOS was formed in the year 1987 after three officers who the Indian Navy selected were selected for training with the United States Navy Seals in Colorado in 1986. These three officers were the first members of the Special Forces. The force can operate on land, air, and sea, but they specialize in maritime operations.

According to a report published in 2012, the Special Force has about 2000 members, but the exact number of personnel remains classified. They also specialize in reconnaissance operations, amphibious warfare, and counter-terrorism. The MCF has its naval bases in Mumbai, Goa, Kochi, Port Blair, and Vishakhapatnam.

The Para Commandos are also known as Para SF (Special Forces). This unit is a special operations unit of the Indian Army. This unit is attached to the Parachute Regiment, also having its roots in World War II.

Lt Gen Paramjit Singh Sangha is the Colonel of the regiment. With the formation of the 50th Parachute Brigade in October 1941 during World War II, the regiment’s roots were sown. In 1966, the 9 Para SF was raised as 9th Parachute Commando Battalion as part of the Parachute Regiment.

The Para Commandos were involved in various successful operations, including the Indo-Pakistan war of 1971.

This force acts as a primary assault battalion and shock troop at the frontline of the formation. These forces are tasked by the battalion or brigade commander with reconnaissance, raids on enemy artillery positions, supply posts, technical headquarters, and other tactical positions that are important for the enemy.

The Ghatak platoon consists of mainly 20 well-built and fit men that are capable of laying strong attacks. The force currently has over 7000 active personnel deployed across the country.

The abbreviation COBRA stands for Commando Battalion For Resolute Action. This force is a specialized unit of the CRPF (Central Reserve Police Force). It was formed to counter Naxalism in India mainly.

COBRA Force is formed for special ground operations and is well trained in guerrilla warfare. The force has 10 battalions and has around 10000 active personnel. It is also one of the most experienced law enforcement units around the world. Due to the rising security challenges by Naxalites around India, the MHA approved the formation of 10 COBRA battalions.

The founder DIG of the COBRA Special Force is K.V. Madhusudhanan. They are also one of the most well-equipped forces in India, with an annual budget of 13 billion rupees. Their headquarters is located in New Delhi.

This force is a Special Force of the Maharashtra Police, which the government of Maharashtra formed. It was formed after the infamous 26/11 attacks that happened in Mumbai. Since then, it has become one of the best special forces in India.

The force was formed as a response to the 26/11 attacks under Maharashtra on 26th November 2010. The force has over 300 active commandos. Young and well-trained officers from the Mumbai Police are recruited for this force. The Israeli Special Forces conducted the initial training for two months, and Force One was founded.

Special Frontier Force is one of India’s most famous special forces that was created on 14th November 1962. It is a renowned special operations unit. This unit is mainly comprised of Tibetan refugees living in India.

Since its formation, the unit’s size and scope of operations have also increased. In the Sino – Indian War, this unit played an important part by conducting covert operations behind Chinese lines. The SSF has fought in major external conflicts like the Kargil War and the Bangladesh Liberation War. It was also involved in Operation Blue Star.

During the 2020 Chinese conflicts, the SSF has played an important role. The SSF is not a part of the Indian Army but functions under their operational control.

The National Security Guard (NSG) is an elite Special Force of India. It is also one of the most famous military forces in our list of special forces in India. It was formed under the Indian Ministry of Home Affairs.

In 1986, the then Prime Minister Indira Gandhi was assassinated, and the Golden Temple was attacked. It was formed on 22nd September 1986 and had its headquarters in New Delhi. The force has around 14000 active personnel.

It is a special counter-terrorism force that is only deployed in exceptional cases. Yet, they are also tasked with protecting VIPs and politicians.

The Garud Commando is one of the most elite forces. This force is a special operations force and is a part of the Indian Air Force. It has around 1500 active personnel. The Garud Commando Force was formed on 6th February 2004 and is a special task force of the Indian Air Force responsible for search and rescue, disaster relief, and base installation.

The need to form this force was reckoned after terrorists attempted to attack two air bases in Jammu and Kashmir in the year 2001. Thus, the need for a specialized commando force was needed to protect these critical places. The Garud personnel is enlisted as airmen under the Indian Air Force.

No 10. The Special Protection Group (Top 10 Special Forces Of India)

The Special Protection Group is a Special Forces which is formed for protecting the Prime Minister of India. This force was formed in 1988 by an Act of Parliament of India.

The sole purpose of this special task force is to protect the Prime Minister and the immediate family members residing with them at the official residence. After the assassination of Prime Minister Indira Gandhi in October of 1984, it was jointly decided by the Committee of Secretaries that the task of protecting the Prime Minister was to be given to a special force.

The National Security Guard is one of the most powerful commandos in India.

The Garud Force is the No. 1 special force in India.

The COBRA and National Security Guard are the most powerful military forces in India.

NSG and COBRA forces are the best special forces in India.