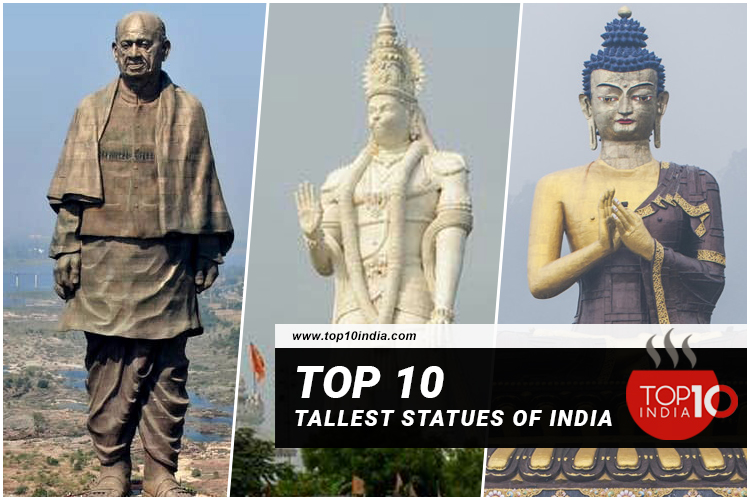 Top 10 Tallest Statues Of India: Statue Of Unity is the tallest statue of India that has a height of 182 metres. A statue is a free-standing sculpture in which the realistic, full-length figures of great persons, animals, gods or goddesses are carved with stones, metals or bricks. Statues have been produced in many cultures from prehistory to the present, the oldest known statues dating to about 30000 years ago.

Statue of Unity is located on a river Narmada island facing the  Sardar Sarovar Dam in Kevadiya colony, 100 kilometres southeast of the city of Vadodara. It is a symbol of the country’s unity and integrity.  The height of the Statue Of Unity is 182 metres which is twice the size of New York’s Statue of Liberty. The statue of unity was built to commemorate Sardar Vallabhai Patel, one of the most prominent leaders of India.

The Buddha Park of Ravangla is also known as Tathagata Tsal is situated near Ravangla in the South Sikkim district of the Indian state of Sikkim. It was created between 2006 and 2013. Tathagata Tsal is a 130 feet high (40) statue of the Buddha. It was built to mark the 2550th anniversary of the birth of Gautama Buddha.

The Dhyana Buddha is a statue of Gautama Buddha seated in a meditative posture which was located in Amaravathi of Andhra Pradesh. The Dhyana Buddha statue is 125 feet tall and is situated on a 4.5-acre site on the banks of the Krishna river.

No 6. Statue Of Guru Rinpoche

The statue of Hanuman Murti is located at Jakhu Hill near Shimla in Himachal Pradesh. Hanuman Murti height is 33 metres (108 feet). This temple of Jakhoo is of the god Hanuman. This statue is commissioned in 2008 and completed in 2010. It was told in Ramayana that Hanuman had taken rest at this location when he was going to search for the Sanjivini Booti to revive Lakshmana.

The Basava statue is situated in Bidar which is the district of Karnataka. It is known as the tallest statue of Lord Basava in the world. Basava statue height is 33 metres (108 feet). Lord Basava was an Indian poet, Social reformer and Philosopher of the twelfth century.

Mindroling Monastery Buddha Statue is situated in the middle of the serene foothills of the Himalayas. The Mindroling Monastery is considered one of the largest Buddhist centres in India. Many beautiful gardens and a stupa are situated within the perimeter of the monastery.

Which Indian monument has the highest height?

Statue Of Unity that was inaugurated by Narendra Modi Ji is the Indian monument that has the highest height.

What is the second tallest statue in India?

Which statue is the tallest?

Statue Of Unity is the tallest statue.

Which is the smallest statue in India?

Thiruvalluvar Statue is the smallest statue in India.

Published in A to Z, General knowledge, Infrastructure, Nature, News, Others and Sociology & Society