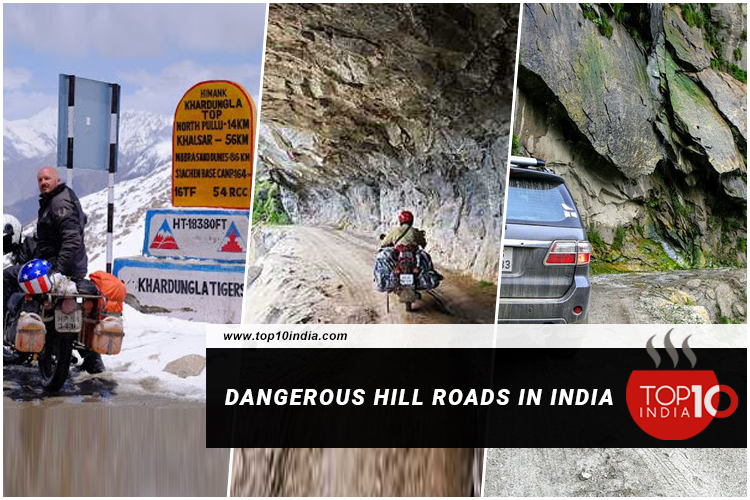 Dangerous Hill Roads in India: Khardungla Pass is the number 1 most dangerous road in India that is located on the silk route between India and China. Talking about the most dangerous roads in India, some routes are considered to be so scary that they can give chills to even the most seasoned drivers. The narrow roads, sharp turns, low-hanging cliffs, and scabrous climatic conditions can lead the way to death in lieu of the planned destination. Apart from bad maintenance, Most of the time the location of a road makes it a dangerous drive.

Located- Ladakh, on the Caravan Route that was previously the Silk Route between India and China

What makes it dangerous- This road is dangerous for the absolute unbeatable height of 5,602 meters above sea level. Moreover, the road is not covered and is greasy due to the frozen ice and dirt mix and then there is the hairpin that goes round in circles that are night terrors of even the most experienced drivers of the area.

Located- Eastern extremity of the Kishtwar district of Jammu region

What makes it dangerous- The road is stormy, tapered, and without a guard rail for about 150 meters. The overhanging cliff is so down that a Tata Sumo or similar car would hardly fit. The sharp turns with the cliff block the view and make it all even harder to make those turns. One mistake of the driver and the drop is of about 600 m.

No 3. Killar- Kishtwar Route: A copy of the Kishtwar Kailash Highway

What makes it dangerous- Much like its twin road, the Kishtwar Kailash Highway, the road runs without guard rails and has overhanging hills & sharp turns, and is tapered. This road is not an easy drive even in broad daylight also and let alone at night.

What makes it dangerous- The road is at an altitude of 3,538 meters above sea level and is extremely narrow and immensely greasy due to the year-round snow and dirt mix. It gets mucky during the rains and gets obstructed during the storms. Aside from the recurring landslides have made it one of the dangerous roads in India.

What makes it dangerous- At an enormous elevation of 5,360 meters from above sea level and the road remains snow-covered throughout the whole year. This makes the road greasy. Here also one can feel the need for oxygen while traveling on this dangerous road. The low temperatures in this area add to the travel misery of those curtail through this third highest passable and dangerous road in the world.

Located- NH 22, at the start of Kinnaur area

What makes it dangerous- Taranda Dhank is fabled for taking several lives. The low overhanging rocks, narrow dark holes, and blind turns make this road extremely deadly. Here only a single mistake of the driver can lead to the vehicle fall down into the Baspa River and If not the fall then the crash of vehicles around the blind turns is really death-dealing.

No 7. Rohtang Pass- The Ground of Corpses

What makes it dangerous- At an altitude of 3,979 meters above sea level, As Rohtang Pass is the gateway joining Manali to Leh and Lahaul plus Spiti. Although, it is the entire route of 479 km that is truly dangerous. The snow-covered roads are liable to landslides, mostly in areas that are surrounded by mountains on both sides.

What makes it dangerous- This route is liable to landslides during monsoons weathers and snow sludged in winters. Apart from that, the curved roads are immensely greasy and are dangerous for driving.

Located-Raigad District, Maharashtra- The road begins at Neral at an altitude of 40 meters above sea level. The 8.9 km road takes you to Matheran which is situated at the height of 800 m above sea level.

What makes it dangerous- The least elevation gain is 8.5% per stretch with a total gain of 760 meters. The abrupt and narrow lanes are followed by hairpin turns. Most of these lanes are even without guard rails. To add to the misery of the drivers, rains make the roads greasy and may even cause landslides. Although, the happening of landslides is very infrequent on these roads.

No 10. Sela Pass- Leisurely most Curvy Road to Hell

What makes it dangerous- The peaky mountain pass is situated at an altitude of 4,170 meters above sea level. But its sharp turns, slippery curves and, winding design can be deadly. Additionally, the road is covered in snow for most of the year. This adds to the driving hard for the travelers. So it is recommended to drive really slow and not get lost in the extensive views.

Which road is the most dangerous?

Sela Pass- Leisurely most Curvy Road to Hell is the most dangerous road in India.

Which is the no 1 dangerous road in India?

Khardungla Pass- The World’s Highest passable Road is the no 1 most dangerous road in India.