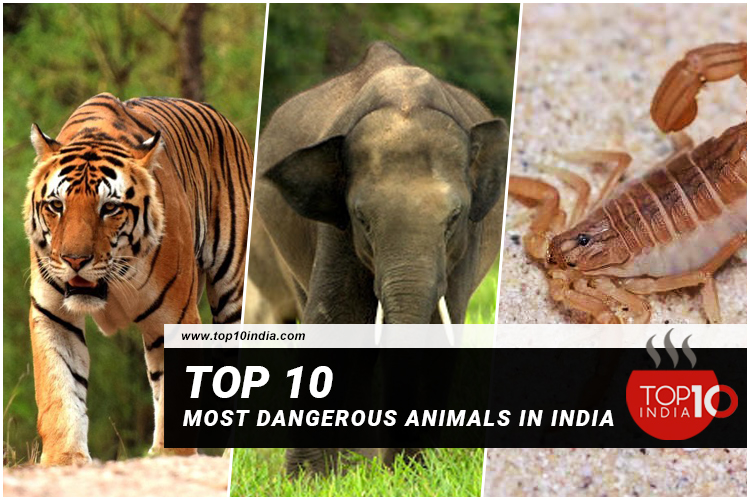 Top 10 Most Dangerous Animals In India

Top 10 Most Dangerous Animals In India: Bengal Tiger is the number 1 most dangerous animal in India that kills thousands of humans yearly. When it comes to animals, a completely new outlook of life is seen, as  Animals can be differentiated into two types, one which is friendly and the other which dangerous. Speaking of dangerous ones is supposed to be found in dark forests and are not likely to stay close to human beings because the mother of hazardous animals has given them a great sense of self-defense, which makes them the most dangerous animals whereas for some mother nature gave to have their food.

Top 10 Most Dangerous Animals In India

Bengal Tiger is the most dangerous animal in India, the national animal of India, also known as the Royal Bengal tiger, featured as yellow to light orange, with stripes ranging from dark brown to black. The Bengal Tiger is especially found in Assam, Bengal, Bihar. It weighs around 325 kgs and attacks human beings miserably.

Asian Elephant is considered an environment designer who plays an essential role in the biodiversity of the wildlife. Even though they hold significant value in the cultural structure of India. They are one of the biggest animals on the earth who hold a weight of 3500 to 6500 kg. They are one of the giant animals on earth. Every year there are 100 to 200 people who get kicked because of mishaps created by Elephants.

Elephants hold the properties of both household and wildlife, and they should carry out smoothly and adequately; otherwise, they can become dangerous for human beings.

Indian Red Scorpion is one of the deadliest animals alive on earth. They are so small almost 2.5 inches to 3 inches of height and can kill anyone with the venom it carries. The toxin mainly affects the cardiovascular and pulmonary systems, eventually leading to pulmonary edema, which may cause death so the Indian red scorpion is known as the world’s deadliest species.

It is considered the fourth-deadliest animal in India, with a population of around 15000, mainly found in Rajasthan and Karnataka. They became deadliest because of the large number and forest shrinkage they lack, which is why they attack human beings in nearby villages.

Primarily found in lowlands, urban and rural areas, this 5 ft animal can kill anyone who comes on its way. Around 1 million people are dead in the last 20 years in India. During cool weather, it alters its behavior and becomes more active during the day. Snake produces an average venom yield of 8–79 mg.

No 6. The saltwater crocodile

The Saltwater Crocodile is 20 feet long animal is one of the deadly animals. The face is large, darker in color, and stripes are present on the lower side of the crocodile and having a heavy set of 68 teethes. Hundreds of people died due to crocodiles in India.

Bull Shark is mainly found in India’s Ganges river, territorial animals are seventh on dangerous animals in India. The bull shark’s food consists usually of bony fish and tiny sharks, that includes other bull sharks and stingrays. They can also feed on turtles, birds, dolphins.

Based on Mythological facts Indian cobra is preyed on in India, especially on Naag Panchami, most snakes are dead in India. The Indian cobra’s venom mainly contains a potent post-synaptic neurotoxin and cardiotoxin. The poison acts on the synaptic gaps of the nerves, thereby paralyzing muscles and in severe bites leading to respiratory failure or cardiac arrest.

The Sloth Bear is dangerous because as the human population increases and they lose their habitats, they continue to attack human beings. The other name of a sloth bear is “labiated bear” as it has a long lower lip and palate that is used for sucking up insects.

Among the Top 10 Most Dangerous Animals In India, The world’s longest venomous snake is taken into our list of most dangerous animals in India. The king cobra’s skin is of olive green color with black and white bands that converge to the head. The king cobra’s diet consists primarily of other snakes and lizards, including Indian cobra, banded krait, rat snake, pythons, green whip snake, keelback, banded wolf snake, and Blyth’s reticulated snake.

Which animal kills most people in India?

Tigers kill most people in India.

What is the number 1 deadliest animal?

Which is the most powerful animal of India?

The elephant is the most powerful animal in India.

What animal kills the most humans per year in India?

King Cobra kills the most humans per year in India.