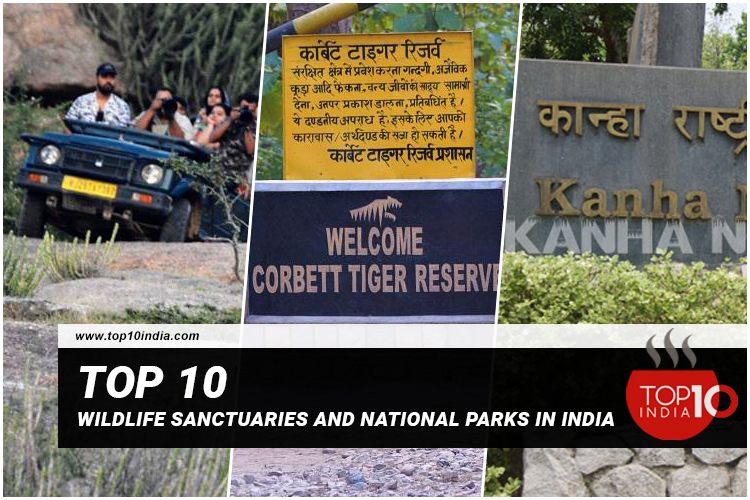 Top 10 Wildlife Sanctuaries And National Parks In India: Jawai Bandh Leopard Conservation Reserve in Rajasthan is the number 1 wildlife sanctuary and national park in India. There is always been fun while exploring wildlife especially in the places where the wild animals have become a part of the mythology and the culture. There are many wildlife sanctuaries and national parks in India that have been established as endangered species.

Many wildlife conservation areas are thriving and giving a chance to people to the animals closely with the efforts of the public and the government. Wildlife Sanctuaries and National Parks are made for the conservation of animals and are usually surrounded by hills, water, and mountains alongside. Here is our list of the top 10 wildlife sanctuaries and National Parks In India.

This place is at the top of the list of wildlife sanctuaries in India because of its geographical features that make this place entirely different from the rest of the wildlife reserves in India. The granite hills can be seen in Jawai, instead of a forest and the shelter is provided to the leopards in the caves built in the rocks.

Jim Corbett is one of the oldest national parks in India which was established in the year 1936 for the protection of the endangered Bengal tiger. It is situated and comes under the boundaries of Pauri Garhwal district and the Nainital district of Uttarakhand and it was originally known as Hailey National Park. It was considered as the first park which comes under the Project Tiger initiative of the government of India and has now become an eminent destination for ecotourism.

Kanha National Park is also known as the Kanha-Kisli National Park and it is the largest national park of Madhya Pradesh. The total area of this park is 1.067 km sq, and it becomes the largest national park in Central India and it has been ranked as one of the 10 most famous places for tourists. This park was established in the year 1955 and it became a Tiger Reserve in the year 1973, this park was also depicted in the famous novel of Rudyard Kipling, The Jungle Book.

Bandipur National park was established in the year 1974 and is located in the state of Karnataka and the total area of this park is 874 km sq. The park is home to a large variety of biomes and the various endangered species as once it was a hunting ground for the Maharaja of Mysore. The borders of Mudumalai National Park, Nagarhole National Park, and Wayanad Wildlife Sanctuary are shared with this park. It is the largest protected area in southern India and it is the largest habitat for wild elephants in South Asia and is also a park of Nilgiri Biosphere Reserve.

The total area of Pench National park is about 758 km sq. and in the year 1965, this wildlife area became a sanctuary and in the year 1975, it got the designation of the national parks and finally it became a tiger reserve in the year 1992. The borders of the two districts i.e. Seoni and Chhindwara are shared with this park with Pench River flowing right through it dividing the park into two distinct blocks. Turiya and Karmajhiri are the two famous entry gates of this park and in the year 2011, it had won the “Best Management Award”.

The total area of Gir National park is about 1,412 km sq. and it is located in the state of Gujarat and is also known as Sasan Gir. It is the only region in the continent where the Asiatic lions are found and it is one of the most important protected areas in Asia. The Nawab of Junagadh established the sanctuary here after the British Viceroys highlighted the serious concern.

This park has an area of 925 km sq. and it is famous for being a tiger reserve and elephant reserve as well. The borders of the two districts, Idukki and Pathanamthitta are shared with this park. There are 171 species of grass and 140 orchid species along with hundreds of flowering plants.

Kaziranga National Park comes under the boundaries of the three districts in Assam which are Golaghat, Nagaon, and Karbi Anglong. There are 2,413 as a total number of rhinos in this park as per census in the month of March in the year 2018. There is the highest density of tigers among the protected areas in the world and it became a large Tiger Reserve in the year 2006.

Ranthambore national park is one of the biggest and the most famous wildlife conservation areas of Rajasthan and it has a total area of 1334 km sq. On 1st November in the year 1980, this park became a national park and at present, it attracts thousands of tourists from all over the world because of the exquisite sightings of the Bengal tigers. In the year 1955, it was originally established as Sawai Madhopur Game Sanctuary. In the year 1973, it came under the Project Tiger and later subsumed two more adjoining sanctuaries which are Swai Mansingh sanctuary and Keladevi Sanctuary.

Which is the biggest wildlife sanctuary in India?

Kaziranga National Park is the biggest wildlife sanctuary in India.

Which is the second largest wildlife sanctuary in India?

Wayanad Wildlife Sanctuary is the second wildlife sanctuary in Kerala.

Which is the first sanctuary in India?

Jim Corbett National Park is the first sanctuary in India.

How many National Parks and wildlife sanctuaries are there in India?

There are 104 existing National Parks and wildlife sanctuaries in India.

Published in A to Z, Animals, Destination, Nature, News and Others