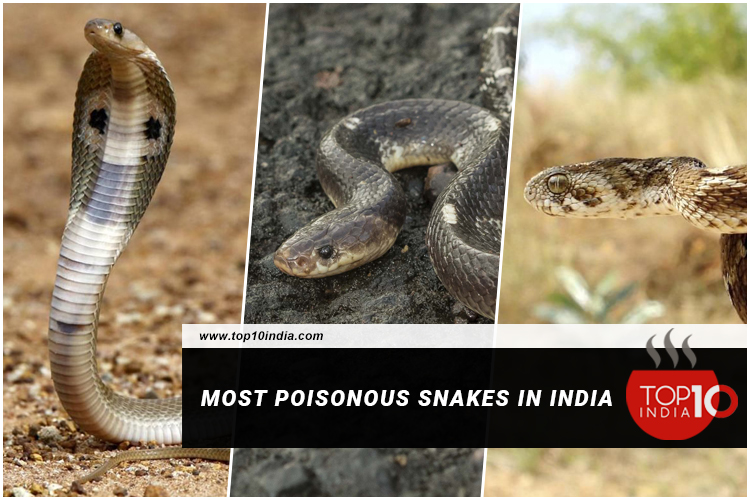 Most Poisonous Snakes In India: Indian Cobra is the number 1 most poisonous snake in India that can kill humans at the fastest with its dangerous venom. India, the world’s second-most populous country after China, is a lovely location to visit with plenty to see and do, such as seeing the world-famous Taj Mahal, but did you know that India is also home to some extremely hazardous snakes? Snakes are a vital component of our country’s ecology, and they generally live in locations like forests and jungles, despite their widespread dread.

Most Poisonous Snakes In India

Even though the majority of snake species are non-poisonous, they are still regarded as dangerous, which is understandable given that most people are unaware of these facts. However, because snakes are true friends of nature, we must learn how important they are in maintaining the balance of our biodiversity system. Snakes usually attack only when they feel threatened; otherwise, they prefer to avoid human contact. To safeguard these magnificent creatures of nature, please stay away from one other. Here is our list of the top 10 most poisonous snakes in India.

The Indian cobra, also known as the ‘naja naja’ in India, is a highly poisonous snake that is one of the ‘big four’ snake species that inflict the most snakebites on humans in the country. This snake is huge and has a misleading eye pattern on the back of its head, as well as a large hood that enlarges when the snake feels threatened.

It is found in habitats such as dense and open forests, rice fields, wetlands, and city outskirts, with altitudes ranging from sea level to 2,000 meters (6,600 feet). If you happen to come across one of these snakes in India, the best thing you can do is carefully back away.

The common krait, also known as the Indian krait or blue krait, is a poisonous snake that, like the Indian cobra, belongs to the “big four” of snakes. This snake is three feet in length, but it may grow up to five feet and nine inches in length! Males have longer tails and grow bigger than females, making them easier to recognize.

Because common kraits are nocturnal, if you’re out late at night, be cautious of any of the above-specified sites to prevent being bitten. This snake’s venom is largely made up of strong neurotoxins that cause muscle paralysis! The nerve terminals near the brain will be affected by some of the other neurotoxins in the venom.

The saw-scaled viper, also known as the echis, is a poisonous snake native to India that is responsible for the world’s highest number of snake bites and deaths. These snakes are located in dry areas of India, such as deserts, sand, rock, soft soil, and scrublands, and there are only about twelve kinds of them. They live under loose rocks and may survive at heights of up to 1982 meters!

If bitten by a saw-scaled viper, the body will release four different forms of toxic toxins: neurotoxins, cardiotoxins, hemotoxins, and cytotoxins. This saw-scaled viper, like the ordinary krait, will emerge in the dark, so be aware of your surroundings and where you walk.

The Russell’s viper snake (daboia russelii) is named after Patrick Russell, a Scottish herpetologist who researched Indian snakes. This is the third of India’s poisonous snakes’ “big four” species.

These snakes have a distinct appearance from the others and can reach a length of 5.5 feet. The Russell’s Viper lives in wooded regions, farmlands, coastal lowlands, and open grassy places, and is usually dark yellow or brown with many black markings.

These snakes are most active at night, but they will also emerge during the day in the cooler months. When threatened, this snake lifts its head and hisses louder than other snakes.

Malabar Pit Viper is found in the Western Ghats of southwestern India. They are sometimes seen near rocks or near streams by trees, however, they are most usually seen during the monsoon season (June-September.)

Because the Malabar pit viper is nocturnal, it has an advanced heat-detecting system that aids them in locating its prey. They’ll use their pits, a unique organ located between the eyes and nostrils, to accomplish this. The capacity of Malabar pit vipers to color morph makes them difficult to recognize. There are several distinct color variants known to exist, including yellow, green, and brown, which is another advantage they have when hunting prey.

Indian rock pythons, also known as python molurus, are non-poisonous snakes native to the Indian subcontinent’s tropical and sub-tropical regions. These snakes can reach lengths of over nine feet and have a snakeskin look, with a white or yellow body and blotched patterns ranging from hues of tan to dark brown, though their color changes depending on where they are located.

The Indian rock python is a slow-moving snake that might be shy. They rarely attack humans or animals, even if they are being attacked, and they walk in a straight line. They are also excellent swimmers and can stay underwater in water for many minutes.

The Banded Krait is one of the largest species of kraits snake found in India’s diverse environment. It’s easy to spot thanks to its characteristic black-yellowish crossbars. This Banded Sea Krait, like the other Krait species, is a highly deadly snake that may be found all over the world, including India.

It is usually found underwater and feeds on India’s coral reefs. It’s even been mistaken for eels at times. The victim frequently misinterprets its tail for its head, which this snake exploits. It’s a little snake with a lot of venoms. Another distinguishing trait of this snake is that, although spending the majority of its time beneath, it would come to the surface to sip fresh water frequently.

The bamboo or Indian green pit viper, which is found in the mountainous regions of the Western Ghat in southern India, is another exceptionally poisonous pit viper and one of India’s most hazardous snakes. The bamboo pit viper can be found in urban settings as well as meadows and woods. It dwells in India’s vines, shrubs, and bamboos, and is arboreal. Apart from a poisonous sting, this snake also has a heat-sensing system. It can grow up to 2.5 feet in length.

In India, the hump-nosed pit viper is a common species. This snake is most active in the early morning and late at night. Mostly found in sections of south India with thick woods, coffee plantations, and steep terrain. This snake is similarly nocturnal and is distinguished by a broad triangular head that is wider than its neck. Because of its inverted and large snout, it is known as Hump Nosed. A lot of people have died as a result of it in South India.

Which is the most poisonous snake in India?

Hump Nosed Pit Viper is the most poisonous snake in India.

Which snake kills most humans in India?

Published in A to Z, Animals, Nature, Social and Sociology & Society