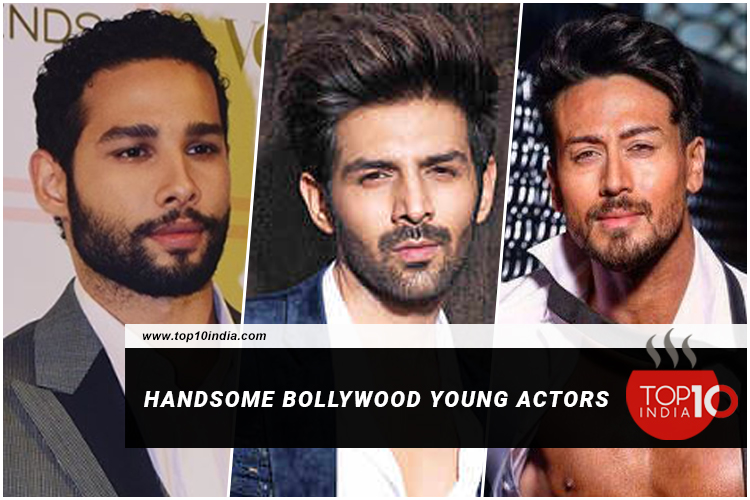 Handsome Bollywood Young Actors: Bollywood is a dream for many, people struggle so much to make their name in this industry. Likewise, there are a set of individuals who have started very early in their life and have grown so much in the very public eye after becoming an actor, and for many, it’s just the beginning.

We all are aware of the big Indian actors and actresses who have spent their life working in movies such as Shah Rukh Khan, Salman Khan, Dharmendra, Madhuri Dixit and so many more. Now, let’s look at the young actors of Bollywood who has a very promising career ahead-

Siddhant Chaturvedi began his career with Amazon Prime Series “Inside Edge” from 2017 -19 and ventured into Bollywood films with a supporting role in the musical drama Gully Boy (2019) and won Filmfare Award for Best Supporting Actor for the same movie. He will be starring in the upcoming Yash Raj movie Bunty Aur Babli 2 co-starring Rani Mukerji, Saif Ali Khan, and Sharvari Wagh. He has also bagged various awards for his role in Gully Boy such as Screen, Zee Cine, and Filmfare Awards for Best Male Debut.

Kartik Aaryan made his debut with the movie – Pyar ka Punchnama, after struggling for three years which turned out to be a huge hit commercially. While pursuing engineering, he tried his luck out in modeling and started attempting to make a career in his films. Apart from acting, Aaryan endorsed several brands and products and co-hosted two award ceremonies. He has also appeared in Forbes India’s “Forbes Celebrity 100” list of 2019.

Tiger Shroff is an actor and martial artist famous for his high-action Bollywood movies. He is the son of renowned actor Jackie Shroff and producer Ayesha Dutt and made his film debut with the action film Heropanti. He is one of the highest-paid actors in India and has been featured in Forbes India’s Celebrity 100 list since 2018. He has won many awards such as Stardust Awards, BIG Star Entertainment Awards in 2014, IIFA Awards, and Life Ok Screen Awards in 2015.

Born to the action director Sham Kaushal, before taking up a career in the films, he assisted Anurag Kashyap in the crime drama Gangs of Wasseypur (2012). He rose to prominence with various supporting roles in 2018 from the movies Raazi and Sanju. And also he won Filmfare for Best Supporting Actor for the movie Sanju in the same year. He played the role of a military officer in a critically acclaimed and commercially successful action movie URI: The Surgical Strike, making him win the National Film Award for Best Actor in the following year.

Varun Dhawan is one of the highest-paid actors in Bollywood and has been featured in Forbes India’s celebrity 100 lists since 2014. He has even eleven box-office successes in a row throughout his career hence becoming the only actor in Hindi cinema to do so. He is the son of veteran director David Dhawan and became successful through prominent roles in movies such as Main Tera Hero (2014), Dishoom(2016), Sui Dhaga (2018), and many more.

Aditya Roy Kapur made his debut in 2009 but rose to fame with his 2013 movie Aashiqui 2.He is also the youngest brother of Bollywood film producer Siddharth Roy Kapur and actor Kunal Roy Kapur. He received positive reviews from critics for his role in the movie Malang (2019) and has won Big Star Entertainment Awards (2013), Best Supporting Actor in International Indian Film Academy Awards (2014), and many more.

Rajkumar Roy, with his performance, has become one of the best Indian actors to look out for. Rao who got graduated from the University of Delhi went on to study acting at a film institute in Mumbai. He got a breakthrough with the drama film Kai Po Che in 2013. He rose to fame with his acting in critically acclaimed biographical drama Shahid (2013), for which he was subsequently awarded National Film Award and Filmfare Critics Award for Best Actor.

Sidharth Malhotra is an Indian model and actor who has debuted in Bollywood movies after working as a trainee assistant to Karan Johar for the film My Name Is Khan (2010). Since then he has worked in various movies with no prior connection in the Bollywood industry. He has also collaborated with PETA to create awareness about dogs apart from many other activities.

Ayushmann Khurrana is an Indian actor, singer, writer, and television host. He is one of those actors who have stood out with his roles, battling social norms and trends. Time Magazine has even been named him as one of the 100 most influential people in the world (2010). In addition to his acting roles, Khurrana has even sung in almost all his movies. His performance in Andhadhun and Article 15 won him Filmfare Critics Award as well as National Award best actor.

Diljit Dosanjh is an Indian singer-songwriter, actor, and television presenter who works in Punjabi and Hindi Cinema. He is also one of the leading artists in the Indian Music Industry. He has earned the Filmfare award for Best Male Debut with his Bollywood movie Udta Punjab. He had also worked as a judge for three years, in reality, show Rising Star, and won 5 PTC Awards for Best Actor.

Q1. Who is the youngest actor of Bollywood to feature in this list?

Ans. Siddhant Chaturvedi is the youngest actor to feature in Bollywood movies according to this list.

Q2. Who has the highest net worth among these actors?

Ans. As of now, the highest net worth among these actors is of Varun Dhawan with $29 million.