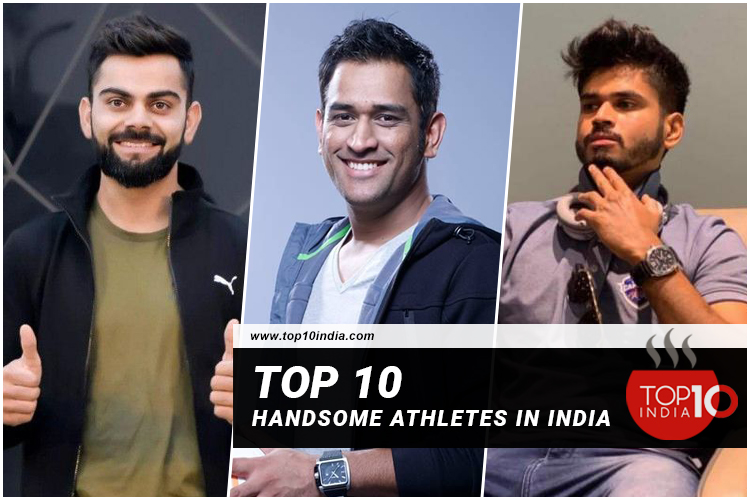 Top 10 Handsome Athletes In India: An athlete is a person who competes in one or more sports which involve physical strength, endurance, speed, and stamina. Athletes may be professional or immature. Most professional athletes have particularly well-developed physiques obtained by extensive physical training and strict exercise accompanied by a strict dietary regimen.

Virat Kohli is ranked in the first position in the list of top 10 handsome athletes in India. The next handsome came from India who is on today’s date known worldwide for his wonderful playing skills. Being the captain of the cricket team he has won the heart of everyone. Virat Kohli is an Indian cricketer and current captain of the Indian National cricket team in all formats. He was born on 5 Nov 1988. His nickname is Cheeku. Kohli is regarded as one of the best contemporary batsmen in the world. He made his test debut on 20 June 2011 against West Indies.

Mahendra Singh Dhoni is also known as M.S Dhoni. He is a former Indian international cricketer who captained the Indian National Team in limited-overs formats from 2007 to 2017 and in Test Cricket from 2008 to 2014. Under his captaincy, India won the inaugural 2007 ICC World Twenty 20, 2010, and 2016 Asia Cups, the 2011 ICC World Cup, and the 2013 ICC worlds Champions Trophy. A right-handed middle-order batsman and Wicket Keeper. He is widely regarded as one of the greatest wicket-keeper batsmen and captains in the history of the game. He was also the first wicket-keeper to effect 100 stumpings in ODI cricket.

The full name of Shreyas Iyer is Shreyas Santosh Iyer. He is an Indian cricketer who plays for India in international cricket, Mumbai in domestic cricket, and captains Delhi capitals in the Indian Premier League. A right-handed top-order batsman, Iyer has played One Day Internationals and Twenty Twenty Internationals for the India National Cricket Team. He played for the India Under-19 Cricket Team at the 2014 ICC Under-19 Cricket World Cup. Iyer was spotted by coach Pravin Amre at the Shivaji Park Gymkhana. Amre trained him in his early cricketing days. Iyer’s teammates at the age-group levels used to compare him to Virender Sehwag.

The full name of Vijender Singh is Vijender Singh Beniwal. He is an Indian Professional Boxer and politician. As an amateur, he won bronze medals at the 2008 Beijing Olympics, 2009 World Championships, and the 2010 Commonwealth Games, as well as silver medals at the 2006 and 2014 Commonwealth Games, all in the middleweight division. In June 2015, Vijender Singh turned professional and signed a multi-year agreement with Queensberry Promotions through IOS Sports and Entertainment. This ruled him out of the 2016 Olympics which would have been his fourth.

Sunil Chhetri is an Indian professional footballer who plays as a striker or winger and captains both Indian Super League side Bengaluru FC and the Indian National Football Team. Popularly known as “Captain Fantastic”, Chhetri is the fourth-highest- international goalscorer among active players, after Christiano Ronaldo, Ali Mabkhout, and Lionel Messi, and 13th-highest of all time, as of June 2021. He is both the most-capped player and all-time top goal scorrer for his national team.

Yuvraj Singh is a former Indian international cricketer who played in all formats of the game. One of the greatest limited-overs players to play the game, Yuvraj was particularly noted for his aggressive and elegant stroke play and match-winning all-round performances for India. He is an all-rounder who bats left-handed in the middle order and bowls slow left-arm orthodox. He scored 362 runs and scalped 15 wickets in the 2011 ICC world cup and won the man of the series award. He was also one of the top performers in the 2007 ICC World T20 both of which India won.

Rohit Kumar is an Indian professional Kabaddi player who plays in the Pro Kabaddi League. Rohit Chillar is a well-recognized player in the Indian kabaddi world. Rohit Kumar Chillar was born on 19 January 1990 in Nizampur town in the region of Panipat, Haryana. Rohit Kumar Chillar’s dad was likewise a kabaddi player who was working in the Delhi police office. His dad was the person who upheld him through the entirety of his destructions and pushed him harder to accomplish a profession in his energy.

Vishal Bhardwaj is an Indian professional kabaddi player who plays in the Pro Kabaddi League. He plays for the Telugu Titans in the Season 6 of PKL. He’s known to be an exciting young all-rounder who is able to use his sheer strength to pull the opposition raider back into his half. The youngster was chosen as the captain for the Titans in the current season. The ankle-hold and back-hold being his strengths, Season 5 was his breakthrough campaign where he scored 71 tackle points and was the third most successful defender. He averaged 3.22 tackle points per match, the second-best in Season 5.

The full name of Hardik Pandya is Hardik Himanshu Pandya. He is an Indian international cricketer who plays for Baroda in domestic cricket and Mumbai Indians in the Indian Premier League(IPL). He is an all-rounder who bats right-handed and bowls right-arm fast-medium. His elder brother Krunal Pandya is also an international cricketer. Financially weak, the Pandya family lived in a rented apartmentGorwa, with the brothers using a second-hand car to travel to the cricket ground. Hardik studied at the MK High School until ninth grade before dropping out to focus on cricket.

Rohit Gurunath Sharma is the full name of Rohit Sharma. He is an Indian international cricketer who plays for Mumbai in domestic cricket and captains Mumbai Indians in the Indian Premier League as a right-handed batsman and an occasional right-arm off-break bowler. He is the vice-captain of the Indian National team in Limited overs formats.

Outside cricket, Sharma is an active supporter of animal welfare campaigns. He is the official Rhino Ambassador for WWF-India and is a member of People for the Ethical Treatment of Animals(PETA). He has worked with PETA in its campaign to raise awareness of the plight of homeless cats and dogs in India.

Q- Who is the most handsome athlete in India?

A- Virat Kohli is the most handsome athlete in India.

Q- Who is the most handsome athlete in the World?

A- Christiano Ronaldo is the most handsome athlete.

Q- From which games most handsome athelets are there in this list?

A- From cricket there are many handsome athletes in India.