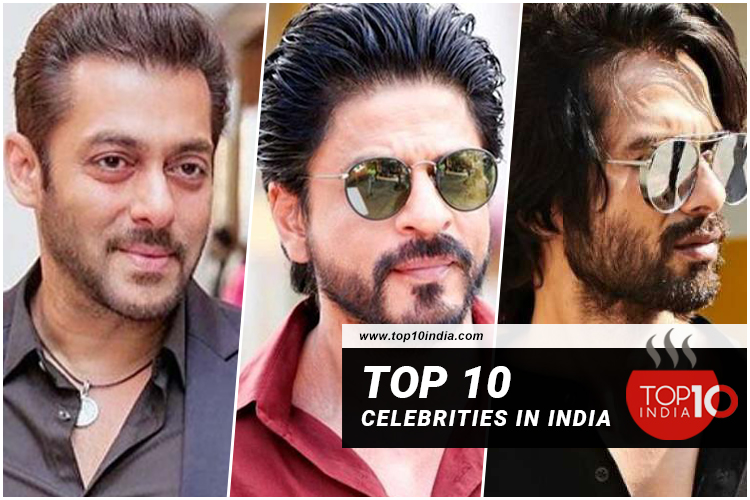 Top 10 Celebrities In India: Celebrity is a condition of fame and broad public recognition of an individual or group, or occasionally a character or animal, as a result of the attention given to them by mass media. A person may attain a celebrity status from having great wealth, their participation in sports or the entertainment industry, their position as a political figure, or even from their connection to another celebrity.

The full name of Salman Khan is Abdulrashid Salim Salman Khan. He is an Indian Actor who works in the Bollywood industry. Besides being an actor, he is also a producer, television personality, singer, and philanthropist. Salman is popularly known as “Sallu Bhai” and “Bhaijaan” by his fans. He has won many awards during his filming career. The son of the screenwriter Salim Khan, the actor began his acting career with a supporting role in ‘Biwi Ho To Aisi’ in 1988. From then to today he is giving his fans and country the best films as much as he can. He has done many roles of different kinds like comic roles, romantic roles, and even drama.

Shah Rukh Khan is a very known Indian actor, film producer, and television personality. He made his acting debut with the television serial Fauji. After this, he was seen in many television shows. Later, he moved to Mumbai, to began his movie career. He made his movie debut in 1992 with the movie Deewana. He became a known actor by his movies Darr and Baazigar. He is co-chairman of the motion picture production company Red Chillies Entertainment. He has won 297 awards out of 338 nominations in his career. In 2005, he was honored with the Padma Shri by the Government of India.

Shahid Kapoor is a very amazing Indian actor. He is the son of the actor Pankaj Kapur and Neelima Azma. When he was there years old, his parents got divorced. Before acting he worked as a background dancer in the movies- Taal and Dil To Pagal Hai. He was also seen in music videos of Kumar Sanu and the band Aryans. He made his acting debut with the movie Ishq Vishq, but the movie didn’t perform well at the box office. He gained popularity with the movie Vivah. In 2017, he topped the list of 50 Sexiest Asian Men in the World by Eastern Eye magazine. In 2019, his wax figure was unveiled at Madame Tussauds Singapore.

Aamir Khan is a very known Indian actor, director, filmmaker, and television host. Before starting acting, he became the assistant director of Nasir Hussain in Movies Manzil Manzil and Zabardast. He made his movie debut with the movie Holi, but the movie didn’t perform well on Boxoffice. After this, he worked for the movie Qyamat Se Qyamat Tak, this movie gave popularity to both Aamir and Juhi. In 1999, he launched his production company Aamir Khan Productions. Lagaan was the first movie of his production, and this movie has won several awards. He made his television debut with his talk show Satyamev Jayate.

Amitabh Bachchan is a very known actor, producer, television host, playback singer, and former politician. He is regarded as the Shahenshah of Bollywood, and Star of the Millenium for his incredible success in the film industry. He made his film debut in 1969 as a voice narrator in Bhuvan Shome. He made his acting debut with the movie Saat Hindustani. His career takes off after his movie Zanjeer, in which he played the role of an angry young man. After his hit movie Collie, he was diagnosed with Myasthenia gravis, which made him weak physically and mentally. After taking a break for 3 years and joining politics in this period.

Virat Kholi is a very famous personality of India. From scoring up centuries to procuring double hundreds, Virat Kohli rules the pitch every year with a breathtaking game across all arrangements of the game. He is the captain of the Indian Cricket team and also is the captain of the IPL team Royal Challengers Banglore. Virat Kohli ties the knot with the famous and talented Bollywood actress Anushka Sharma. Their wedding pictures were an internet sensation. This couple is one of the most loved celebrity couples in India.  He also earned huge fame and respect when he took leave when his wife was pregnant. Virat Kohli’s net worth is Rs. 980 crores.

Hrithik Roshan is a famous Indian actor. He is often referred to as one of the most charming male stars in the nation. Hrithik has earned six Filmfare honors. The hero became a passion among youthful girls with his first movie Kaho Na Pyaar hai with the beautiful actress Ameesha Patel. With the movie Koi Mil Gaya and Krrish, Hrithik proved himself as one of the best actors in the movie industry. Hrithik is the son of popular actors Rakesh Roshan and Pinky. The actor also flagged from stammering, a speech dysfunction for a while. Hrithik tied a knot with Sussanne Khan, daughter of the artist Sanjay Khan in the year 2000.

Ranbir Kapoor is a celebrated Indian on-screen actor and filmmaker. He is one of the most generously compensated on-screen actors of Hindi film and has been included in Forbes India’s Celebrity 100 rundown since 2012. Kapoor is the beneficiary of a few honors, including six Filmfare Awards. He made his acting debut with Bhansali’s unfortunate sentiment Saawariya (2007), a basic and business disappointment. The sentimental show Rockstar (2011), in which he played a disturbed artist, and the satire dramatization Barfi! (2012), in which he played a sprightly hard of hearing and quiet man, earned Kapoor two back-to-back Best Actor grants at Filmfare.

Ranveer Singh Bhavnani is an Indian actor who shows up in Hindi movies. The beneficiary of a few honors, including three Filmfare Awards, Singh is among the most generously compensated on-screen actors in the nation and has been highlighted in Forbes India’s Celebrity 100 rundown since 2012. He picked up acclaim for playing a melancholic cheat in the show Lootera (2013) and set himself up with his joint efforts with Sanjay Leela Bhansali, starting with the sentiment Goliyon Ki Raasleela Ram-Leela (2013). He won the Filmfare Award for Best Actor for the previous and the Filmfare Critics Award for Best Actor for the last mentioned.

All the years have been a very gratifying year for the Khiladi star Akshay Kumar since he is giving hits from years that to consecutively. All his movies with different social messages are well-received at the box office and the fan’s recognition was also tremendous for starring in a film that encourages various important issues of the society. He is one of the fittest actors we have in our nation. It was a senior that recommended that he should try modeling. Because of his accomplishment as a model, he was proposed movies. He is also famous for doing his stunts on his own in the movies. Akshay Kumar’s net worth is Rs. 2500 crores.

Q- Who is the most famous celebrity in India?

A- Salman Khan is the most famous celebrity in India.

Q- Who is the richest celebrity in India?

A- Shah Rukh Khan is the richest celebrity in India.