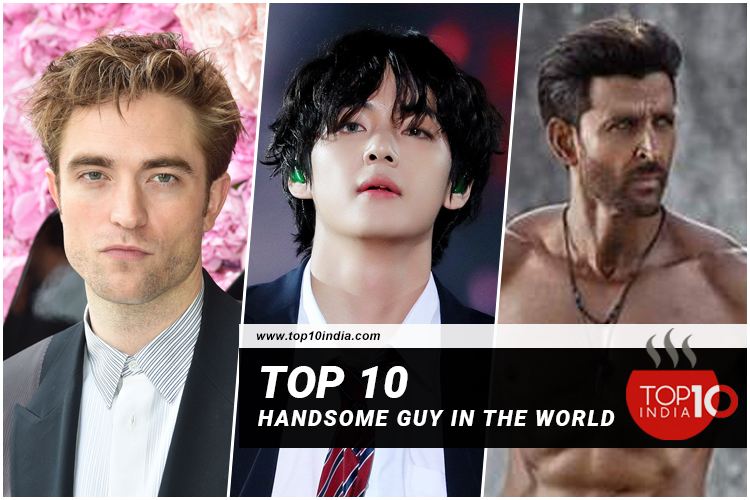 Top 10 Handsome Guy In The World: Handsome guy can be referred to by his physical attractiveness and by his human physical appearance. Physical attractiveness is the degree to which a person’s physical features are considered aesthetically pleasing or beautiful. The term often implies sexual attractiveness or desirability, but can also be distinct from either. There are many factors that influence one person’s attraction to another, with physical aspects being one of them. Humans are acutely sensitive to their physical appearance. Some differences in human appearance are genetic, others are the result of age, lifestyle, and disease, and many are the result of personal adornment.

Top 10 Handsome Guy In The World

Robert Douglas Thomas Pattinson is the full name of Robert Pattinson. He is an English actor who works in the Hollywood film industry. He is mostly known for his versatile roles in both big-budget movies and independent films. He is being ranked among the world’s highest-paid actors.

He is mainly known for his character Edward Cullen in the Twilight series. According to the science and Golden ratio of beauty phi(Perfect face measurement) Robert Pattinson’s face structure was found to be 92.15 percent accurate which proof that, why he is top the list of the world’s most handsome man 2021.

Kim Tae-Hyung is also known by his stage name V. He is a South Korean actor, singer, and songwriter. He is a vocalist of the South Korean boy group BTS. V was born Kim Tae-Hyung on December 30, 1995, in the Seo District of Deagu, South Korea.  V first aspired to be a professional singer in elementary school. He began taking saxophone lessons in early middle school as a means of pursuing a career.  V enrolled in Global Cyber University—he graduated in August 2020 with a major in Broadcasting and Entertainment.

Hrithik Roshan is an Indian actor who works in the Hindi film Industry. He has portrayed a variety of characters and is known for his great dancing skills. He is considered one of the highest-paid actors in India. He has also performed on stage and debuted on television with Just Dance (2011). As a judge on the latter, he became the highest-paid film star on Indian television. He is involved with a number of humanitarian causes, endorses several brands and products, and has launched his own clothing line.

He is referred to as Greek God because of his stunning looks, Masculine body, and especially Beautiful eyes. Multiple times Forbes listed him as the highest-paid actor in Bollywood.

Christopher Robert Evans is the real name of Chris Evans. He is an american actor, who is famously known for his role as Captain America in the Marvel Cinematic Universe series of Films. He begans his career with his roles in television series in 2000. He enjoyed musical theatre as a child, and attended acting camp. He played Randolph MacAfee in the musical Bye Bye Birdie. He and siblings also performed in front of relatives during Christmases; recalling that being onstage “felt like home”. Before starting his senior year of high school, Evans spent the summer in New York City, and took classes at the Lee Strasbag Theatre and Film Institute.

Ryan Rodney Reynolds is the real name of Ryan Reynolds. He is a Canadian Actor, film producer, and entrepreneur. He began his career starring in the canadian teen soap opera Hillside. Reynolds’s biggest commercial success came with the superhero films Deadpool, in which he played the title character. He his mainly famous for his character in deadpool. The former set numerous records at the time of its release for an R-rated comedy and his performance earned him nominations at the Critics Choice Movie Awards and the Golden Globe Awards.

Times magazine ranked him in the “100 Most Influential People” in the world, and also People’s magazine chose him as the sexiest man in the world. In 2008, he married Scarlett Johansson in a private ceremony and divorced in 2011, and since 2012, has been married to American actress Black Lively.

Thomas Cruise Mapother IV is the real name of Tom Cruise. He is an American actor and producer. He has received various accolades for his work, including three Golden Globe Awards and three nominations for ACademy Awards. He is one of the highest-paid actors in the world. His Films have grossed over $4 billion in North America and over $10.1 billion worldwide, making him one of the highest-grossing box office stars of all time. Cruise began acting in the early 1980s and made his breakthrough with leading roles in the comedy film.

The real-life action hero, Tom Cruise is an American actor and producer, born on July 3, 1962, in Syracuse, New York, U.S. He has appeared in several hit movies including, Edge of Tomorrow, Mission Impossible series, Knight and Day, Jack Reacher, Oblivion, Top Gun, and many more.

Despite his character’s death in the twentieth episode of the first season, Somerhalder returned to the role of Boone for seven more episodes between 2005 and 2010, including the series finale. Somerhalder was the first major character to die.

Cristopher Hemsworth is te full name of Chris Hemsworth. He is an Australian actor. He first rose to prominence in Australia playing Kim Hyde in the Australian television series Home and Away. Hemsworth is best known for playing Thor in eight Marvel Cinematic Universe films, beginning with Thor (2011) and appearing most recently in Avengers: Endgame. These movies established him along the world’s highest paid actors.

He began his film career with Star Trek in 2009 and gained international recognition after playing the Thor character in MCU films. Apart from MCU, he has also been part of several superhit movies, Red Dawn, Star Trek, 12 Strong, Men in Black: International, and the latest Extraction. In 2014, Hemsworth defeated Chris Pratt to top the chart of people’s magazine Sexiest Man Alive list.

Robert John Downey Jr. is the full name of Robert Downey Jr. He is an American actor and producer.  His career has been characterized by critical and popular success in his youth, followed by a period of substance abuse and legal troubles, before a resurgence of commercial success in middle age. He was listed by Forbes as Hollywood’s highest-paid actor. He stayed in a court-ordered drug treatment program and has maintained his sobriety since 2003.

Q- Who is the most handsome guy in the world?

A- Robert Pattinson is the most handsome guy in the world.

Q- On which basis handsome guy is classified?

A- Handsome guy can be classified by physical attractiveness, human body appearance.

Q- Is there any Indian Guy on the list of top 10 handsome Guy in the world?

A- Hrithik Roshan is listed in the listed of top 10 handsome guy in the world.