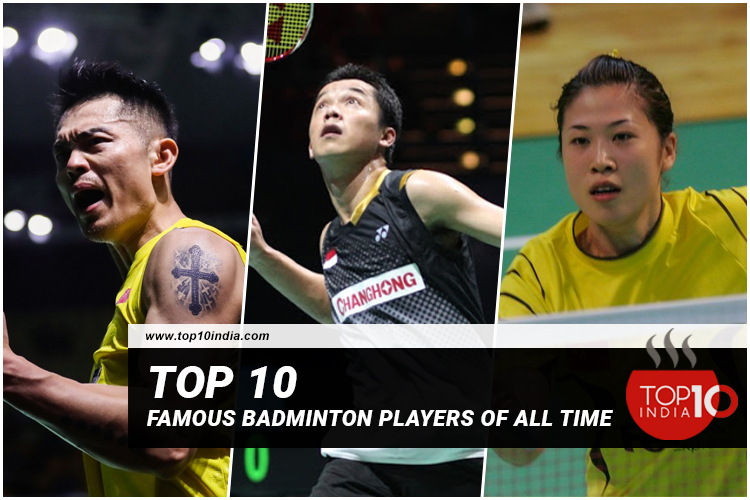 Top 10 Famous Badminton Players Of All Time: Badminton is a racquet sport played using racquets to hit a shuttlecock across a net. Although it may be played with larger teams, the most common forms of the game are “singles” (with one player per side) and “doubles” (with two players per side). Badminton is often played as a casual outdoor activity in a yard or on a beach; formal games are played on a rectangular indoor court. Points are scored by striking the shuttlecock with the racquet and landing it within the opposing side’s half of the court.

Lin Dan is a Chinese former professional badminton player. He is a two-time Olympic champion, five-time World champion, as well as a six-time All England champion. Throughout his career, it is very rare that he has won a bronze medal and that is why he is “Super Dan’. His amazing achievements include two back to back gold medals in Olympics, 5 gold and a bar of silver in the World Championships, 2 gold medals in the Badminton World Cup, 5 gold and 2 bronze medal in the Thomas Cup, 3 gold medals in the Asian Games, 3 gold medal in Asian Championships and the title of Hong Kong East Asian Games in 2009.

Gao Ling is regarded as the most successful doubles player Chinese female Badminton Player. She is famous for her anticipation, consistency, and ever-smiling face. She dominated the Badminton era in mixed and women’s doubles match-winning two gold, one bronze, and won silver in Olympics. Her other feathers in the cap are four gold medals in Badminton World Championship, three gold medals in Sudirman Cup, and five gold medals in Uber Cup.

Datuk Lee Chong Wei is a Malasyian former badminton player. As a singles player, Lee was ranked first worldwide for 349 weeks, including a 199-week streak from 21 August 2008 to 14 June 2012. He is the fourth Malaysian player after Rashid Sheikh, Roslin Hashim, and Wong Choon Hann to achieve such a ranking. It all started on 21st August 2008 when he became the only Malaysian player to hold World No. 1 rank for a record consecutive 199 weeks. The rivalry of Lin Dan and Lee Chong Wei on the court is famous as their friendship off court.

Li Lingwei is a Chinese badminton player of the 1980s who ranks among the greatest in the history of the women’s game. Elected as a member of the International Olympic Committee in 2012. In December 2016, she was elected Vice President of the Chinese Olympic Committee. Li is heavily involved in improving women’s participation and fair representation in sport. Inducted in the international Badminton Hall of Fame in 1998 she won 3 gold medals and two silver medals in BWF World Championships in 1985 and also achieved the World Grand Prix singles title.

Tony Gunawan is an Indonesian-born American former badminton player. He gained several international achievements for Indonesia and later for the United States, including Olympic Gold Medal and World Champion title. With 358 international titles, he is the most successful doubles player in the world. Playing with three different partners he won gold in men’s double 2000 Sydney Olympic Games, titled 2001 Seville World Championships and Anaheim 2005 World Championships.

Morten Frost  is a former badminton player and later coach, who represented Denmark. As a player, he spent twelve years in the top three of the world rankings.  Frost won almost every available top level championship, except the World Badminton Championships where he scored a silver medal twice (1985 and 1987). When he lost his second World Championship in the finals, the headlines rang out “The World’s greatest badminton player may never be World Champion.” While this may be the enduring footnote to his career, Frost dominated at the much coveted All England Open Badminton Championships.

Peter Gade is a former Danish professional badminton player. He currently resides in Holte in Copenhagen. He has two children with the former handball player Camilla Høeg. Gade made his mark in badminton history through his All England Open Badminton Championships singles title in 1999 and his five European Championships crowns in the men’s singles event. He topped the world rankings from 1998 to 2001. With his 22 Grand-Prix titles, he has become one of the sport’s most successful players. On June 22, 2006, he briefly recaptured the number one spot in the world rankings.

Han Aiping was a Chinese badminton player in the 1980s who ranks among the greats of the woman’s game. Noted for her superb overhead strokes, she and her teammate, rival, and sometimes doubles partner Li Lingwei dominated international singles play for most of the decade, each winning the IBF World Champions twice, and led the Chinese team to victory in Uber Cup(women’s world team) competitions.

Q- Who is the most famous badminton player of all time?

A- Lin Dan is the most famous badminton player of all time.

A- No, there is no Indian player in this list.

Q- Who is the best badminton player in the world?

A- Lin Dan is the best badminton player in the world.