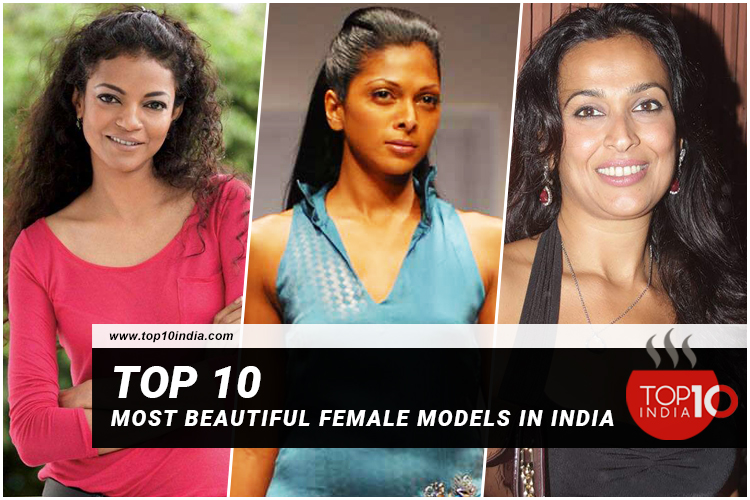 Top 10 Most Beautiful Female Models In India: Noyonika Chatterjee is the number 1 most beautiful female model in India who is uplifting her career well. Models are no longer only the product of designers’ imaginations. Rather, it has evolved into a career. The models have gained their well-known status due to their distinct and unique attributes. They are both attractive and gifted performers. They are not only attractive but also possess exceptional skills and abilities. They’ve cemented their place in the realm of glitz and gloss. Their drive, determination, and good looks have all contributed to their long-term success.

She also teaches other models and choreographs for them. She has performed in countless ramp performances and has established herself as the queen of the ramp. Her strength is her confidence in her ability to handle any circumstance appropriately.

Nina Manuel is a well-known fashion model. She was born and raised in Mumbai. She has grown up with the ambition of being a famous person in the world. In 1995, she took part in I FEMINA LOOK for the first time. She has also been in a number of music albums and has worked with a number of organizations, including Indian Express, Coca-Cola, and others.

Her net worth is in millions of dollars, yet no exact statistics have been published anywhere on the internet. She is well-known for her modeling career, and her dedication has landed her at number two on India’s best models list.

In 1992, this well-known model has crowned Femina Miss India. Madhu Sapre married in the year 2001. She resumed her modeling career after her marriage and maintains a perfect balance between her married and professional lives. She was a talented athlete, but modeling had always been her ambition. She was a standout and a gold medalist in the discus throw in college. She rose to prominence in 1992, when she competed in the Miss Universe contest and finished second runner-up.

Sheetal Mallar was born on April 2, 1974, in New Delhi, India. She is a well-known Indian fashion model who began her career in 1994. She is a supermodel from India. She went to Mumbai for her education and graduation. But she dropped out of school to pursue a career in the glamourous world.

She has done a lot of modeling and has also signed a lot of publications. Many well-known companies have supported her. She married a tennis player from Italy. She continued her modeling profession after her marriage and became a successful model.

Diandra is a well-known fashion designer, host, and model. Her education was completed in Mumbai. Madhu Sapre inspired her to pursue a career in modeling. Her debut show for McDowell’s was a success. She has modeled for a number of international fashion shows. Diandra has also appeared on Big Brother 8. She is a daring model.

She was one of the first models to walk the runway without going bald. She was a firm believer in always defying preconceptions. She also appeared in season four of Khatron ke Khiladi. Her audacity is well-known, and her quality has landed her at #5.

Bipasha Basu, The actress and model’s attractiveness is reflected in the name. Her nickname is Bips, and she was born in Delhi, India, on January 7, 1979. Her height is 5 ft 8 inches and her weight is 63 kg. She married Karan Singh Grover and lives happily ever after with him. She grew up with his younger sister and parents in a Bengali family.

She landed in the realm of success with passion in her eyes and dedication in her heart. She has worked on a number of modeling and film projects. Ajnabee was her first picture, in which she played a bad part. Following that, she was working on back-to-back major film projects. On the runways, this stunning diva’s complexion always draws attention.

Nethra Raghuraman is a South Indian beauty, who has made a name for herself in the modeling world. She was born in Vadodara, Gujarat, on November 29, 1976. Her height is 175 cm and her weight is 64 kg. She is a well-known tall dusky actress and successful model with imposing physical features. Even though she has dark skin, she is still the top option for runway displays.

In 1997, she began her modeling career. She acted in a few Bollywood films and is best remembered for her roles in Thakshak and Bhopal Express. Her later on-screen films were not as successful. Nethra also appeared in the inaugural season of Akshay Kumar’s Khatron Ke Khiladi show. She is blissfully married to Kunal Guha, her life partner.

Ujjwala Raut is one of the most popular models in the world. On June 11, 1998, she was born. Her height is 5 ft 10 inches, and she has black hair and brown eyes. She is a lovely Indian model, spent her childhood with her parents and sister. She is a member of a Marathi family. Her father always encouraged both of her daughters to pursue their goals, despite her coming from an Orthodox and non-frank home.

She won the Femina Miss India beauty contest in 1996. Her sister inspired her to pursue a modeling career. Ujjwala Raut is one of the most well-known Indian actresses in the world. Her dedication to the job propelled her to the top of the modeling industry.

On December 28, 1978, in Mumbai, Maharashtra, India, this Beautiful Model was born. Her height is 5 feet 8 inches, her weight is 55 kg, and her body measurements are 34-24-34. Her hair is black, her eyes are dark brown, and she is Asian/Indian in ethnicity. Carol’s zodiac sign is Capricorn, and she practices Christianity. She is a stunning film actor as well as a stunning runway model.

She has acted in films in Tamil, Hindi, English, and Telugu, among other languages. She began her acting career in the year 2005 with the film Cyrus. Bluffmaster and Aisa Ye Jahan are two other films in which she has appeared. She rose to prominence as a result of the reality series Khatron Ke Khiladi and Big Boss.

Sadhika is a Bollywood actress who has starred in a number of films. Jesse collaborated with a number of designers and is one of the most successful models with attractive characteristics. In the 1994 Miss India pageant, Jesse was a finalist alongside Aishwarya Rai Bachan and Sushmita Sen. She began modeling in 1990 and was the first runner-up in the reality show Khatron Ke Khiladi. The runway Tigre is another nickname for her.

Bipasha Basu is the hottest model in India 2021.

Who is the most beautiful model in India?

Jesse Randhawa is the most beautiful model in India.

Who is the most famous female model?

Ujjwala Raut is the most famous female model.

Who is the No 1 model in the world?

Among the Top 10 Beautiful Female Models In India, Noyonika Chatterjee is the number 1 model in the world.