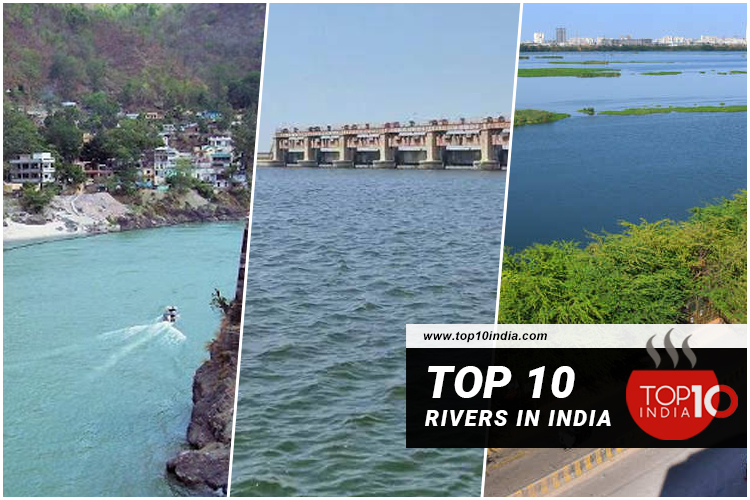 Top 10 Rivers In India | Rivers With Start To End Point

Top 10 Rivers In India | Longest Rivers With Start To End Point: The river Ganga is the number 1 longest river in India that starts from Gangotri and ends in the Bay of Bengal has a length of 2510 km. India is among the world’s oldest civilizations, with a diverse cultural legacy. India is frequently referred to as the Land of Rivers. Himalayan rivers and Peninsular Rivers are the two types of rivers found in India. Around 90% of the water flows to the east of India and into the Bay of Bengal. The remains of the rivers travel towards India’s western coast and into the Arabian Sea.

The rivers of India provide a rich source of water for irrigation purposes. Rivers in India are also considered religious as river Ganga where people worship this holy river. Rivers have their length too some are long and some are small. We hereby mention the longest rivers with start to endpoints namely the top 10 rivers in India.

Ganga reaches the plains in Haridwar in Uttarakhand after traversing the majority of the Himalayas. Ganga runs across Uttar Pradesh, Bihar, and Jharkhand before forming a delta that allows it to safely reach Bengal and West Bengal. Hugli River, which flows from Kolkata to the sea, is formed by one arm of the Ganga. Another arm of the Padma River emerges in Bangladesh, where it flows into the Sunderban, the world’s largest mangrove swamp.

The river Godavari starts in the Western Ghats of central India at Nashik, Maharashtra, and ends in the Bay of Bengal, 80 kilometers (50 miles) from the Arabian Sea.

The Yamuna River, sometimes known as the Jumna, is a large river in northern India, flowing predominantly through the states of Uttarakhand and Uttar Pradesh.

The River Narmada starts in the Amarkaanta hills in Madhyapradesh and ends in the Indian borders, similar to the Mahi and Tapti rivers. The Narmada is the west’s largest flowing river. Narmada is the heart of rivers as it is located in central India. The Narmada River is the only river in India that runs in a rift valley running west amid the Vindhya and Satpura Mountain Ranges.

The main tributaries of the Krishna River include the Vienna River, Koyna River, Dudhganga River, Bhima River, Ghataprabha River, Malaprabha River, Tungabhadra River, Musi River, and Dindi River. The Krishna is beneficial not just in irrigation and hydroelectric projects, but also in tourism.

The river Indus starts from western Tibet and ends in the Arabian sea. Sindhu is another name for the Indus. It springs from a glacier in the Kailash Mountain range at Bokhara Chu (31°15′ N latitude, 81°40′ E longitude) in the Tibetan area at an altitude of 4,164 m.

The Brahmaputra starts from Kailash and ends in the Bay of Bengal. Brahmaputra river is one of India’s major rivers, rises from Tibet’s Angsi glacier in the Himalayas. The Tsangpo River is the name given to the Brahmaputra, as the Top 10 Rivers In India. The Brahmaputra is known as the Dihang River as it enters India from Arunachal Pradesh.

Among the Top 10 Rivers In India, The river Tapti starts from Madhya Pradhesh and ends in the Gulf of Khambhat with a length of roughly 724 kilometers, it is one among Peninsular India’s major rivers, flowing east to west. The Tapiriver begins at a height of about 752 meters near Multai in Madhya Pradesh’s Betul district and flows for about 724 kilometers before emptying into the Arabian Sea through the Gulf of Cambay.

Which is the longest river in India?

Ganga is the longest river in India.

Which is longer Ganga or Brahmaputra?

Ganga is longer than Brahmaputra.

Which is the deepest river in India?

The Ganga is the deepest river in India.

Published in A to Z, General knowledge, Nature, Others, Social and Sociology & Society