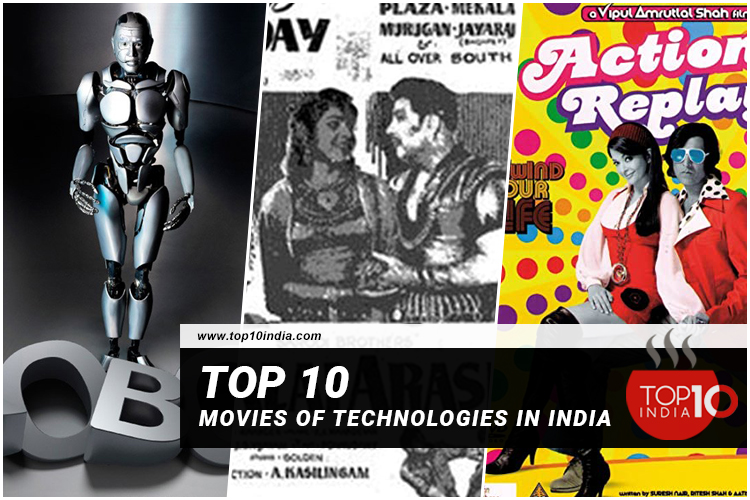 Top 10 Movies of Technologies In India: Technology in movies used to be a joke. But with the advent of awesome computer animation, it’s no longer outlandish to execute someone’s vision of the future in a movie. Now sci-fi writers and tech creators can use movies to paint the road ahead and inspire millions of people to make their visions into a reality. Moreover, as luminaries such as Mark Zuckerberg have learned, these movies are also a way to get a particular view of tech history established as the official view of how something like creating a company went down.

Top 10 movies of Technology in India

In many of the movies, the theme is the dangers of new technology. These films ask ethical questions, like what it means to be human or the difference between a human and an android. Many are about making our wildest fantasies come true or paint hackers as the knights who will take on corporate dragons—the themes harp on the need to get off the grid and return to a more innocent time. The best films are a kind of distant mirror, reflecting on our society by giving us a glimpse of its future.

No.1 Robot or Enthiran

Plot:- After a decade of research, the scientist K. Vaseegaran creates a sophisticated humanoid robot with the help of his assistants, Siva and Ravi, to commission it into the Indian Army. He introduces the robot, named Chitti, at a robotics conference in Chennai. Chitti helps Sana, Vaseegaran’s medical student girlfriend, cheat in her examination, then saves her from being assaulted by a group of thugs in a local train. Vaseegaran’s mentor, Professor Bohra, is secretly engaged in creating similar android robots for a German terrorist organization but has so far been unsuccessful. The terrorists give him a month to have the robots ready. Otherwise, they will kill him.

Plot:- Mohan is an honest and hard-working farmer. Vani is the daughter of the rich landlord who lives in the city while their lands are under the supervision of her cousin and suitor, the wily Kannan. On a visit to the village with her friends, Vani meets Mohan. Mohan and Vani find themselves falling in love with each other gradually. Meanwhile, a spacecraft is moving rapidly towards the earth. Inside are two aliens who resemble earthly humans. From their conversation, it is understood that they are traveling to Earth on a strange mission. Apparently, their planet has made far-reaching strides in science but is woefully backward in performing arts. Hence they are coming to Earth to identify and take a talented artist who could teach their denizens music and dance.

Plot:- The story focuses on Bunty (Aditya Roy Kapur), who does not want to get married because of the loveless relationship between his parents. Bunty’s girlfriend, Tanya (Sudeepa Singh), keeps proposing to him, but he always rejects. Finally, she takes Bunty to her grandfather, Anthony Gonsalves (Randhir Kapoor), who happens to be a scientist and works on a time machine. Anthony asks Bunty why he refuses to get married. Bunty says that he is scared of marriage because his parents seem so unhappy with theirs.

Post:- Cargo is a 2019 Indian Hindi-language science fiction film written and directed by Arati Kadav. The film is produced by Kadav, Shlok Sharma, Navin Shetty, and Anurag Kashyap. Starring Vikrant Massey and Shweta Tripathi in the lead roles, the story is set on a spaceship named Pushpak 634A, where a demon Prahastha works for the Post Death Transition services with the help of a female astronaut, where dead people are recycled for rebirth. Cargo premiered at the 2019 MAMI Film Festival under the spotlight section. The film premiered on Netflix on 9 September 2020.

Post:- The film starts with the death of a renowned neurologist named Pramodh (R. Amarendran). His gym trainer, Dheena (Sai Dheena), is seen paying respects at the funeral before leaving. The plot then shifts to a young crime inspector named Kumaran (Sundeep Kishan), who is chasing a petty thief and witnesses Dheena murdering his wife. Kumaran chases Dheena, who corners him and halts him with a blow to his head. In an ensuing tussle, Kumaran manages to kill Dheena.

No.6 The Alien (Top 10 Movies of Technologies In India)

Plot:- The plot revolves around a spaceship that lands in a pond in rural Bengal. The villagers begin worshiping it as a temple risen from the depths of the earth. The alien, known as “Mr. Ang,” establishes contact with a young village boy named Haba (meaning “Dumb” in Bengali) through dreams and also plays several pranks on the village community in the course of its short stay on planet Earth. The plot contains the ebullient presence of an Indian businessman, a journalist from Calcutta, and an American engineer.

No.7 Mission Mangal (Top 10 Movies of Technologies In India)

Post:- In Bengaluru, at ISRO, after the failed launch of GSLV-F06 on 25 December 2010, due to a small mistake by Project Director Tara Shinde, Rakesh Dhawan, a fellow scientist working with her, takes the blame for her. As a result, he is relocated to work on Mangalyaan as punishment. The new GSLV missions are given to Rupert Desai, a NASA scientist of Indian origin. The MoM (Mars Orbiter Mission) is thought of as an impossible mission by his coworkers due to its aim of reaching Mars with its tight budget.

No.9 Ra.One (Top 10 Movies of Technologies In India)

Post:- Jenny Nayar (Shahana Goswami), an employee of UK-based company Barron Industries, introduces a new technology that allows objects from the digital world to enter the real world using wireless transmissions from multiple devices. As a result, Shekhar Subramanium (Shahrukh Khan), who also works for the company, is given a final chance to devise a video game with a difference. To impress his skeptical son Prateek (Armaan Verma), and upon the request of his wife Sonia (Kareena Kapoor), Subramanium uses his son’s idea that the antagonist is more powerful than the protagonist.

Plot:- The DSD team, which has Mahendran (Jayaprakash) at its helm, find that an asteroid will hit earth in seven days. The lives of four crore people in and around Chennai are at stake. The only way to destroy the asteroid would be with a heavy missile. But seeing as there’s less time, there’s only one way to obtain the missile, through illegal means. So the team goes ahead with this secret mission with only the Prime Minister, Home Minister, and defense minister. The biggest challenge now is to take it to space, which expert thieves will only possible.

The robot is the no.1 technology movie in India.

2. Which is the first technology movie in India?

Kalai Arasi is the first technology movie in India.

3. Which is the most famous technology movie in terms of profit?

Mission Mangal is the most famous technology movie in terms of profit.

4. Which technology movie was released worldwide?

Ra. One is the technology movie that was released worldwide.