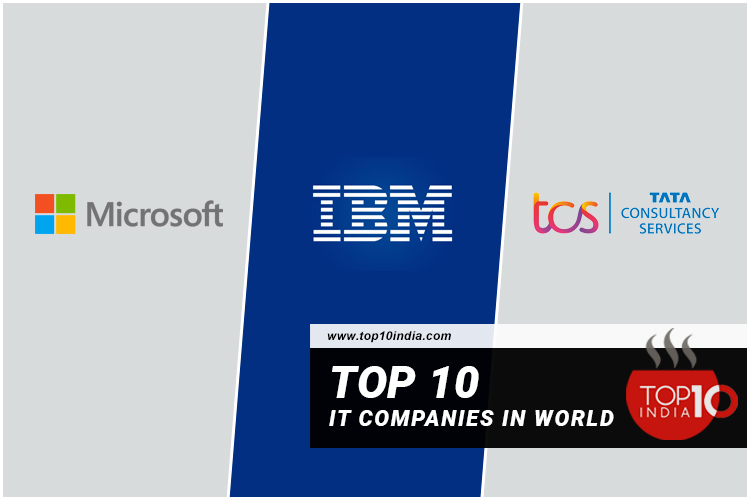 Top 10 IT Companies in World:- Information Technology is the main component in computer science and technology in the world. Information Technology and Software Companies are the fastest growing sector with incredible revenue in the World. IT industry deals in various primary products, including software, software technology, distribution, and software product development and claims as to the software industry. Below is the list of the top 10 IT Companies in World 2021.

Top 10 IT Companies in World

The world is a leading Hub of the IT sector and computer science, where technological innovations reshape the world. The Transformation in technology like cloud computing, artificial intelligence (AI), machine learning, robotics, Internet of Things (IoT), and virtual reality is raising the lifestyle of Humans in every aspect all around the globe. Today, we will discuss some top Information Technology Companies in World.

Microsoft Corporation is in the first position in the list of top 10 IT companies in the World. Microsoft Corporation is headquartered in Redmond, Washington, which deals in various products like Microsoft Windows, Microsoft Office, and Internet Explorer, etc., which are being used in every computer in the world. Microsoft was founded by Bill Gates and Paul Allen on 4 April 1975. Microsoft acquired Linkedin for 26.2 billion dollars in 2016 and skype for 8.5 billion dollars in 2011. Microsoft focuses on new innovative technologies like Machine Learning, AI, and cloud computing to provide robust solutions for various users.

International Business Machine (IBM) is an American Multi-National Company and is operational in more than 150 countries. The company was established on 16 June 1911 as a computing recording company but was later renamed IBM (International Business Machines). IBM is headquarters in Armonk, New York. It deals in various software products, cloud computing, cognitive computing, data analytics and Internet of things, IT infrastructure, and security, expanding the current growing needs of existing and new users.

TCS or Tata Consultancy Services is one of the largest IT and Software companies in the World. It is an Indian Multinational and the largest IT Company in India in terms of Revenue. This company begins in year 1968 founded by Tata Sons, which is headquarters in Mumbai, Maharashtra. The company deals with IT services, Software solutions, Consultancy services, Engineering services & solutions, etc. TCS provides employment to 4,20,000+ employees in 149 locations across 46 countries. It is a better option where you can find your dream job and set your career.

Larsen And Turbo, commonly known as the L&T, is one of the best and world’s top 5 construction companies. This is an Indian Multinational Technology, Engineering, Construction, Manufacturing, and Financial Services Conglomerate founded by Two Danish Engineers taking Refuge in India. L&T was established in the year 1938 and accelerated in approx 30 Countries with LTI’s Mosaic platform enabling their mobile, social, analytics, IoT, and cloud journeys.

Infosys is an Indian multinational Information Technology Company that deals in Outsourcing processes, Business Consulting, and IT. This company was established in the year 1981 which is considered the second-largest IT industry in Inda. It is the first Indian IT company listed in NASDAQ, headquartered in Bengaluru, India. It deals with IT services, Software solutions, Consultancy services, etc. The company’s total revenue was 87,371 crore in the year 2019, with a count of 2,28,000+ employees.

HCL Technologies is one of the best leading Information Technology services companies in the world. HCL raised the level of businesses through Digital Technology Transformation. This Company is a subsidiary of HCL group, which was established on 11 August 1976 by its founder Shiv Nadar and Headquarters in Noida. HCL deals in Financial Services, Manufacturing, Telecommunications, Publishing, Entertainment, Retail & CPG, Life Sciences, Oil & Gas, Energy & Utilities, Travel & Logistics. The company has corporate offices in 32 countries with a worldwide network of Research & Development, innovation labs, and employment to over 159,000 employees.

Wipro Limited is a leading Indian multinational company and one of the world’s top 5 Information Technology Companies. This company began on December 29 in 1945, and was formerly known as Western India Palm Refined Oil Limited. It is headquartered in Bengaluru, India. It deals with IT services, Software solutions, Cognitive Computing, Hyper-automation, robotics, cloud analytics, Consultancy services, etc. The company’s total revenue was 63,862 crore in 2020 and employed 1,75,000+ employees across the six continents.

Oracle Corporation is another company on this list. Oracle is a multinational computer technology corporation that was established on June 16, 1977. Oracle was founded by Larry Ellison, Bob Miner, Ed Oates in Santa Clara, California, but now it is headquarters in Texas, United States. The company is widely known for its ERP solutions, database development and management, supply chain management software, and Customer relationship management software. Oracle has a presence across a wide variety of industries in more than 150 countries. Oracle provides business software and applications such as Oracle Applications, Cloud, Database, Servers, workstations, storage, and Enterprise Manager.

Last but not least, Cognizant is in the tenth position in the list of top 10 companies in the world. Cognizant is one of the leading American multinational IT companies that helps clients transform their existing business operating models and technology models with the rapidly changing digital technology. Cognizant is the most admired and fastest-growing company globally, which was established on 26 January 1994. It has its headquarter located in Teaneck, New Jersey, U.S. The revenue of Cognizant is consistently growing, and it has increased from $7.7 Billion to $16.65 billion currently in 2020 with the hard work of employees around 260,000 workforces.

FAQ (Top 10 IT Companies in World)

Q- Which is the largest IT company in the World?

Microsoft Corporation is considered the largest IT company in the world.

Q- Which is the largest IT company in India?

Tata Consultancy Services is considered the largest IT company in India.

Q- Who is the richest man in the world?

Jeff Bezos of Amazon Industries is the world’s richest person.

Q- Is Google an IT company?