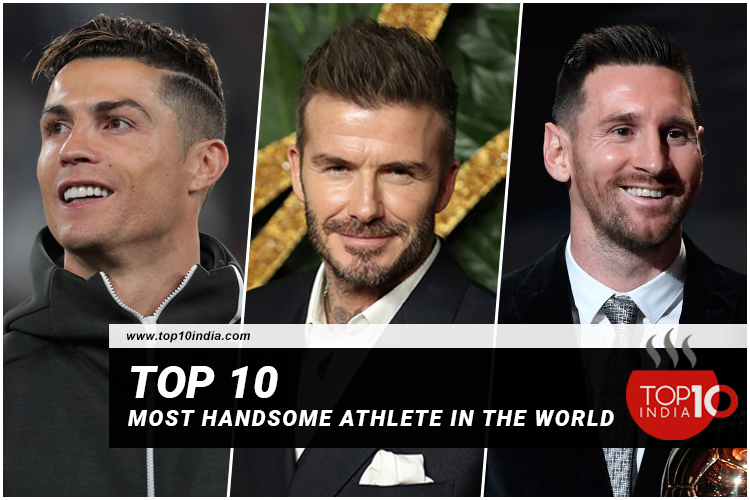 Top 10 Most Handsome Athlete in The World

Top 10 Most Handsome Athlete in The World: An athlete is a person who competes in one or more sports that involve physical strength, speed, or endurance. The use of the term in several sports, such as golf or auto racing, becomes a controversial issue. Athletes may be professionals or amateurs. Most professional athletes have particularly well-developed physiques obtained by extensive physical training and strict exercise accompanied by a strict dietary regimen.

Top 10 Most Handsome Athlete In The World

Doesn’t matter if you follow football or not but if you have a habit of going through sports news or sports section of TV or newspaper even once a day; there are high chances you would be aware of his name. The full name of Cristiano Ronaldo is Cristiano Ronaldo dos Santos Aveiro. He was born on 5 Feb 1985. He is a Portuguese professional football player and plays for the Portuguese national team. He is considered the best football player in the world and regarded as the greatest player of all time.

The full name of David Beckham is David Robert Joseph Beckham. He was born on 2 May 1975. He is an English former professional footballer.  He is the current president and Co-owner of Inter Miami CF.  He played for many clubs like Manchester United, Real Madrid, Milan, Noth End and many more. Beckham is a fashion icon and his popularity extends beyond Football supporters. Beckham was the most searched person in the years 2003 and 2004 according to Google.

The full name of Lionel Messi is Lionel Andres Messi. He was born on 23 June 1987. He is an Argentine professional footballer. He plays as a forward and as a captain both for the Spanish club Barcelona In the Argentina national team. considered as the best player in the world and widely regarded as one of the greatest players of all time. He made his debut in football on 17th Oct 2004. Messi became the second footballer (and second team-sport athlete) to surpass $1 billion in career earnings.

Being the captain of the cricket team he has won the heart of everyone. Virat Kohli is an Indian cricketer and current captain of the Indian National cricket team in all formats. He was born on 5 Nov 1988. His nickname is Cheeku. Kohli is regarded as one of the best contemporary batsmen in the world. He made his test debut on 20 June 2011 against West Indies. Kohli has the second-highest number of centuries and the highest number of centuries in run-chases in the world.

The full name of Neymar Jr. is Neymar da Silva Santos Junior. He is a Brazillian professional foortballer. He plays as a forward for Ligue 1 club in Brazill national team. He was born on 5th Feb 1992. He is widely regarded as one of the best players in the world. Neymar came into prominence at Santos, where he made his professional debut aged 17. With 64 goals in 103 matches for Brazil since debuting at age 18, Neymar is the second-highest goalscorer for his national team.

The full name of Rafael Nadal is Rafael Nadal Parera. He was born on 3 June 1986. He is a Spanish professional tennis player.  He is ranked No. 3 in the world by the Association of Tennis Professionals. Nadal was coached by his uncle Toni.  His father is a businessman, owner of an insurance company, glass, and window company Vidres Mallorca, and the restaurant, Sa Punta. Rafael has a younger sister, María Isabel. He made his debut in international tennis in 2003.

The full name of Olivier Giroud is Olivier Jonathan Giroud. He was born on 30 Sep 1986. He is a French professional footballer. He plays as a forward for the Premier League club Chelsea and the France national team. Highly regarded for his work rate, strength, shot power, and consistent goalscoring ability, he is often named as one of the most underrated strikers in world football. He began his career at Grenoble in Ligue 2 before joining Tours in 2008.

The full name of J.J. Redick is Jonathan Clay JJ Redick. He is an American professional basketball player. He plays for the Dallas Mavericks of the National Basketball Association. He is known for his height, his well-built body, and for being incredibly handsome. He is a passionate player of the sport, which only adds to his attractiveness. Redick was born in Cookville, Tennessee, the son of Jeanie and Ken Redick. His father played basketball for two seasons at Ohio Wesleyan University, and his older twin sisters, Catie and Alyssa, both played for Campbell University.

This super-skilled player from the country is no exception when it comes to beauty. This 6ft 1inch 38-year-old player has been in the list of Top 10 tennis players since 2002. He has regarded as the greatest tennis player of all time by many commentators and other experts in his fraternity. Roger has won 7 single grand slams and is married to Mirka Federer since 2009. His long locks of hair coming over his headband while playing add charm to his already magnificent personality. He was born on 8th Aug 1981.

The full name of Paulo Dybala is Paulo Exequiel Dybala. He was born on 15 nov. 1993. He is an Argentine professional footballer who playes as a forward for Serie A club Juventus and the Argebtina National Team. Dybala began his club career in 2011 with Instituto De Cordoba; he joined Palermo in 2012, at age 18, in a transfer worth a reported €8 million, where he established himself as one of the world’s best young players and won a Serie B title. In 2015, Dybala signed for Juventus for an initial €32 million fee, and has won five league titles, four Coppas Italia, was voted in the Serie A team of the year four times.

Q- Who is the most handsome athletein the world?

A- Christiano Ronaldo is the most handsome athlete in the world.

Q- From which sports most handsome athlete are considered?

A- From Football most handsome athlete are considered.

Q- Who is the most handsome Indian Athlete?

A- Virat Kohli is the most handsome athlete in India.