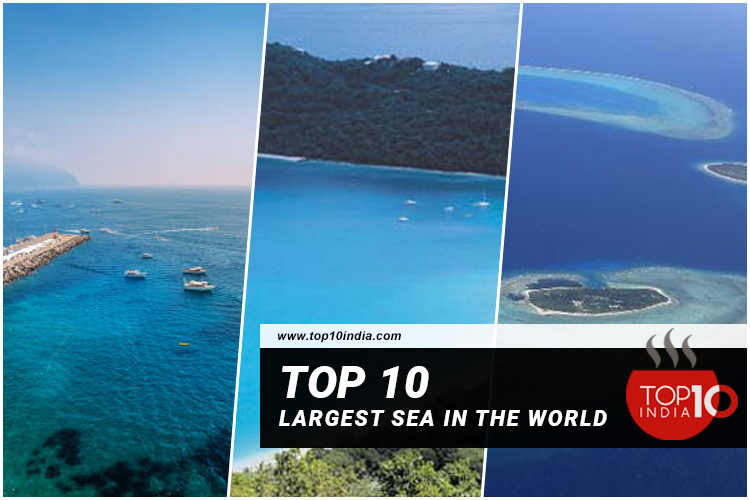 Top 10 Largest Sea in the World:- The sea, or simply the ocean, is the body of salty water that covers over 70% of the Earth’s surface. The sea moderates Earth’s climate and has important roles in the water cycle, carbon cycle, and nitrogen cycle. Many organisms, including bacteria, protists, algae, plants, fungi, and animals, live in the sea.

Top 10 Largest Sea in the World

The sea is the interconnected system of all the earth’s oceanic bodies, including the Atlantic ocean, Pacific ocean, Indian ocean, southern ocean, and Arctic ocean. Earth is the only planet on the solar system with seas of liquid water bodies, although Mars possesses ice caps and similar planets in the solar system.

The Mediterranean sea is a sea connected to the Atlantic ocean and surrounded by the Mediterranean Basin, enclosed by water. This sea has also played a central role in the history of western civilization. It has an average depth of 1500 m, and the deepest point recorded point is 5267m. Moreover, the sea was an important route for merchants and travelers of ancient times.

The Caribbean sea is an American Mediterranean sea of the Atlantic ocean in the tropics of western hemispheres. Mexico and Central America surround it. The entire area of the Caribbean sea has numerous islands of the west indies, which are collectively known as the Caribbean. It is also one of the largest seas, and it also has the world’s second-largest barrier reef, the Mesoamerican Barrier Reef.

No.3 The South China Sea

The South China Sea is a marginal sea of the Western Pacific Ocean. The shallow waters south of the Riau Islands are also known a the Natuna Sea. It is a region of tremendous economic and geostrategic importance, about one-third of the world’s maritime shipping passing through it carrying over 3trillion US$ in trade each year. It contains oil, natural gas, and fisheries which are crucial for the food security of millions of Southeast Asia.

The Bering Sea is a marginal sea of the Northern Pacific Ocean. It divides between the two largest landmasses on earth: Eurasia and The Americas. The Bering Sea was named after Vitus Bering, a Danish navigator in Russian service who was the first European to systematically explore it by sailing from the Pacific Ocean to the Arctic Ocean.

No.5 The Gulf Of Mexico

The Gulf of Mexico is an ocean basin and a marginal sea of the Atlantic ocean mainly surrounded by the North American continent. The US states of Texas, Louisiana, Mississippi, and Florida act as the border of the Gulf and are often regarded as the Third Coast of the United States. The Gulf of Mexico took around a 300million years ago as a result of plate tectonics.

No.6 The Sea Of Okhotsk

The Sea of Okhotsk is a marginal sea of the western Pacific Ocean. It is located between Russias Kamchatka Peninsula on the east to the island of Sakhalin in the west. The sea was named after Okhotsk, the first Russian settlement in the Far East. It is connected to the Sea of Japan on either side of Sakhalin. It covers an area of about 15,83,000 square kilometers.

No.7 The East China Sea

The East China sea is an arm of the Western Pacific Ocean located directly offshore from East China. It covers an area of around12,49,000 square kilometers. Most of the East China Sea is shallow, with almost three-fourths of it being less than 200 meters.

Hudson bay is a large body of saltwater in northeastern Canada with a surface area of 12,30,000 square kilometers. It is situated north of Ontario, west of Quebec. The Eastern name of Hudson bay and Jams bay is Winipekw, meaning muddy or brackish water.

The Sea of Japan is the marginal sea between the Japanese archipelago, Sakhalin, the Korean peninsula, and the Russian mainland. Like the Mediterranean sea, it has almost no tides due to its nearly complete enclosure from the Pacific Ocean.

The Andaman Sea, historically known as the Burma sea, is a marginal sea of the northeastern Indian ocean bounded by the coastlines of Myanmar and Thailand. It is separated from the bay Bengal to its west by the Andaman Islands and the Nicobar Islands.

1. Which is the largest sea in the world?

The Mediterranean sea is the largest in the world.

2. Which is the deepest ocean in the world?

The Pacific Ocean is the deepest sea in the world.

3.Which is the smallest sea in the world?

The  Arctic sea is the smallest in the world.

4. Which sea is the busiest sea throughout the year?

The South China Sea is the busiest sea throughout the year.

Published in A to Z, Country, General knowledge, Nature and News