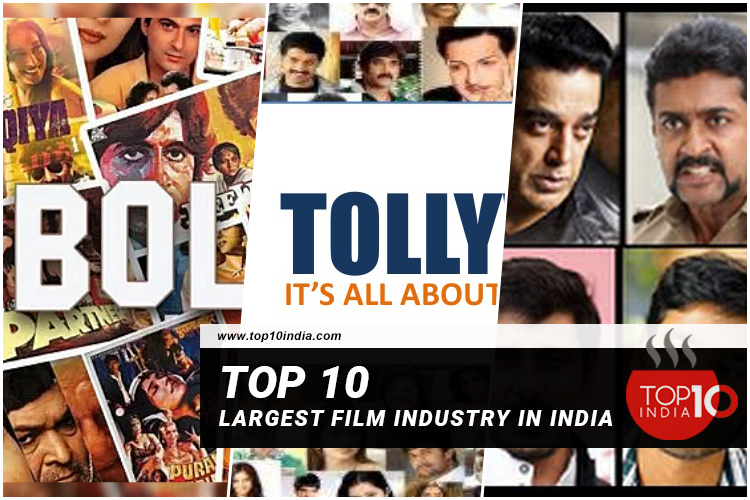 The film industry shows different types of music, dance, different places around the world. Some of these movies show beautiful scenic views. The first movie that was ever made was a silent movie; then, the sound movie was introduced after that black and white movie. Mughal e Azam was the first movie that was half black and white and half colored. After that, colored movies started coming. We are introducing you to the top 10 largest film industries in India.

Bollywood is the most famous and largest film industry in the world. It has the largest number of people working in it. Bollywood produces a maximum number of films in a year. Bollywood makes Hindi movies. The main center of Bollywood is Mumbai, a Film city where most of the shootings happen.

Bollywood has given us some amazing superstars and some great movies. It makes 43% of total revenue from Box-office. Raja Harishchandra was the first silent movie that was made in India in 1913. Ardeshir Irani’s Alam Ara was the first sound movie made in 1931, and it was a commercial film that did very well, and it was a major success.

Tollywood is the 2nd largest film industry in India. Tollywood is known as Telugu Film Industry. The films produced in Tollywood are in the Telugu language. The movie is mainly watched in Andhra Pradesh, Hyderabad, and Telangana. First, a silent Telugu film was made in 1921, and it was known as Bhishma Pratigna.

Tollywood has Guinness World Record for largest film production word wide. Around 26% of the box office revenue is generated through Tollywood.

Ollywood is one of the largest film industries in India. The films are made in the Odia language. It is based in Cuttack, Odisha. The name given to the industry is a mixture of Odia and Hollywood. In 1936 the ollywood movie started. The first sound movie was Sita Bihaha in 1936, and Mohan Sundar Deb Goswami created it. Ramayan inspired the movie; the plot revolves around the marriage of Ram and Sita.

One of the most famous and largest film industries is the Bengali Film Industry that makes Bengali films. One of the best theatre and cinematic films is made in Bengali Industry. The industry makes most parallel and art films. The filmmakers have a great sense of theatre. Many films from the Bengali Industry are internationally known and have won many national awards in India. Around 70-100 movies are made in a year by Bengali Industry.

The Bhojpuri Film Industry is based in Bihar and Uttar Pradesh. The industry is also known as Bhojiwood. The industry is worth Rs 2000 crores, and it is still growing at a rapid phase. The industry is loved for its amazing songs and funny movie. The movie is seen in North America, Asia, and Europe.

Kannada Film Industry is popularly known as the Sandalwood industry. The movie industry is made in the Kannada language. The industry is based in Bengaluru. They have made almost 100 movies a year. The movies get screened on around 950 screens in Karnataka. Some of these movies are also watched in Germany, Australia, and United States.

Punjabi Film Industry is also known as Pollywood or Punjabi Cinema. The movie is made in the Punjabi language. The movie is seen across Punjab and Lahore. The industry is popular for its funny movie, music. Heer Ranjha is one of the most famous movies from Punjab.

The Bollywood movie industry is the biggest in India.

Bollywood Film Industry is the number 1 film industry in India.

Tollywood is the second-largest film industry in India.