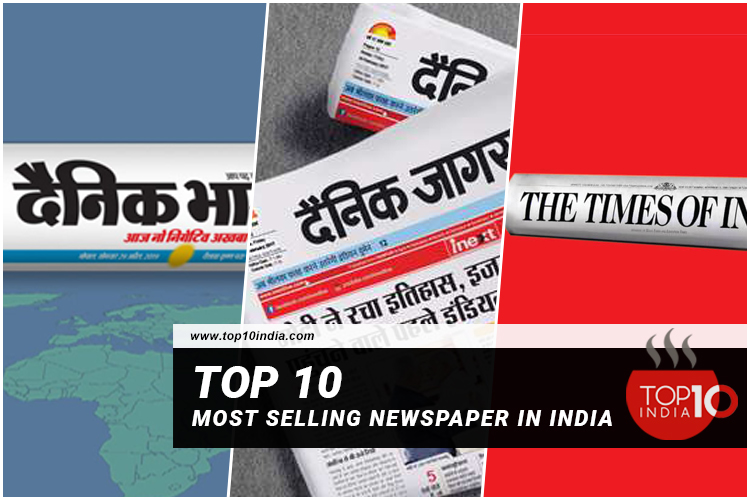 Top 10 Most Selling Newspaper In India

Top 10 Most Selling Newspaper In India: Dainik Bhaskar is the number 1 most selling newspaper in India that mentions all the current updates of the country. Newspapers, which have been in use since time immemorial, are a need in daily duties since they bring us up to date with the current developments in the country and around the world. The first newspaper in India, The Bengal Gazette, was established in 1780 under the British Raj by James Augustus Hickey. Despite other emerging media, the newspaper serves as a watchdog for democracy in the country and is an important medium for disseminating information and forming opinions among the nation’s teeming people.

Top 10 Most Selling Newspaper In India

The habit of reading the newspaper on a daily basis has been recognized as one of the most important aspects of the life of an alert, aware, and responsible citizen of the country. Whether you believe it or not, India has the world’s second-largest newspaper market, with over 100,000 publications, 240 million circulations, and, to top it off, 1300 million readers. Among these figures, the Hindi language daily came out on top, as it is the most popular newspaper sold in India in terms of circulation and market share. Here is our list of the top 10 most selling newspaper in India.

Dainik Bhaskar is reported to be India’s only daily newspaper with a circulation of one million copies and is also regarded as one of the top ten Hindi newspapers. The Dainik Bhaskar group owns this publication. Madhya Pradesh is claimed to be the state where this newspaper is most regulated and sold, and it is one of India’s fastest-growing daily newspapers in terms of readership.

It is read in eleven Indian states. It is one of India’s fastest-growing newspaper dailies, and it has received numerous honors throughout the years.

The Hindi newspaper Dainik Jagran, which is owned by Jagran Prakash Limited and syndicated in 11 Indian states, was founded by freedom fighter Puran Chandra Gupta during the ‘Quit India Movement in 1942.

Dainik Jagran has its headquarters in Kanpur, Uttar Pradesh. It is India’s most widely circulated and read newspaper, containing all of the most recent news and updates from all fields. Dainik Jagran’s average issue readership (AIR) is 1.66 crore.

No 3. Times of India

Bennett, Coleman and Company Limited, the flagship wing of India’s largest media conglomerate, The Times Group, created it. The Times of India has been published for 177 years, beginning in 1838. It is one of India’s oldest and most well-known newspaper brands. The most frequently read career-oriented paper is Times Ascent, a supplement of the daily published every Wednesday.

Hindustan Dainik is India’s fourth most widely circulated newspaper, and it’s also the country’s third most widely read daily. It is published in 21 editions throughout the Hindi belt and is also available in paper versions online. It used to be a part of the HT media limited group, but in 2009, the Hindi business was spun off into a new company called Hindustan media ventures limited.

Amar Ujala is the most widely circulated Hindi language daily newspaper. It has a staggering 3 million copies in circulation and one of the biggest readerships in the country. According to an Indian readership poll from 2017, it has the fourth-largest leadership in India with 46.094 million readers.

Amar Ujala, a Hindi daily, joins the list of India’s top newspaper brands. It was established a year after the country’s independence in 1948. Amar Ujala Publications Ltd owns Amar Ujala. It is based in Noida, Uttar Pradesh, and covers a wide range of topics, including politics, business, sports, and entertainment.

Malayala Manorama was founded in Kottayam and became Kerala’s second most popular daily after Deepika. However, when it comes to circulation, you’ll be shocked to learn that Malayala Manorama is the state’s most widely circulated newspaper. The newspaper began as a weekly publication in 1890 and now has a readership of over 20 million people and a circulation of over 2.4 million copies.

Malayala Manorama, a Malayalam newspaper, is the most popular and frequently read newspaper in the southern part of India. Malayala Manorama Company Limited of Kerala founded in 1980. Malayalam Manorma owns and operates 15 printing units across the country.

In Delhi, Mumbai, and Lucknow, Nav Bharat or NBT is one of the most widely read and largest Hindi newspapers. Bennett Coleman & Co. Ltd (BCCL) published it, which is also known for producing other daily newspapers like the Times of India, Economic Times, Maharashtra Times, and magazines such as Filmfare and Femina. You might be shocked to learn that NBT is one of the BCCL group’s oldest products.

No 8. The Hindustan Times

The Hindustan Times is India’s third most popular English newspaper by readership, behind The Times of India and The Hindu. The journal was founded by Mahatma Gandhi in 1924 and served as a nationalist and pro-Congress daily during the Indian independence movement. The proprietor of this newspaper, Shobhana Bhartia, is one of India’s most prominent women. It is the flagship publication of HT Media, a company controlled by the Birla family’s KK Birla.

Punjab Kesar is a Hindi-language newspaper that is distributed in Punjab, Haryana, Rajasthan, Delhi, and Himachal Pradesh. The daily is owned by the Punjab Kesari group and is one of four publications launched by the company. The others are Hind Samachar in Urdu, Jagbani in Punjabi, and Navodaya Times in Hindi, all of which are based in Delhi NCR.

Hinduism is a religion that originated in India The Hindu group, which has its headquarters in Chennai and Tamil Nadu, owns this English-language daily newspaper. In 1878, the journal began as a weekly and in 1889, it became a daily. After the Times of India, it is India’s second most widely circulated English language daily. According to reports, The Hindu was published in 21 sites throughout 11 Indian states as of 2018.

Which is the no 1 selling newspaper in India?

Dainik Bhaskar is the no 1 selling newspaper in India.

Which is the best selling newspaper in India?

The Hindu is the best selling Newspaper In India.

Which is the best selling English newspaper in India?

The Hindustan Times is the best selling English Newspaper In India.

What is the biggest selling newspaper in the world?

The Times Of India is the biggest selling newspaper in the world.

Which is India’s most read newspaper 2021?