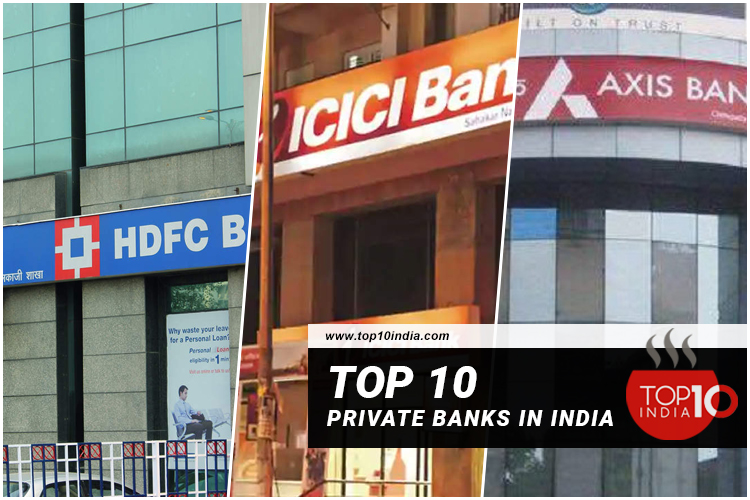 Top 10 Private Banks In India: HDFC Bank is the number 1 private bank in India who is also the best and largest of all banks in the country. Banks play a very important role in the economy of the country. The bank is something that acts as a bridge between the savers and the investors. The bank takes the money from the investors who have a surplus amount of funds and lends it to the one who needs money in form of loans. The government and private sector both have come together to render various financial assistance to the population.

If we compare the private and the public sector banks, the major difference comes with the number of formalities and quickness in service as the private banks are capable enough to resolve our queries at the earliest and with speedy service and fewer formalities in comparison with the government banks. Here is our list of the top 10 private banks in India.

HDFC Bank is one of the best and largest private banks in India considering the Total sales during the Year. It was amid the first to obtain ‘in principle’ permission from the Reserve Bank of India (RBI) to establish a bank in the private sector. The estimated revenue of the bank is Rs. 105,161 crores. The bank has 98,061 employees. The Interest Margin of the bank is 4.3%. The bank has 13,160 ATMs and was 5,103 branches.

ICICI Bank is a pre-eminent Private Bank in India. ICICI Bank was developed in 1994 by ICICI Limited, an Indian financial business, and was its fully-owned subsidiary. The revenue of the bank is estimated to be RS. 84,353 crores. The No interest Margin of the bank is 3.61%.

Axis Bank is positioned at the third position while listing the best Private Banks in India. The Bank provides the complete spectrum of commercial assistance to client sections including Large and Mid-Corporates, MSME, Agriculture, and Retail ventures. The Bank has a huge footprint of 4,050 domestic branches. The bank has 11,801 ATMs & 4,917 money recyclers expanded across the country as of 31st March 2019.

In February of the year 2003, Kotak Mahindra Finance Ltd. (KMFL), the Group’s collier company, obtained a banking license from the respected Reserve Bank of India (RBI), growing as the first non-banking finance company in India to turn into a bank – Kotak Mahindra Bank Ltd. Kotak is one of the best Private Banks in India. It is amongst the best 5 private banks in India.

IndusInd Bank has seized the 39th rank in The Economic Times and Interbrand Best Indian Brands Study in the year 2014. On this list, this bank is in the fifth position. The revenue of the bank is nearly RS. 24,154 crores. The No interest Margin of the bank is 4.05%. The bank owns 1938 branches and has 2605 ATMs. The bank is having more than 9 million users.

YES BANK, India’s sixth most popular private sector bank is a prime-quality, customer-focused, and service-driven Bank. Since its origin in the year 2004, YES BANK has developed into a ‘Full-Service Commercial Bank’ rendering a comprehensive range of products, services, and technology-driven digital aids, provisioning to corporate, MSME & retail customers. The estimated revenue of the bank is Rs. 20,269 crores.

The Bank provides its customers, numerous banking services such as Internet banking, Mobile banking, online bill payment, online fee collection, depository services, Cash Management Services, merchant banking services, insurance, mutual fund products. The bank is very reputed in the country. It was amidst the first banks in India to digitalize all its branches and amid the best private bank in India.

IDFC Limited was established in 1997 to support infrastructure concentrating mainly on project investment and mobilization of funds for private sector infrastructure improvement. Dr. Rajiv Lall entered the company in the year 2005 and favorably developed the business to Asset Management, Institutional Broking, and Infrastructure Debt Fund. The revenue of the bank is estimated to be Rs 9,098 Cr. The No Interest Margin of the bank is 3.15%. The bank has constructed a solid framework including effective IT abilities and infrastructure for balancing up the banking operations.

One of the oldest banks in South India, “South Indian Bank” came into presence during the Swadeshi movement. It is in the top 10 private banks in India in 2020. The development of the bank was the accomplishment of the dreams of a group of ambitious men who came together at Thrissur, a primary town (now called the Cultural Capital of Kerala). In the recent State of Cochin to present the people- a safe, effective, and service-oriented treasury of savings on one hand and to free the business population from the holds of selfish money lenders on the other by rendering need-based credit at moderate rates of interest is the main importance of this bank.

Bandhan Bank is a subordinate of Bandhan Financial Holdings Limited (BFHL). BFHL is a fully-owned subsidiary of Bandhan Financial Services Limited (BFSL). Bandhan Bank is centered on assisting the unbanked and underbanked communities of India. The revenue of the bank is estimated to be Rs. 7,208 crores. The No interest Margin of the bank is 10.45%. The bank owns 481 ATMs and has 999 branches spread over the country.

Which is the no 1 private bank in India?

HDFC is the number 1 private bank in India.

Which private bank is best in India?

ICICI is the best private bank in India.

Which is the best bank in India?

Axis Bank is the best bank in India in terms of service.