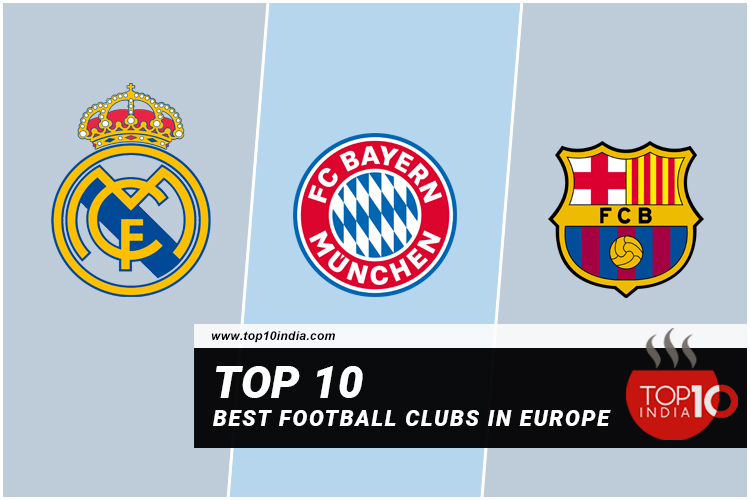 The 10 Best Football Clubs in Europe

In this list, we have mentioned The 10 Best Football Clubs in Europe. You probably have a  rough idea of the top three or five greatest European Clubs ever, but you have wondered about the 10 best clubs. You might wonder why La Liga, Premier League, Series A, Bundesliga have a 2.5 advantage over all other European leagues. The four leagues are the only leagues to have been statistically ranked the best league by UEFA.

Real Madrid is probably the biggest name in club football and is the prime draw for superstars worldwide. The latest ranking from the Deloitte Football Money League shows that Madrid is the most profitable enterprise globally, generating nearly €519 million of revenue during the 2012/13 season. In addition, it is the most successful club in European history with a record-breaking 11 champions league. It is in the top Position In the List of The 10 Best Football Clubs in Europe.

FC Bayern Munich is a German professional sports club based in Munich, Bavaria. It is best known for its professional football team. It also has got a good name and history in the name of the football clubs. It has marked itself in the name of European as well as German Football. It has won a record of 31 national titles, including nine consecutively since 2013 and 20 national cups, along with numerous European Honours.

Futbol Club Barcelona, commonly referred to as Barcelona and commonly known as Barca, is a Spanish professional football club based in Barcelona. In recent years it has become so good, powerful, and dominating that no one can doubt it. It has won 4 UEFA in the last 12 years, and that is impressive also. It is domestic also.

Manchester United Football Club is a professional football club based in Old Trafford, Greater Manchester, England, that competes in the Premier League, the top flight of English football. Sir Alex Ferguson is the name behind its success in becoming one of the world’s best clubs. Manchester United has won more trophies than any other club in English football, with 20 League Titles, 12 FA Cups, Five League Cups, and a record of 21 FA Community Shields.

Juventus  Football Club is a professional football club based in Turin, Piedmont, Italy. ‘The Old Lady’ or Juventus have recently had a logo change and have left fans furious. Many fans feel they had lost their history and what a history it was. Full of controversy and success. Juventus comes on the list of Top 10 football clubs due to its sheer determination.

Ac Milan is a professional football club in Milan, Italy. Milan is also currently in a major slump, as they, along with many other Italian sides, look to adapt to the new football environment. AC Milan’s 18 FIFA and UEFA trophies are the fourth highest out of any club and the most out of any Italian club. Milan is the third most successful club in series A behind local rivals Inter Milan and Juventus. They also have won the Coppa Italia five times and the Supercoppa Italiana seven.

FC Porto is a Portuguese professional sports club based in Porto. It is best known for the professional football team playing in the Premier Liga, the top flight of Portuguese football. Porto is one of the ‘Big Three’ teams in Portugal.  Porto is the second most decorated team in Portugal with 79 major trophies. Porto is the only Portuguese club to have won the UEFA cup/ European League, the UEFA Super Cup, and the intercontinental cup.

Benfica FC is a professional football club based in Lisbon, Portugal that competes in the Premier Liga, the top flight of Portuguese football. Benfica is honored with the Portuguese Orders of Christ, of Prince Henry, and of merit. Benfica is the most decorated club in Portugal. Benfica has the second-most participation in the European Cup/UEFA Champions League.

AFC Ajax is a Dutch professional football club based in Amsterdam that plays in the Eredivisie, the top tier in Dutch football. Ajax has been the most successful club in the Netherlands, with 35 Eredivisie titles and 20 KNVB Cups. However, although Ajax continues to produce top-quality players and adheres admirably to philosophy, they don’t have the competitive clout to be considered true giants of the game anymore.

1.Which is the No.1 European Football club?

Real Madrid is the NO.1 European Football club.

2.What is the best football club in Europe With all your qualities?

Manchester FC is the best club in Europe.

3.Which is the oldest football club in Europe?

Savages FC is the oldest football club in Europe.