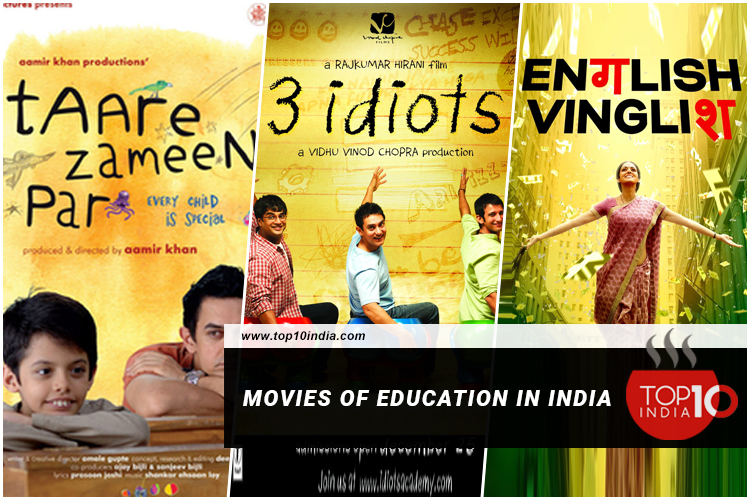 Movies of Education in India: Bollywood is the most popular and well-known industry in India. Movies are probably one of the most efficient ways to get across a message. Bollywood rarely explores films on the education system; however, some movies have openly challenged the Indian education system, talking about its flaws and loopholes.

Movies of Education in India

Teachers play an essential role in everyone’s life. They teach us in schools, but we also learn many useful things like moral values, social etiquette’s, how to treat others & be friendly with our classmates. It is granted that technology has opened the door of new learning & has also changed the course of education. But a good teacher has the power to change our life, ignite us most perfectly. A teacher is not only the person who teaches the syllabus to students. Beyond that, teachers serve many other roles in the classroom. They set the tone of the school, mentor & teach children & nurture them well. That’s why the role of the teacher as a moral guide is critical in one’s life.

National award-winning film Taare Zameen Par is the first film to mind when talking about movies that challenge the traditional education system. Starring Amir Khan and Darsheel Safari, this film depicts the journey of a young boy, Ishaan, whose parents fearing his poor academic performance, send him away to boarding school. Art teacher Ram Shanjr Nikumbh suspects that the boy is, in fact, dyslexic. Under the teacher’s guidance, Ishaan can thrive in his own way. This movie shares a message that every child is different and learns differently and that there is no reason for anyone to put a child down based on his academic performance. Apart from this, the movie also raised awareness on dyslexia and brought in a different perspective to this learning disability which even to CV this day is looked down upon in the education industry.

Challenging the biggest Indian stereotype of education, one that puts the profession of engineering on a pedestal, 3 idiots talk about the importance of free-thinking, creativity, and the most important choice. In India, children have often been forced into these traditional career paths out of no interest of their own, ones that parents choose. This movie highlights the typical lives of many Indian engineering students. The message of this movie is to work hard, follow your passion, and go after your dreams rather than success. It talks about how you will succeed at the end of the day if you do what you love.

Her family constantly mocks housewife and caterer Shashi for not knowing English. A quiet and submissive woman, Shashi finally decides to take matters into her own hands and begins to build her self-confidence by taking English lessons. This movie can be credited for throwing light on issues of social exclusion that many Indians, especially women, face due to their inability to speak English. Women were never given proper education, and this movie shows the apparent consequences of it. This movie sends a message that for learning, there is no age.

When translated, Nil Battey Sannata means ‘zero divided by zero equals nothing,’ which is slang for ‘good for nothing. This movie talks about the importance of education in our lives and how many of us take it for granted. Chanda, a school dropout, housemaid, and single mother, enrolls herself in her daughter’s school in the same class as her. This film focuses on the importance of dreams and how education can change lives regardless of social status. Additionally, this shows the Indian education system as it is, without any sugar-coating, and emphasizes how a parent’s limitation shouldn’t stop a child from achieving anything.

This film directly challenged the Indian education system, one that is believed to cause pressure on students that often leads to major psychological disorders. This movie deals with student suicide, a topic which unfortunately is still a major issue in India. The movie depicts how school-going children are being forced into doing things they aren’t good at or are interested in, for example, a young artist who has no time to paint because he has to focus on math and physics. This movie stresses the fact that education exists for one to grow and not to kill them.

No.6 Chalk and Duster

Vidya is one of the senior staff members at this fair to a middling educational institution, which has thus far functioned smoothly under the able hands of Principal Indu Shastry (Zarina Wahab). Everything changes with the appointment of the new principal. The teachers face unpleasant surprises when the popular and considerate Indu is replaced by the ambitious and cut-throat Kamini, who aspires to upscale this middle-class school. Teachers’ chairs are removed from the classrooms, the tea is no longer free, and subjects are juggled so that, for example, the overweight Hindi teacher is now assigned physical training spoiling the whole dynamics of the school.

The story begins with a new English teacher Rahul Udyavar (Shahid Kapoor), joining Saraswati Vidya Mandir school in the Mirpurkhas suburbs. He strikes instant rapport with students and teachers alike. When Rahul Udyavar unifies the teachers (Ayesha Takia and Sushant Singh) against the atrocities of the school’s management, Principal Aditya Sahay (Nana Patekar) defends the management’s decision. This comes as a shocker to the teachers as Sahay is known for his dedication as an educator for the last 32 years who has built the school’s high reputation.

Raj Batra (Irrfan Khan) is a boutique owner who lives in Chandni Chowk with his wife, Meeta Batra (Saba Qamar), and her 5-year-old daughter, Piaa Batra (Dishita Sehgal). The couple wants Piaa to be admitted to a prestigious English-medium school in Delhi. They feel that this will enable her to become a part of the elite of society. They decide on Delhi Grammar School, ranked the best in the city, but it requires that students stay within a 3-km radius. They move to a posh villa in Delhi’s upscale Vasant Vihar neighborhood and try to become more refined in their manner. A consultant, Saumya (Tillotama Shome), tutors them in the answers to be given in the admission interview despite her misgivings about them. Still, their limited knowledge of English means Piaa’s application is rejected.

Iqbal is a 2005 Indian sports drama film that follows a cricket-obsessed boy from a remote Indian village. He aims to overcome his difficulties, become a cricketer, and fulfill his dream of playing for the Indian national cricket team. Iqbal seeks help from Mohit (Naseeruddin Shah), who was once a great cricketer and persuades him to be his coach. Mohit trains Iqbal and gets him a place on the Andhra Pradesh Ranji Trophy team, despite Iqbal not having any previous cricketing experience.

No.10 Do Dooni Chaar (Movies of Education in India)

Do Dooni Chaar is a 2010 Indian Hindi comedy-drama film directed by Habib Faisal and stars Rishi Kapoor, Neetu Singh, Aditi Vasudev, and Archit Krishna in the lead roles. The film is about a middle-class school teacher who tries to keep his wife and children happy in inflationary times and dreams of buying a car. In the end, it is not just the teacher who redeems himself by not succumbing to taking bribes, but also his children who begin to see him in the true light and the importance of being a teacher and an honest citizen.

FAQs (Movies of Education in India)

1.  Which is the no.1 education movie in India?

Taare Zameen Par is the no.1 education movie in India.

2. Which is the first education movie in India to win a national award?

Taare Zameen Par is the first educational movie in India to win a national award.

3. Which is the most famous education movie in terms of profit?

Hindi Medium is the most famous educational movie in terms of profit.

4. Which education movie was released worldwide?

3 Idiots is an educational movie that was released worldwide.