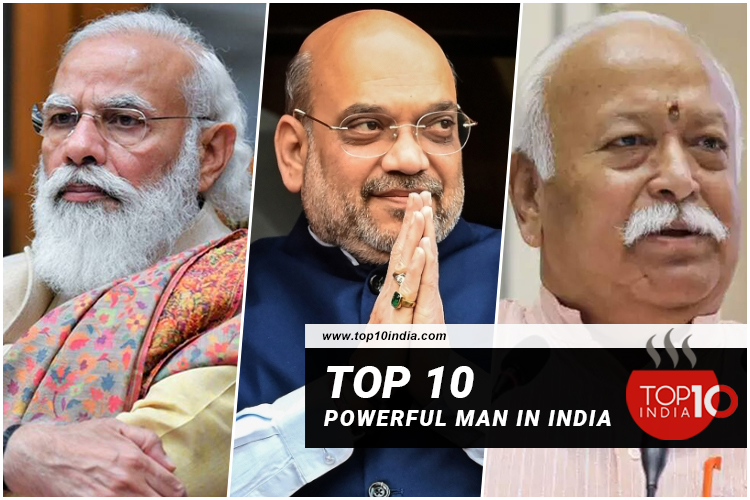 Power is a potent combination of money and influence that enables people to help shape the world. A powerful person has both money and the power to do anything. Politics is one of the most powerful professions in India. It provides many rights to the person, to change things so that they can get better. Here is the list of the Top 10 Powerful Man in India.

Narendra Modi ranks at the first position in the list of the Top 10 powerful men in India. He is considered the most powerful man in India because he is the Prime Minister of India and holds many powers. He has started many different projects in different areas to developed the country. When covid-19 spread out in India, he announced a lockdown in India, and 1.3 billion people followed his lockdown instructions. Now, he is providing covid vaccines to the whole country to save the lives of people. He pulled off a diplomatic coup over China by committing to send vaccines made in India to other 70 countries.

Amit Shah is another great politician in India. He is currently the Minister of Home Affairs. He is the de facto chief of the BJP and plays a significant role in the organization. Under him, the BJP’s ideological pot has been on a steady boil – from scrapping Article 370 in August 2019. He also pushed Amendment Act despite protests to now leading the party’s Ram Mandir drive. He also managed to get former Congress leader Jyotiraditya Scindia and almost two dozen MLAs to walk out of the Congress.

Mohan Bhagwat is the 6th Sarsanghchalak of the Rashtriya Swayamsewak Sangh. Under Bhagwat, the RSS is pushing ideological projects with greater strength. He has helped the BJP grow in strength in successive elections. He was part of the Ram temple foundation laying ceremony in August 2020, marking the RSS mark on the project. Due to a high threat perception from Islamic terrorist organizations,  the government of India ordered the Central Industry Security Force to provide him with round-the-clock protection. At Z+VVIP security cover, he is one of the most protected Indians today.

Jagat Prakash Nadda is the current president of the Bharatiya Janta Party. He has an extensive outreach program for the party during the lockdown. He also kicked off an awareness campaign on the new farm laws in Bengal. He led BJP’s campaign in Bihar and managed to win the election. He was previously the Union Munster of Health and Family Welfare. This year, he started a new scheme, ‘Ek Muthi Chaawal Yojana’ in Bardham, West Bengal.

Mukesh Ambani is an Indian billionaire businessman, the chairman, managing director, and the largest shareholder of Reliance Ltd. Reliance, India’s largest company in market capitalization and a retail business and telecom leader. In1985, he married Nita Ambani, and they have two sons- Akash Ambani and Anand Ambani, and a daughter- Isha. He and his family live in a private 27-story building in Mumbai, and it is valued at US$1 billion. His house includes three helipads, a 160-car garage, a private movie theater, a swimming pool, and a fitness center. He is the owner of the IPL team ‘Mumbai Indians’. He gifted his wife a $60 million Airbus A319 for her 44th birthday in 2007.

Rajnath Singh is the current Defence Minister in India. He is considered the soft face of the NDA government in Parliament and a previous agriculture minister in the Vajpayee Cabinet. During military standoffs with China in May 2020, his decision to cross the LAC and capture strategic heights in the Kailash Range gave India the leverage to negotiate and get Finger 4 on Pangong Tso’s north bank vacated.

Ajit Doval is the fifth and current National Security Advisor to the Prime Minister of India. He has the PM’s complete trust and is considered one of the most influential NSAs. His conversations with his Pakistan counterpart, Moeed Yusuf, in a third country. And then, communication with Pakistan Army chief General Qamar Javed Bajwa led to the pact between the two militaries to adhere to the ceasefire agreement in the last three months. He is also working closely with External Affairs Minister S Jaishankar.

Nitin Gadkari is an Indian politician and businessman. He is currently the Minister of Road Transport and Highways and the Minister of Micro, Small, and Medium Enterprises. He has won praise from both within his party and outside. Despite the pandemic, he got the highways sector back on track, ending the financial year with a record level of road construction.  He has also galvanized the MSME sector to ride on the Atmanirbhar push.

Nirmala Sitharaman is the current Minister of Finance and Corporate Affairs of India. She has been admired for producing a Budget that puts the economy on a reset mode, with a clear roadmap of the government exiting various businesses through privatization, focus on spending to put the economy on a steady growth path, and transparent budget accounting. She is a member of the Rajya Sabha, the upper house of the Indian Parliament.

Gautam Adani is a billionaire industrialist and philanthropist. He the chairman and founder of the Adani-Group, a  multinational conglomerate involved in port development and operations in India. His Ports and Special Economic Zone handles India’s largest commercial port. The Adani group has acquired a controlling stake in the Mumbai International Airport, besides six others, making it the largest airport operator in the country.