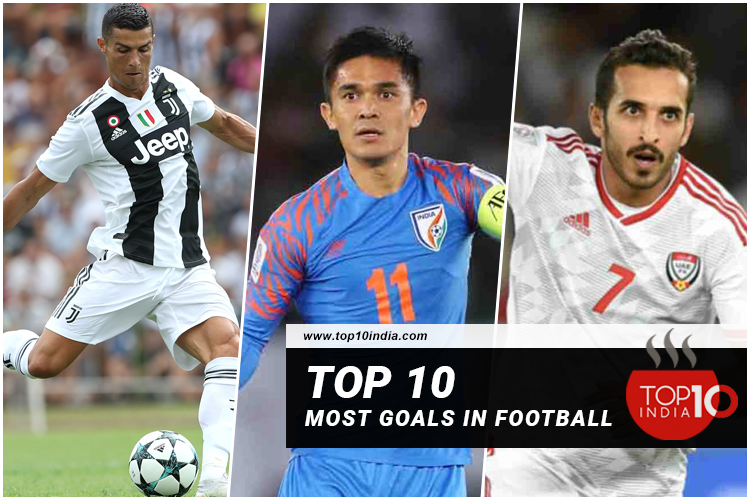 Top 10 Most Goals in Football | Footballer With Most Goals

Top 10 most goals in football:- Football is played by the team of 11 players and 7 are substitute in case of player get injured, or something happened. The Football is round in shape and is kicked by the players. The player is not supposed to pass the ball by hand. There are lots of benefits to playing football. It improves stamina, agility, flexibility, endurance, and so on.

Top 10 Most Goals in Football

Sunil Chhetri is an Indian professional footballer who plays as a striker or winger and captains both the Indian Super  League side Bengaluru FC and the Indian national football team. The captain fantastic of Indian soccer, Sunil Chhetri, is placed at the second spot in this elite list. He has netted 74 goals in 117 appearances. Chhetri achieved the feat when he struck a brace to help India defeat Bangladesh 2-0 in the ongoing FIFA World Cup Qatar 2020.

Ali Mabkhout is an Emirati professional association football player who plays for Al Jazira. Mabkhout made his debut for Al Jazira’s first team in 2009. UAE attacker Ali Mabkhout is occupying third place in this list with 73 goals  89 appearances. Mabkhout has impressed 0.82 goals per match ratio. On 10 October 2019, Mabkhout scored a hat-trick against Indonesia in a 5-0 win to become UAE’s all-time leading goalscorers.

Lionel Andres Messi is an Argentine professional footballer who plays forward and captains Spanish club Barcelona and the Argentina National team. He is often considered one of the greatest players in the world of all time. The alone player in history to possess five Ballon d’Ors. This 5’9″ is probably the finest dribblers of all time. His playmaking capacity, quality of passing, finishing, and scoring capacity. He had broken the record of top goal scorer of Ronaldo in 2021 and held the 3rd position. He is one of the greatest goalscorers of all time.

Robert Lewandowski is a Polish professional footballer who currently plays for Bayern Munich and Poland’s national team. He is popular among fans for his positioning, technique, and finishing. He is considered one of the best strikers in the world. In 2020, he received IFFHS World’s best top goalscorer awards. Lewandowski also won the Best FIFA Men’s Player Award and the UEFA Men’s Player of the Year Award. He defied his advancing year by breaking the Bundesliga goal record. It is Lewandowski’s first-ever golden shoe award, and he becomes the first Polish player to win it.

Neymar da Silva Santos Júnior known as Neymar, is a professional footballer who plays forward for the Brazil national team. Neymar is the second-highest goalscorer for his national team. In addition, he was a key player in Brazil’s victories at the 2011 South American Youth Championship. Neymar ranks among the world’s most prominent sportsmen.

Luis Alberto Suarez Diaz is a professional footballer who plays as a striker for Uruguay national team. Suarez has netted 63 goals for Uruguay in 117 games and currently occupies the seventh spot. Suarez has won twenty major trophies in his career, including seven league titles and a UEFA Champions League at club level and 2011 Copa America with Uruguay. At the international level, Suarez is Uruguay’s all-time leading goalscorer.

Zlatan Ibrahimovic is a Swedish professional footballer who plays as a striker for series A club A.C. Milan and the Sweden national team. Zlatan Ibrahimovic has scored 62 goals in international football in 118 matches. He is one of the decorated active footballers in the world, having won 31 trophies in his career. He has scored over 570 career goals, including more than 500 clubs, and has scored in each of the last four decades. Swedish newspaper ranked him the second-greatest Swedish sportsperson ever.

Romelu Lukaku is a Belgian professional footballer who plays as a striker. In the season 2020-21, he played 32 matches. They had 48 shots on target from a total of 77 shots and scored 24 goals. Romelu Lukaku averaged 21 passes per match with a pass completion rate of 73% and had 11 assists.

Edin is a Bosnian professional footballer who plays as a striker for the Series A club Roma and captains the Bosnia and Herzegovina national team. Edin Dzeko is placed at the 10th spot in this elite list with 59 goals in his bags from 114 games. In 2009-2010, he was the second-highest goalscorer with 26 goals. He was also the most attractive player with his personality, game, dribbling, Goal assists.

FAQ (Top 10 Most Goals in Football)

Sunil Chhetri has the most goals in football.

Cristiano Ronaldo is the No.1 goal scorer in the world.

Published in A to Z, Country, Personality, Social, Sociology & Society and Sports