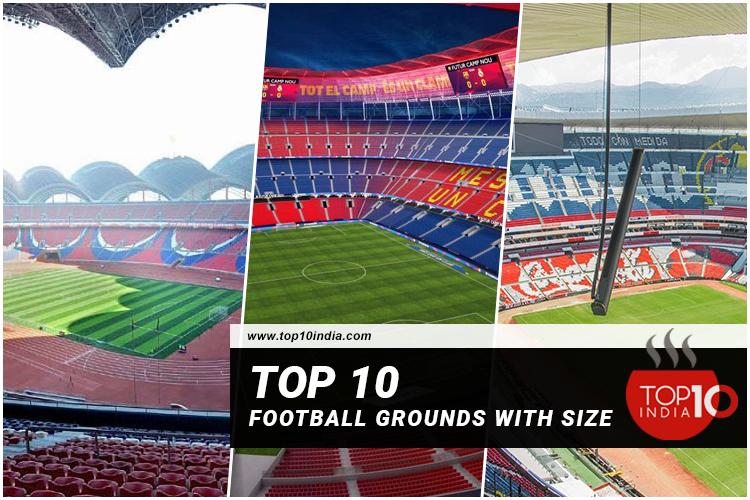 Top 10 Football Grounds With Size:- Nowadays, football is a very popular sport and we can say that it is also a very stylish sport. With the world having much love for football, the need for better biggest stadiums has always resulted in some iconic infrastructures, several of which have become the world’s best stadium. If there is no football ground in the world we can’t make memories of the football matches that have been played in the world.

In this list, we have mentioned the Top 10 football grounds with size. These grounds are very beautiful in all aspects. This article will find information about different football stadiums throughout the world but especially those in Europe. There should be the ground through which they can give better performance for their nation or club for the sportsperson. The first international match was played at the Racecourse on 5 March 1877 when Scotland visited Wales. If you are unaware of these beautiful stadiums, below are the Top 10 football grounds with size.

No.1 Rungrado 1st of May Stadium

The Rungrado 1st of May Stadium is a multi-purpose stadium occupying an area of 20.7 hectares on Rungra Island, Pyongyang, North Korea. It is the second-largest stadium in the world by seating capacity. The stadium’s scalloped roof features 16 arches arranged in a ring and resembles a magnolia blossom. The actual capacity of the venue is thought to be 114000 but that would still make it the largest in the world. Inaugurated in 1898, the stadium now hosts the annual Arirang Games, which is the largest gymnastics display in the world, according to the Guinness Book of Records. It was renovated in 2014 and reopened for use in 2015.

Camp Nou is a football stadium in Barcelona, Spain. It opened in 1957 and has been the home stadium of FC Barcelona since its completion. It is the largest stadium in Spain and Europe, and the fourth largest association football stadium in the world in capacity. Camp Nou is undergoing a major reconstruction. In fact, the stadium is so revered by fans that a referendum needed to be held in order to approve plans for the reconstruction of the stadium, set to be completed in 2022. UEFA rated Camp Nou a five-star stadium for its services and functionalities.

Estadio Azteca is a multi-purpose football stadium located in Mexico City. It is the official home of the football club Club America and the Mexico national football team. It is the largest stadium in Mexico. It is regarded as one of the most famous and iconic football stadiums in the world and was the first to host two separate FIFA World Cup finals. English fans will know the ground well as it was the location for Maradona’s famous ‘hand of God’ goal in the 1986 quarter-final between England and Argentina.

The Santiago Bernabeu is home to one of Europe’s most successful clubs. With nine European titles to their name, Real Madrid’s place in the upper echelons of world football is secure, and there could be no more fitting venue for such a club to play. It is the second-largest stadium in Spain and the third-largest home to a top-flight European club after Camp Nou and Westfalenstadion. The stadium has been home to many of the world’s greatest players over the years, with the likes of  Ferenc Puskas, Zinedine Zidane, Ronaldo, and Cristiano Ronaldo all strutting their stuff in the famous ground.

No.5 The Allianz Arena

The Allianz Arena is a football stadium in Munich, Bavaria, Germany with a 70,000 seating capacity for international matches. It is the only stadium in Europe that is able to change colors to reflect which of the two teams are playing red for Bayern and blue for 1860 Munich. There are 2,152 business seats, 106 VIP boxes of various sizes accommodating 1,368 guests, and 227 special seats for the disabled at the main entrance ground level. It is the second-largest arena in Germany behind Westfalenstadion in Dortmund.

The Maracana is one of the most notable stadiums in world football situated in one of the most beautiful cities throughout the world. The stadium hosted a 1950 decisive world cup group-stage match between Brazil and Uruguay that saw a staggering capacity of 199,854. The stadium is mainly used for football matches between the major football clubs in Rio de Janerio, including Flamengo, Fluminense, Botafogo, and Vasco da Gama. It has also hosted a number of concerts and other sporting events.

The First National Bank Stadium, better known as FNB Stadium but also soccer city or the Calabash, is the stadium that is used to host the home games of South Africa’s football matches and the country’s rugby games. FNB Stadium became the largest stadium in Africa with a capacity of 94,736. It hosted the African Cup of Nations in 1996 and 2013 and also some of the games, including the final, when South Africa hosted the FIFA World Cup in 2010.

The Rose Bowl Stadium is an American outdoor athletic stadium. The Rose Bowl is the 16th-largest stadium in the world, the 11th-largest stadium in the United States, and the 10th largest NCAA stadium. It is arguably the most important soccer ground in the United States. It hosted the final of the FIFA World Cup in 1994, the final of the FIFA Women’s World Cup in 1999, the 1984 Olympic Gold Medal Match, and numerous CONCACAF and US Soccer Federation matches. From 1972 until 1997 the capacity was 1,04,091 but now it decreased approx. 90,000.

Wembley Stadium is a football stadium in Wembley, London, which has a capacity of 90000. The current structure was built from 2002 to 2007. It is the largest stadium in the UK and the second-largest stadium in Europe. The stadium hosts major football matches including home matches of England’s national football team and the FA Cup Final.  The stadium has a circumference of 1 km and encloses 4,000,000 cubic meters inside its walls and under its roof. The stadium’s pitch combines synthetic grass with the real Wembley grass to strengthen the playing surface.

Old Trafford is a football stadium in Old Trafford, Great Manchester, England, and the home of Manchester United. It is the largest club football stadium in the United Kingdom and the eleventh-largest in Europe. It is 0.5 miles from Old Trafford Cricket ground and the adjacent tram stop. It is surrounded by four covered all-seater stands, officially known as Sir Alex Ferguson. It is mostly famous for its crowd because it provides all facilities that a spectator needs during the match.

1. Which football ground has the largest capacity?

Rungrado 1st of May Stadium has the largest capacity.

2. Who is the best stadium in the world?

Wembley Stadium is the best stadium in the world

3. Which is the smallest football ground in the world?

Dean Court ground is the smallest football ground in the world.

Published in A to Z, Country, General knowledge, News, Social and Sports