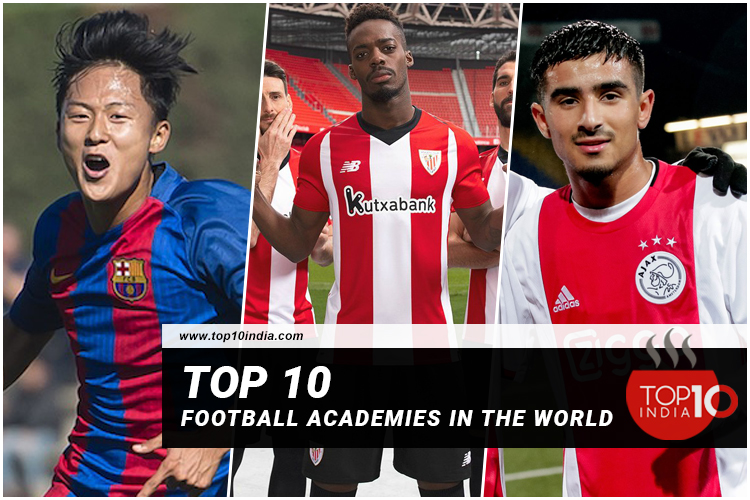 Top 10 Football Academies In The World:- All young footballers dream of making it to the big leagues one day but only the best are able to make that dream a reality. It takes devotion, hard work, and time to learn and develop the skills to become a great player. Most kids play football in the street or park but eventually need to join a youth academy to progress towards playing for a first-team. Globally, there are thousands of football academies but only a few have a world-renowned reputation.

Top 10 Football Academies In The World

La Masia de Can Planes, usually shortened to La Masia. In English, it translated to ‘The Farmhouse’ and is the term used for the FC Barcelona youth academy. The academy has more than 300 young talented and has a big influence on the success of the club. La Masia has produced numerous young players that have made it to top clubs around the world. In 2010, the three nominees for the Ballon d’Or came out of the Barcelona youth academy; Lionel Messi, Andres Iniesta, and Xavi. No other youth academy does better than one located in Barcelona and this makes La Masia the best of all football academies.

Bayern Munich Academy is the youth academy for the German football club Bayern Munich. The Youth Academy was created in 1902 and its mission is to educated young players so that it will be possible for FCB to keep a global position in club football. Notable players coming out from the Bayern Munich Youth academy include Bastain Schweinsteiger, Philipp Lahm, Toni Kroos, Thomas Muller. Bayern Munich has scouts all over the world, though most of the scouting is done within the vicinity of the city of Munich.

The sporting youth Academy occupies 5th place in terms of youth training in European football, in a study undertaken by the International Centre for Sports Studies (CIES). A total of 54 players produced at the Sporting Academy can be found across European teams, eight of which are still playing at Sporting Lisbon. The academy has produced more than 100 players who have gone to represent Portugal at the National level and also featured prominently in their later club.

Club Atletico River Plate is considered among the most successful Argentinian football clubs, the River Plate Football Academy has many scouts searching for talents on the street of Argentina. The youth academy was created in 1901 and is recognized all over the world for the number of talents that have emerged throughout it. The lower divisions of the River Plate, also known as “El Semillero” are considered to be the most fruitful of Argentina and are seen as one of the best training schools of Latin America.

The FK Partizan Youth School, also known as the Belin-Lazarevic-Nadoveza youth school, is the youth academy for Serbian football club Partizan Belgrade. The school is well known for its dedicated work with youngsters. Its training philosophy is not only the development of football players but also to care for their growth and personality forming, While also teaching sporting spirit and loyalty to the club.  Lazar Markovic and Andrija Zivkovic are probably the two biggest names to develop there recently.

There are many European top players who came out of the Anderlecht youth academy, which is located in Neerpede. An important factor in guiding the young players is the focus on working together with local schools after the father of Romelu Lukaku asked Anderlecht if they could provide his son school accommodation and football education. The most famous player to emerge from the Anderlecht youth academy includes former Man City legend Vincent Kompany and Inter striker Romelu Lukaku.

Which football Academy is best for the youth?

Santos FC football academy is best for the youth.

2. Which is the best soccer academy in the world?

AFC Ajax is the best soccer academy in the world.

3. What is the best age to join the academy?

Around 13 years is the best age to join the academy.

Published in A to Z, Country, Social, Sociology & Society and Sports