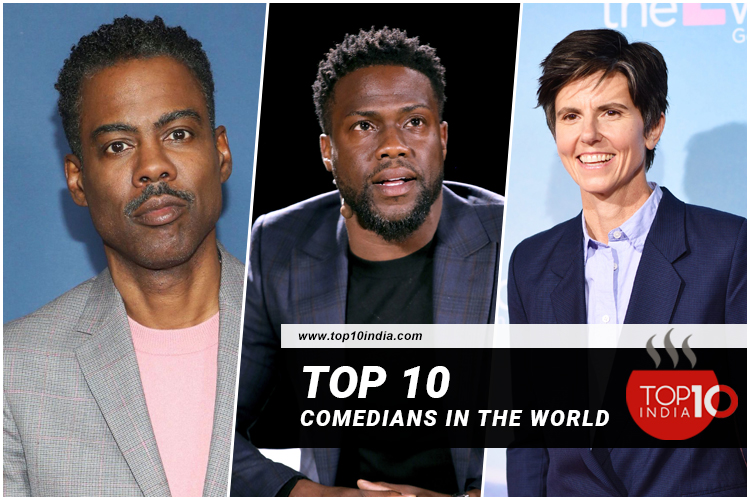 Top 10 Comedians in The World:- Laughter is a very serious business. It is perhaps the hardest job of the entertainment industry and the one that involves the most risk. Comedians perpetually remain a step below the actors, and even if they did appear in movies, it is as sidekicks, with not much scope of development. They are asked to appear in award shows, with barely 5 minutes of screen time, to make the people laugh and then disappear.

Top 10 Comedians in The World

There are some comedians who do not need to look out for opportunities to appear on television shows. They are invited there, and they have their own television shows too, which the audience waits for eagerly. Their TRPs are high and their content is strong, so they build a loyal audience. Some comedians are doing well enough to have their own tours, which may be nationwide or countrywide. Most of the time these tickets are sold out since the audience that had seen them on the internet or in movies eagerly come to see them in person.

His energy and presence on stage remain unrivaled. But what attracts the most attention from fans and viewers is how well he makes comedy out of man and woman relationships, politics, and race. Chris Rock is ever keen to highlight the struggles African Americans face living in the US. He is also quite observant of the political workings of the country. Chris has for almost three decades continues to entertain thousands upon thousands of people. Besides unveiling a whopping four comedy shows, he has ventured into TV and film. He is credited for mentoring numerous other renowned comedians including Kevin Hart and Aziz Ansari.

Kevin hart can practically joke about anything. He can turn even the saddest stories into the funniest. In the last ten years, Kevin Hart has advanced from the small local bar open mic stages to selling out arenas at the grand stages throughout America and now on to starring in movies like getting Hard, Jumanji, and Ride Along. He also offers awards and hosts at the BET Awards and the MTV Music Awards. While his presence in the box office world continues to expand, Kevin Hart has never once left behind his love for the stage. It’s no wonder he comes as an easy first as a top comedian in the world.

It was in 2012 when the world came to know who Tig Notaro was. This despite having started performing much earlier on during the early 2000s. She came out on one of her shows as having been diagnosed with breast cancer and poured her heart out about other challenges she was battling. A move that saw other world-famous comedians all over the world laud her for her bravery and comic gift. She has since beaten cancer and continued to feature on TV comedy shows. Tig Notaro continues to break boundaries by unveiling her own documentaries on Netflix and even enlisting one of the most-watched comedy specials on Amazon.

Bill Burr’s way of voicing his frustrations in such a humorous way is what ha people floored, unable to catch their breath every time he hits the stage. He never holds back anything that comes to his mind and tends to be quite blunt. His comedy circles around issues having to do with religion, feminism, and gender equality. Some of Bill’s words regarding a touchy subject such as religion have once or twice seen him bashed and called out for being inappropriate and insensitive. But what’s some good comedy without offending a few people? Away from his rants on stage, Bill has a weekly podcast dubbed ‘Bill Burr’s Monday Morning Podcast.’

You don’t even have to turn to see if it’s really him on the stage, his voice is enough confirmation. Dave Chappelle took America and the world by storm when he broke out as a comedian in the mid-2000s. He is better known for his show, the ‘Chappelle’s show,’ which steered him to the celebrity comedian level. He admits to having been a keen follower and fan of Richard Pryor from whom he draws inspiration. He makes comic relief out of topics such as American culture, race, and sexuality. He took a break from comedy for a couple of years but made a grand comeback in 2013 much to the amazement of thousands. Suddenly, it was like he never left.

If you love hearing jokes about food and parenting, then Jim Gaffigan is your guy. He started as a low-key stand-up comedian gracing different stages as early as the late 80s. But it all changed in 1999 when he made an appearance on The Late Show working beside David Letterman, who was at that time a revered comedian. Jim’s observational nature is what easily distinguishes him and his comedy from other people’s. His unbeatable prowess is what has seen him nominated two times for a Grammy award for the best comedy album.

Jerry Seinfeld must be the oldest standing comedian on this list. With a sitcom on his back and an untamed ability to make light of anything surrounding life, he continues to grace different stages and screens everywhere. Even as people throng arenas just to watch him perform on stage, he still has time to do other things. Jerry is not shy to mingle with other comedians. In fact, he is famous for having random interviews with some of the most famous comedians in one of his shows called ‘Comedians in Cars Getting Coffee.’

No.8 Mike Birbiglia (Top 10 Comedians in The World )

No one can tell a funny story, quite like Mike Birbiglia can. He blends what many speculate to be real stories with humor so well you can’t help but believe everything he says. You’ll never want to miss the ending of every story because it’s where the punch that will leave you rolling on the ground with laughter is. He makes comedy out of his own life and personal experiences. He’s also ever quick to talk about his relationships. In 2013 he released a comedy special on Netflix dubbed My Girlfriend’s boyfriend. He has since established a stable career as an actor and producer in numerous other shows.

Louis’s rise to the top must have been the fastest. He shot up to celebrity comedian status almost as soon as he came out as one. He loves to talk about topics that make you want to reflect and re-think your life, the good and the bad. He says what everyone is thinking but is too afraid to tell and makes us laugh about it. Louis C.K now directs, acts, writes, and edits his own ‘Louie’ show, which is a fan favorite on TV. He is one of the highest-paid comedians in the industry.

Not that many female comedians can venture into comedy and stick around for the long haul. But not Amy Schumer. Having built a stable career as a comic, she easily takes home the title of the ‘funniest comedian.’ She so effortlessly talks about relationships vividly showcasing the woman’s side of the story. Besides comedy, she’s also an established movie star and also hosts her own show titled ‘Amy Schumer.’

1 . Who is the most famous comedian in World?

Chris Rock is the most famous comedian in World.

Kevin Hart is the no.1 comedian in World.

3.Who is the richest comedian in World?

Kevin Hart is the richest comedian in World.

4.Who is the most senior comedian?

Jerry Seinfeld is the most senior comedian.

Published in A to Z, Entertainment, General knowledge, News, Others, Personality, Social and Sociology & Society