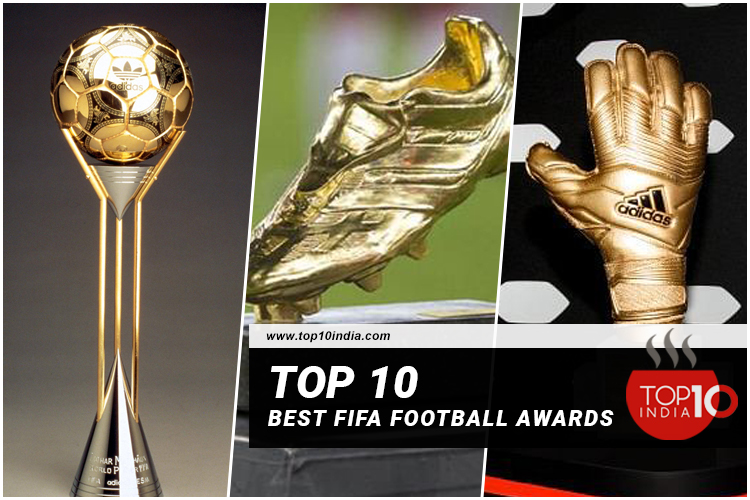 In this list, we have mentioned the Top 10 Best FIFA football awards. This list was prepared according to the research and studies. If you don’t know about these FIFA football awards you will get some idea after reading this content, you will really enjoy the article. You will know about why these awards are given?, what is its real cost? and what is the procedure to select the players or team to give these awards?.

The Golden Ball Awards is presented to the best player at each FIFA World Cup finals, with a shortlist drawn up by the FIFA Technical Committee and the winner voted for by representatives of the media. Those who finish as runners-up in the vote receive the Silver ball and Bronze ball awards as the second third most outstanding players in the tournament respectively. The Golden Ball Awards was introduced in the 1982 FIFA World Cup, sponsored by Adidas and France Football. It comes in the first position on the list of Top 10 Best FIFA football awards.

The Golden Boot or Golden Shoe Awards goes to the top goalscorer of the FIFA World Cup. While every World Cup has a ranking of the goalscorers under the name Golden Shoe. It was rechristened Golden Boot in 2010. FIFA sometimes lists the Top goalscorer of previous Cups among the Golden Boot winner. If there is more than one player with the same number of goals, since 1994 the tie-breaker goes to the player with fewer goals scored in penalties then the next tie-breaker goes to the person with more assists. If there is still more than one player, the tiebreaker since 2006 goes to the player who has played the least amount of time, which translates to a higher goal average.

The Golden Glove Award is awarded to the best goalkeeper of the tournament. The award was introduced with the name Lev Yashin Award in 1994, in honor of the late Soviet goalkeeper. It was rechristened Golden Gloves in 2010. The FIFA Technical Study Group recognizes the top goalkeeper of the tournament based on the player’s performance throughout the final competition. Although goalkeepers have this specific award for their position, they are still eligible for the Golden Ball as well, as when Oliver Kahn was awarded in 2002. In the event of a tie, the Golden Glove Award goes to the goalkeeper who progressed furthest in the competition. The next tiebreaker are saves made, then minutes played.

The best young player award was awarded for the first time at the 2006 World Cup in Germany and given to Germany’s Lukas Podolski. The award is given to the best player in the tournament who is at most 21 years old. For the 2018 World cup, this meant that the player had to have been born on or after 1 January 1997. FIFA organized a survey on the internet for users to choose the “best young player” of the world cup, between 1958 and 2002, named the best young player of each tournament.

The FIFA Fair Play Trophy is given to the team with the best record of fair play during the World Cup final tournament since 1970. Only teams that qualified for the second round are considered. The winners of these awards earn the FIFA Fair play trophy, a diploma, a fair play medal for each player and official, and $50,000 worth of football equipment to be used for youth development. Ever since 1994, it is simply a trophy with an elegant footballer figure.

No.6 Man of the Match Awards

The Man of the Match Awards picks the outstanding player in every game of the tournament since 2002. While the inaugural two editions were chosen by the technical groups, the man of the match is since 2010 picked by an online app poll on FIFA’s website. Those players will get upgraded ratings for their World Cup FUT items. If a player already has got a Man of the matching upgrade, the ratings will change automatically.

No.7 FIFA World Player of the Year

The FIFA World Player of the year was an association award presented annually by the sports governing body, FIFA between 1991 and 2015. Coaching and captains of international teams and media representatives selected the player they deem to have performed the best in the previous calendar year. The first person to win this award is Lothar Matthaus of Inter Milan. This was also given to the women football player named FIFA World Player of the year.

The FIFA Presidential Awards was a FIFA association football award given annually at the FIFA World Player Gala. It was awarded by the president of FIFA Sepp Blatter in 2001 and has not been awarded since 2014 due to Blatter’s suspension from all football activities in 2015. The FIFA President’s award recognizes outstanding achievements, professional excellence, and exemplary personal qualities. The players who have advanced the game’s development and success.

No.9 Goal of the tournament

The goal of the tournament awards was decided by online voting. A total of 15 goals were on the shortlist as selected by FIFA. com. In July 2014, FIFA announced that after more than four million votes, Colombian player James Rodriguez’s first goal against Uruguay was named as the goal of the tournament. People decide the best goal that was done by perfection and was adorable then vote for that player who had done the goal.

No.10 FIFA Order of Merit

The FIFA Order of Merit is the highest honor awarded by FIFA. The award is presented at the annual FIFA Congress. It is normally awarded to the people who are considered to have made a significant contribution to association football. At FIFA’s centennial congress they made one award for every decade of their existence. These awards were also handed out to fans, organizations, clubs, and one to African Football. These were referred to as the FIFA Centennial Order of Merit.

Who won the most FIFA Golden Ball?

2.Which award is given to the most goalscorer?

Golden Boot awards are given to the most goalscorer.

3.Which award is given to the best goalkeeper?

Golden Gloves is given to the best goalkeeper.

Published in A to Z, Brands, Country, News and Sports