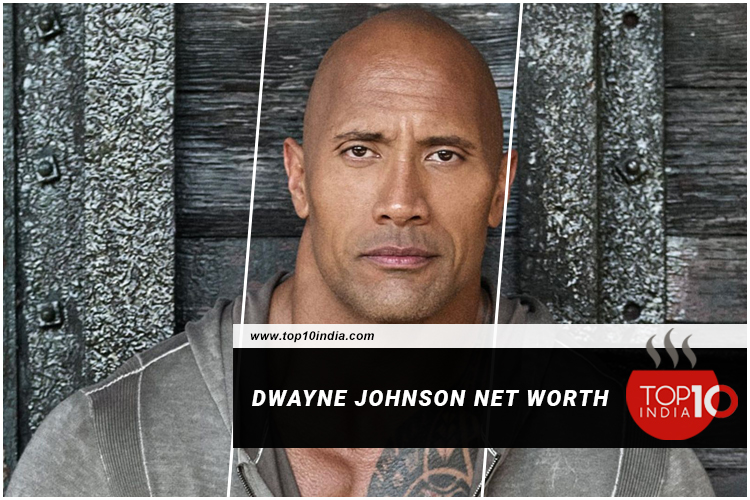 Dwayne Johnson has an estimated net worth of around a staggering $330 million. Regarded as one of the greatest professional wrestlers of all time, he wrestled for the World Wrestling Federation (WWF, now WWE) for eight years before pursuing an acting career. His films have grossed over $3.5 billion in North America and over $10.5 billion worldwide, making him one of the world’s highest-grossing and highest-paid actors.

Dwayne ‘the Rock’ Johnson, topped the list of highest-paid actors, he earned $89.4 million between June 1, 2018, and June 1, 2019. He collects 15% of the pool from his mega-franchise movies, like Jumanji: Welcome to the Jungle, which collected $962.1 million worldwide. He was also paid $20 million for his role in Fast and Furious: Hobbs and Shaw. The Rock is also paid $700,000 per episode for his appearance on HBO’s Ballers. He also earns around Seven Figures in royalties for his line of Clothing, his shoe line, and the headphones deal with Under Armour. He will also collect an upfront salary of $23.5 million, his highest ever, for the upcoming movie Jumanji: The Next Level.

Johnson As A Professional Footballer

Johnson was a college football player at the University of Miami, with whom he won a national championship in 1991. He aspired to have a professional career in football and entered the 1995 NFL Draft, but went undrafted. He signed with the Calgary Stampeders of the Canadian Football League (CFL) but was cut from the team in his first season. Shortly after, he began training as a professional wrestler.

An honorary member of the Anoa’i family, and the son of wrestler Rocky Johnson and grandson of Peter Maivia, Johnson secured a contract with the WWF in 1996. He rose to prominence after developing the gimmick of a charismatic, boastful, trash-talker. He won his first WWF Championship in 1998, becoming the promotion’s first world champion of African-American descent. Johnson helped usher in the Attitude Era, an industry boom period in the late 1990s and early 2000s. In 2004, he left the WWE to pursue an acting career. He returned in 2011 as a part-time performer until 2013 and made sporadic appearances until retiring in 2019. Johnson headlined the most-bought professional wrestling pay-per-view (WrestleMania XXVIII) and was featured among the most-watched episodes of WWE’s two flagship television shows (Raw and SmackDown). He is a 10-time world champion, a two-time Intercontinental Champion, a five-time Tag Team Champion, the 2000 Royal Rumble winner, and WWE’s sixth Triple Crown champion.

Johnson’s first leading film role was as the titular character in The Scorpion King (2002), having previously briefly portrayed the character in The Mummy Returns (2001). He has since starred in many successful films, including The Game Plan (2007), Tooth Fairy (2010), Journey 2: The Mysterious Island (2012), G.I. Joe: Retaliation (2013), Hercules (2014), San Andreas (2015), Central Intelligence (2016), Moana (2016), Rampage and Skyscraper (both 2018). His role as Luke Hobbs in the Fast & Furious films, beginning with Fast Five (2011), helped it become one of the highest-grossing film franchises. Johnson also stars in the Jumanji films, appearing in Jumanji: Welcome to the Jungle (2017) and Jumanji: The Next Level (2019). Johnson produced and starred in the HBO series Ballers (2015–2019), which ran for five seasons and was ranked as HBO’s most-watched comedy in six years. He also stars and produces the autobiographical series Young Rock (2021). In 2000, Johnson released the autobiography The Rock Says, a New York Times bestseller. In 2012, he founded the entertainment production company Seven Bucks Productions. In 2016 and 2019, Johnson made the Time 100 Most Influential People in the World list. He is the co-owner of the American football league, the XFL.

As of 2021, Dwayne Johnson Net Worth Amounts to $400 million & it will keep on Increasing shortly. Dwayne Johnson has earned a major part of his earnings from his acting career. He is currently semi-retired as far as the wrestling front is concerned, and focuses a great deal on his career in Hollywood. Dwayne Johnson is a professional wrestler and actor and one of the biggest names in Hollywood. He was one of the most successful actors in the calendar year 2018 when he earned a whopping sum of $124 million. Dwayne Johnson’s net worth amounts to $400 million and it just keeps on growing. Being born on May 2nd, 1972, at the age of just 47, Dwayne ‘The Rock’ Johnson’s net worth screams of his talents and achievements. Dwayne Johnson began his career as a professional wrestler in the WWE. Before starting in WWE in 1996 following the footsteps of his father Rocky Johnson, he was actually a college football player and aspired to play in the NFL. The Rock first shot at the acting career was when he appeared on the television show, ‘That 70’s Show’ as his father, Rocky Johnson, in 1999. He also made a guest appearance as himself in the movie ‘Beyond the Mat’ in the same year. Dwayne Johnson landed his first big role as the Scorpion King in the 2001 film, The. Mummy Returns and the rest is history.

In 2000, Johnson published his autobiography, titled The Rock Says…, which he co-wrote with Joe Layden. It debuted at No. 1 on The New York Times Best Seller list and remained on the list for several weeks. In 2013, Johnson hosted and produced the TNT reality competition series The Hero. In 2014, he hosted another TNT reality series entitled Wake Up Call. In 2019, Johnson started hosting an NBC competition series called The Titan Games. In March 2016, Johnson partnered with American fitness apparel manufacturer Under Armour to release “Project Rock”. The first item in his partnership with Under Armour, a gym bag, sold out in a couple of days. His second item, a black T-shirt sporting his signature “Brahma bull”, sold out after being worn at WrestleMania 32. Johnson also released an alarm clock app as part of “Project Rock” which received more than one million downloads in its first week of release. Since then, they have released sneakers, headphones, and other apparel. In 2016, Johnson started his YouTube channel. His first video, The YouTube Factory, featured online personality Lilly Singh and several other internet stars. In 2019, Johnson announced he would be launching his own competitive bodybuilding show alongside his business partner and ex-wife Dany Garcia, called Athletic. It is set to rival other long-standing bodybuilding shows such as The Arnold Classic and Joe Weider’s Mr. Olympia. The show was set to debut in October 2020 in Atlanta, Georgia, but plans were disrupted by the COVID-19 pandemic.

Dwayne Johnson married his long-time girlfriend Lauren Hashian in 2019. She is a singer, songwriter, music producer, and television artist. He was earlier married to producer and professional bodybuilder Dany Garcia in 1997. They have a daughter, Simone Alexandria. They separated in 2007.