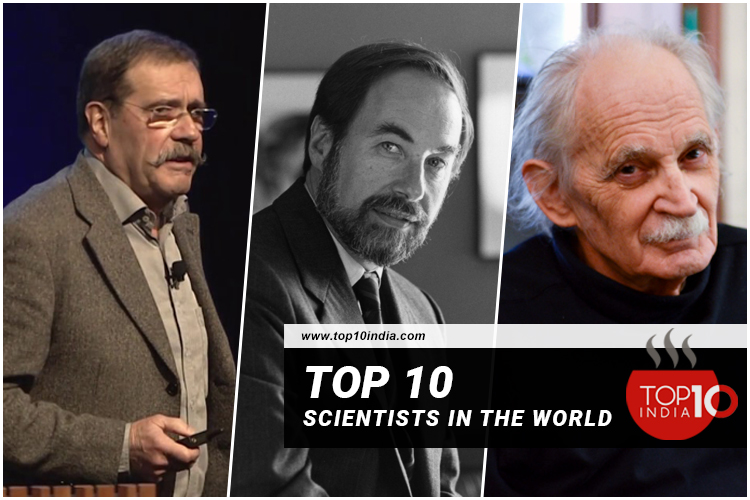 Top 10 Scientists in the World:- A scientist is a person who conducts scientific research to advance knowledge in an area of interest. As a profession, the scientist of today is widely recognized. However, there is no formal process to determine who is a scientist and who is not a scientist. Anyone can be a scientist in some sense. Some professions have legal requirements for their practice, whereas some scientists are independent scientists meaning that they practice science independently. Still, to practice science, there are no known licensure requirements.

In our current times, it may seem as we are regularly given exciting innovations and discoveries. However, many of the new ideas and technologies shaping our modern world can often be traced back centuries in their origins. Humans have the impressive ability to keep innovating and pushing onward.

Alain Aspect is a French physicist noted for his experimental work on quantum entanglement. He graduated from the Ecole Normale Superieure de Cachan and passed the aggregation in physics in 1969 with his master’s degree from Ohio University. Alain for his experiments in quantum optics and atomic physics. He was the first to exclude subluminal communication between the measurement stations in experimental demonstrations that quantum mechanics invalidates.

David Baltimore is an American biologist, university administrator, and 1975 Nobel laureate in Physiology or Medicine. He is currently President Emeritus and Distinguished Professor of Biology at the California Institute of Technology, where he served as president from 1997 to 2006. He also served as the Joint Center for Translational Medicine director, which joined Caltech and UCLA in a program to translate basic scientific discoveries into clinical realities.

Aleen Joseph bard is an American chemist. He is the Hackerman-Welch Regents Chair Professor . he is considered the father of modern for his innovative work developing the scanning electrochemical microscope, his co-discovery of electrochemiluminescence, and his key contributions to photoelectrochemistry of semiconductor electrodes, and co-authoring a seminal textbook. Allen is also the director of the Center for Electrochemistry at the University of Texas at Austin.

Sir Timothy John Berners-Lee, also known as TimBL, is an English computer scientist best known as the World Wide Web inventor. He is a Professorial Fellow of Computer Science at the University of Oxford and a professor at the Massachusetts Institute of Technology (MIT). Berners-Lee proposed an information management system on 12 March 1989, then implemented the first successful communication between a Hypertext Transfer Protocol (HTTP) client and server via the Internet.

John Tyler Bonner was an American biologist and professor in the Department of Ecology and Evolutionary Biology at Princeton University. He was a scientist in the use of cellular slime molds to understand evolution and development over a career of 40 years and was one of the world’s leading experts on cellular slime molds. His work is highly readable and generally clearly written, and his contribution has made many complicated ideas of biology accessible to a wide audience.

Dennis Bray is an active emeritus professor at the University of Cambridge. He is also part of the Oxford Centre for Integrative Systems Biology. After a first career in Neurobiology, working on cell growth and movement, Dennis Bray moved to Cambridge to develop computational models of cell signaling concerning bacterial chemotaxis.

Sydney Brenner was a South African biologist. In 2002, he shared the Nobel Prize in Physiology or Medicine with H. Robert Horvitz and Sir John E. Sulston. Brenner made significant contributions to work on the genetic code and other areas of molecular biology while working in the Medical Research Council (MRC) Laboratory of Molecular Biology in Cambridge, England.

No.8 Pierre Chambon (Top 10 Scientists in the World)

Pierre Chambon was the Institute for Genetics and Cellular and Molecular Biology founder in Strasbourg, France. He was one of the leading molecular biologists who utilized gene cloning and sequencing technology to decipher the structure of eukaryotic genes and their modes of regulation.

No.9 Simon Conway Morris (Top 10 Scientists in the World)

Simon Conway Morris is an English paleontologist, evolutionary biologist, and astrobiologist popularly known for his study of the Burgess Shale fossils and the Cambrian explosion. He has held the Chair of Evolutionary Palaeobiology in the Department of Earth Sciences, the University of Cambridge, since 1995.

No. 10 Mildred Dresselhaus (Top 10 Scientists in the World)

Mildred Dresselhaus, known as the “Queen of Carbon Science,” was an American nanotechnologist. She was an Institute Professor and Professor Emerita of physics and electrical engineering at the Massachusetts Institute of Technology. She won numerous awards, including the Presidential medal of freedom and the National Medal of Science.

Alain Aspect is the No. 1 scientist in the world.

2. Who is the richest scientist?

James Watson is the richest scientist.

3. Who is the popular nanotechnologist in the world?

Mildred Dresselhaus is the popular nanotechnologist in the world.

4. Who is the greatest scientist of the 21st century?

David Baltimore is the greatest scientist of the 21st century.

Published in A to Z, Country, Education, General knowledge, News, Others, Personality, Social and Sociology & Society