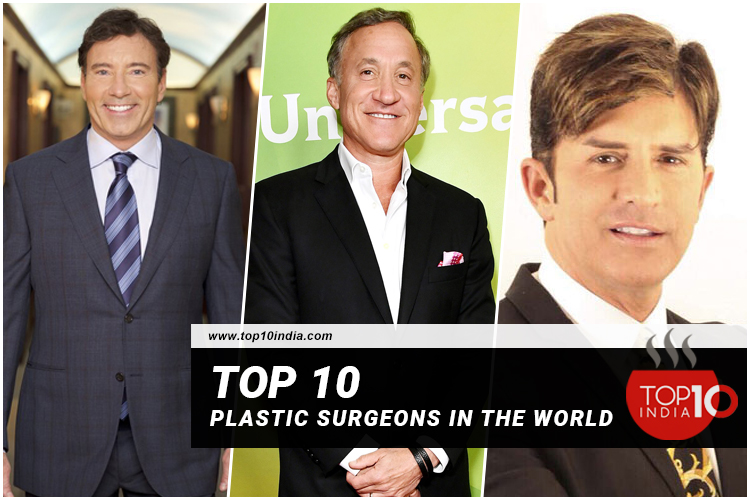 Top 10 Plastic Surgeons in the World:-The word plastic in plastic surgery means ‘reshaping, which comes from a Greek word that means ‘the art of modeling malleable flesh. The Romans also performed plastic cosmetic surgery using a simple technique such as repairing damaged ears from around 1st century BC.

Top 10 Plastic Surgeons in the World

Face surgery is a surgical specialty involving the restoration, reconstruction, or alteration of the human body. It can be divided into two main categories: reconstructive surgery and cosmetic surgery. This technique was being carried out in India by 800 BC. . Sushruta was a physician who made contributions to plastic and cataract surgery in the 6th century BC.

Garth Fisher is an American plastic surgeon best known as the first doctor selected for the ABC television show Extreme Makeover. Fisher’s clientele includes entertainers, celebrities, and business executives, and he specializes in aesthetic/cosmetic plastic surgery of the face, nose, breast, and other parts of the body. He graduated from the University of Mississippi with a BAin 1980 and an MD in 1984 and completed his and completed his internship, general surgery residency, and plastic surgery residency at the University of California.

Terry J. Dubrow an American plastic surgeon and television personality.  He also performed plastic surgery procedures on Bridalplasty. Dubrow received his medical degree from the University of California, Los Angeles School of Medicine, and holds a master’s degree from Yale University. He went on to complete a residency in general surgery. He was chief resident at Harbor-UCLA Medical Center, and he completed his fellowship in plastic and reconstructive surgery at the UCLA Medical Center. Dubrow is board certified by the American Board of Plastic Surgery.

Roberto Miguel Rey Junior is a Brazilian American plastic surgeon. He is licensed to practice medicine in the states of California and Florida. Roberto M. Rey Jr. earned a  Doctor of Medicine (MD) from Tufts University School of Medicine. Rey completed a 3-year general surgery residency at Harbor UCLA and a plastic & reconstructive surgery residency at the University of Tennessee-Memphis Health Science Center. He subsequently undertook an aesthetic and breast reconstruction fellowship at the Harvard Medical School’s Beth Israel Deaconess Medical Center in Boston.

Paul Sabin Nassif is an American plastic surgeon and television personality specializing in facial plastic surgery—specifically rhinoplasty. Nassif is a member of the American Society for Aesthetic Plastic Surgery. He completed his graduation in 1984 and completed Chicago Medical School in his first two years of medical education in 1992. Paul interned in general surgery residency at the University of New Mexico Health Sciences Center, followed by an Otolaryngology-head. Dr. Nassif subsequently completed his fellowship at St. Louis University School of Medicine in 1998.

Patrick Soon-Shiong a South African-American transplant surgeon, billionaire businessman, bioscientist, and media proprietor. He is the inventor of the drug Abraxane, which became known for its efficacy against lung, breast, and pancreatic cancer. Patrick completed his medical internship at Johannesburg’s General Hospital. He then studied at the University of British Columbia in 1979. Moreover, with research awards from the American College of Surgeons and the American Association of Academic Surgery.

Dr. Raj Kanodia is one of the leading and popular Board-Certified Surgeons specializing in Closed Rhinoplasty and Facial Rejuvenation. He is raised in Beverly Hills, Los Angeles, known as the ‘Nose King’ for his extremely skilled nose jobs that utilize a Closed, Scarless Rhinoplasty technique. Dr. Raj is trusted by many of Hollywood’s famous faces and works with different fashion models, politicians, executives, and Royalty.  In addition, it also increases your endurance and energy levels and heightens your sense of smell and taste.

No.7 Dr. Sherrell Ashton (Top 10 Plastic Surgeons in the World)

Dr. Sherrell Ashton is a Rhinoplasty specialist and a double board-certified plastic surgeon in New York City. He is also one of the world’s foremost experts in aesthetic plastic surgery. Moreover, he offers facial rejuvenation treatments like fillers, Botox, lasers, and peels for those who don’t want to have a surgical facelift. Dr. Aston has received numerous awards and is named one of America’s Top Doctors and the Best Beauty Doctor in America.

Dr. Woffles Wu is the best-known plastic surgeon in Asia. He is the only Asian surgeon to be featured in a book about the top 30 cosmetic surgeons in the world. Based in Singapore, he has an impeccable eye for beauty, balance, and harmony and has been named Asia’s Beauty Guru. He also offers other procedures like- rhinoplasty, body contouring procedures, cosmetic laser, surgery of the eyes, face, and breasts.

No. 9 Dr. Alfredo Hoyos (Top 10 Plastic Surgeons in the World)

Dr. Alfredo Hoyos is a plastic surgeon grom Columbia with the artistic ability to construct curves and sculpt muscles. He designed the Vaser High Definition Lipoplasty (VHD) procedure that introduced a mix of superficial, intermediate, and deep fat extraction combined with fat grafting.  The use of Vaser technology helps to produce high muscular definition in men and women. With his perspective of modern medicine, he has found a new relationship between art and human anatomy.

No. 10 Maria Siemionow (Top 10 Plastic Surgeons in the World)

Maria Siemionow is a polish transplant surgeon and scientist famous for performing the world’s first near face transplant on a 45 patient who was exceedingly disfigured by a close-range shotgun blast in 2004, which took 22 long hours. She earned her medical degree from Poznan Medical Academy in 1974 and completed a residency in orthopedics. Maria also earned aPh.D. in microsurgery from the same institute in 1985.

1. Who is the most famous face surgeon in the world?

Garth Fisher is the most famous face surgeon in the world.

2. Who is the famous surgeon who performed surgery for 22 hours?

Maria Siemionow is a famous surgeon who performed surgery for 22 hours.

3. Who is the only Asian surgeon featured in the Top 30 famous surgeons in the world?

Dr. Woffles Wu is the only Asian surgeon featured in the Top 30 famous surgeons in the world.

4. Who is the best facelift surgeon?