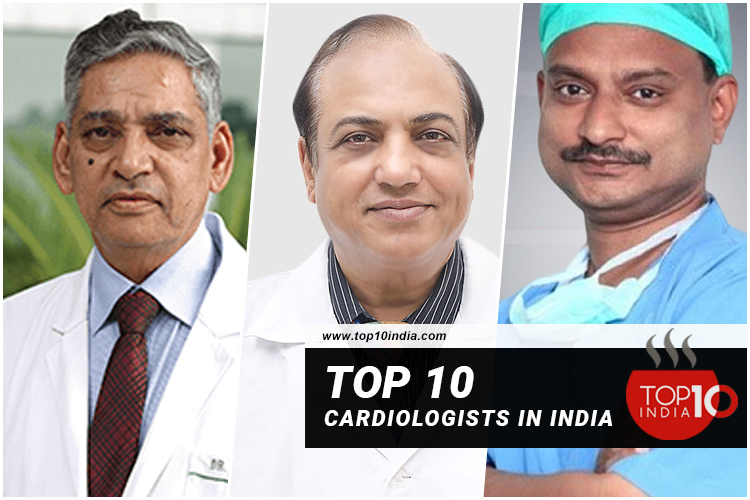 Top 10 Cardiologists In India: Dr. K.K Talwar is the number 1 cardiologist in India who works at Max Super Speciality Hospital in Saket as a chairman, as the best cardiologist in India. We all work hard to live a healthy and peaceful life, and everyone takes care of the heart, but some people work day and night and make sure that our hearts stay healthy. Yes, they are cardiologists. Cardiologists are the ones who help the people in returning them a healthy heart. They are the real assets of the country. Many of them are also awarded prestigious awards of the country like Padma Bhushan and Padma Shri.

The branch of cardiology includes medical treatment and diagnosis of congenital heart defects, coronary artery disease, heart failure, valvular heart disease, and electrophysiology. Doctors and surgeons who have proficiency in this field of medicine are called cardiologists, internal medicine experts. Various meticulous jobs like the installation of stents and pacemakers are the roles performed by the cardiologists. Here is the list of the Top 10 Cardiologists In India.

Dr. K.K. Talwar is one of the best cardiologists we have in India. He is a part of the Max Super Speciality Hospital in Saket, playing his role as the Chairman. It was Dr. K.K Talvar who introduced CRT therapy in India in the year 2000.  He has been awarded various prestigious awards, including Padma Bhushan in 2006, along with India’s Highest Civilian Award. Also, he has received awards from respected associations like ICMR and other national societies for his contributions to cardiologists.

Dr. Nandkishore Kapadia is considered one of India’s most reputed and knowledgeable cardiothoracic surgeons and is regarded among the top 10 cardiologists in India. In cardiology, he has over 30 years of experience and has successfully finished over 5500 cardiovascular surgeries. Dr. Kapadia received his MBBS and MS degrees from the reputed  MGM Medical College in Indore. Along with that, he completed his March ( Cardiovascular surgery ) at Vellore’s prestigious Christian Medical College.

Dr. Srinath Vijayasekharan is a reputed Cardiac Surgeon with over 22 years of expertise and is also regarded among the top 10 cardiologists in India. Dr. Srinath is a professional in the treatment of coronary artery disease, which means blockage of an artery, valvular insufficiency, blocked valvular stenosis, and congestive heart failure (ineffective heart muscle).

Dr. Rangasamy is an experienced Interventional Cardiologist. He is a well-known and reputed cardiologist who has experience of more than 37 years and is considered among the top 10 cardiologists in India. In his journey in the medical field, he has also conducted independent research in the areas of Atrial Fibrillation, Testosterone in Angina, and Depression after a Heart Attack. He presented his research and findings at both national and international cardiology conferences.

Dr. Vivek Jawali is a well-regarded Cardiologist who has experience of more than 40 years in cardiology. He is a specialized professional surgeon in laparoscopic surgery, cardiac ablation, cardiac catheterization, carotid angioplasty & stenting, coronary angiogram, heart valve replacement, device closure, and various other medical techniques. He has completed more than 18,000 cardiothoracic & vascular surgeries to date.

Dr. Devi Prasad Shetty is one of India’s most reputed cardiothoracic surgeons. Dr. Shetty has experience of over 35 years and has Completed over 15,200 heart procedures which included 4900 surgeries which were on children. He has completed his MBBS & MS from the prestigious Kasturba Medical College. Thereafter, he did his FRCS from the West Midlands Cardio-Thoracic Rotation Program between Walsgrave Hospital, Coventry, and East Birmingham Hospital.

Dr. Pradeep G is a well-known Cardiac Surgeon and has experience of more than 8 years of. The doctor has competence in adult valve surgeries, CABGs, aortic surgeries, pediatric procedures. He has been a part of the transplant team and actively managed patients on ECMO. Dr. Pradeep G has a publication in both International as well as national journals.

Dr. Mohan R is a well-reputed Cardiac Surgeon with experience of more than 9 years. He has proficiency in adult and pediatric cardiothoracic surgery. The doctor has a stronghold over the surgery of Myocardial infarction (heart attack), Left ventricular aneurysm (stretched heart muscle), Thoracic aortic aneurysm (stretched aorta in the chest), and much more.

Dr. Senthilkumar D is a very famous and well-reputed cardiac surgeon. He has experience for years in this field. He has proficiency in Aortic valve surgery, Arrhythmia surgery, Congenital heart surgery, Coronary artery bypass graft (CABG) surgery, and Heart transplant.

Q1. Who is the most famous cardiologist?

Dr. K.K Talwar is the most famous cardiologist.

Q2. Who is the richest cardiologist in India?

Dr. Nandkishore Kapadia is the richest cardiologist in India.

Q3. Which is the best hospital for cardiology?

Apollo is the best hospital for cardiology.

Q4. Which doctor is best for the heart?

All the above-mentioned names are the best for the heart.

Published in A to Z, Doctor, Health, News, Personality, Social and Sociology & Society