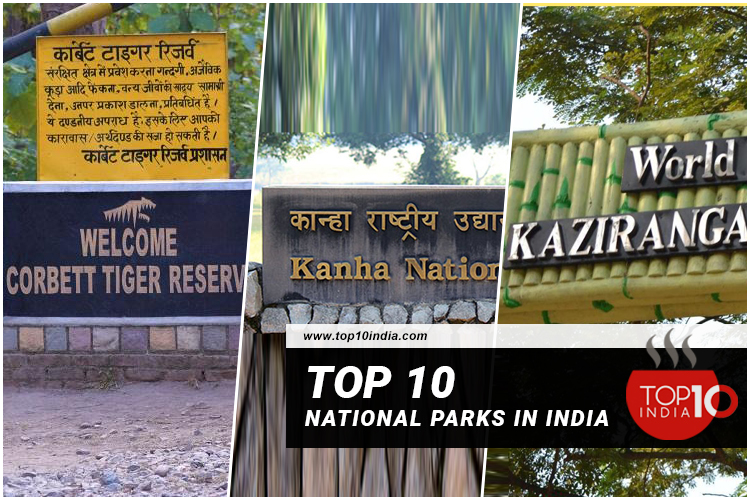 Top 10 National Parks in India:- National parks are the environment of great natural beauty, giving open-air recreation opportunities. It was established to preserve and enhance our national beauty of India and so that the enjoyment of the scenery by the public can be promoted. Below is the list of the top 10 national parks in India.

In 1970, there were only 5 national parks and 1,800 wild tigers left in India. Within two years, the Indian Government created both the Wildlife Protection Act and Project Tiger Act. Now, there are 103 national parks and 50 tiger reserves in India. They preserve and protect a wide range of biodiversity, including 70% of the world’s wild tigers, white lions, sloth bears, hundreds of bird species, and much more flora and fauna. Today, we will discuss the Top 10 National Parks in India.

Jim Corbett National Park is known as the “first national park of India” near the city of Jam Nagar. Jim Corbett national park was established in 1936 and named after a popular hunter/naturalist, “Jim Corbett.” It covers (520.8  km2) and vibrant flora and fauna, and a large part of its area are covered with grasslands. Here is a resident that you get to stay right in the middle of the forest at the Dhikala Forest Lodge is the national park’s main attraction.

Kanha National Park is known as the Kanha-Kisli National Park, is a popular tiger reserve in India. Kanha National Park is divided into two safe zones named Hallon of 250 km2 and Banjar of 300 km2. It was established as a wildlife sanctuary in 1933, National Park in 1955, and Tiger Reserve in 1974 by the Madhya Pradesh forest department. It is situated in the Mandla and Balaghat districts of MP. It covers 940 km2 that makes it the largest national park in Central India. A famous documentary by National Geographic, “Land of the Tigers,” was shot here and loved worldwide.

Kaziranga National Park is a popular one-horned rhinoceroses reserve in India. This National Park is a World Heritage site of Unesco since 1985. It was established as a reserve forest in 1905 by the Assam forest department. It is situated in the Golaghat and Nagaon districts of Assam and covers 430 km2 of Land. According to a survey of march 2018, there are 2,413 Rhinos and 385 calves. Four main rivers cross Kaziranga National Park, Brahmaputra river is one of them.

Ranthambore National Park is a national park located in Rajasthan. It is located close to the district of Sawai Madhopur and covers 1,334 km2 of land. It should always be a major choice while planning your wildlife holidays in India. There are also two other historical reasons to visit; these are Raj Bagh Ruins and Ranthambore Fort. The park also has various lakes and rivers like the Banas River in the north and the Chambal river in the South.

Sunderbans National park is a popular world heritage site of UNESCO. It is a mangrove area of the delta formed by the Ganga, Brahmaputra, and Meghna Rivers in the Bay of Bengal. It covers an area of over 4,260 km2  in West Bengal. The Sunderbans provide natural habitat to 453 faunal wildlife, including 290 birds, 120 fishes, 42 mammals, 25 reptiles, and eight amphibian species.

Last but not least, Bandipur National Park is a tiger reserve established in the year 1974 under the project tiger. It is a National Park in Karnataka state with the second-highest Tiger population in India. It is a part of the Nilgiri Biosphere Reserve with the largest protected area in South India. Most animals like deer, peacocks, bison, and elephants are spotted on the road that passes through the jungle in this park.

Published in A to Z, Animals, Destination and General knowledge