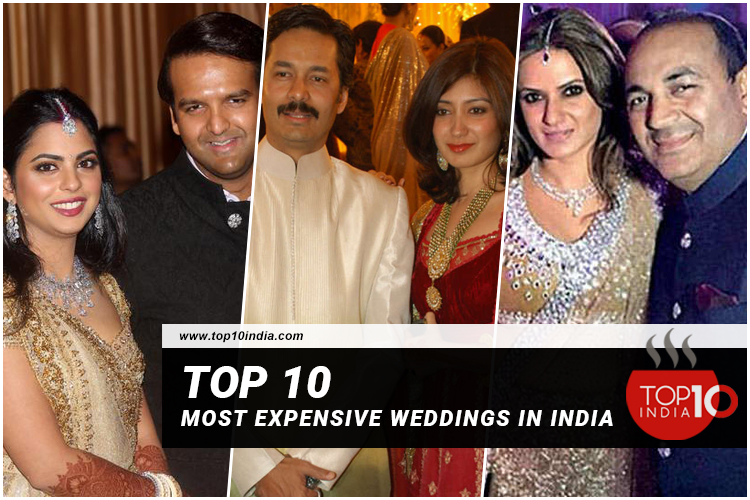 Top 10 Most Expensive Weddings in India

Top 10 Most Expensive Weddings in India: Weddings in India are not just merely a union of two souls. Typical big-fat Indian weddings are totally blown events where money flows like water and faster than people rush to the dance floor.

Top 10 Most Expensive Weddings in India

Following are the top 10 most expensive weddings in India of all time. That surely depicts the fact and shows what truly a lavish wedding in India looks like. These are the expensive Indian weddings we are talking about and none of them cost less than ₹ 100 crores.

No.1. Isha Ambani and Anand Piramal

When it’s the marriage of a daughter then there is nothing that a father can’t do. When it’s the wedding of the daughter of the richest man in India who can stop it to lavish and great. Mukesh and Neeta Ambani’s daughter Isha Ambani’s wedding with Piramal Group’s Ajay Piramal and Swati Piramal’s son Anand Piramal is undoubtedly no.1 in most expensive weddings that took place in India till now. The couple looked stunningly beautiful together and enjoyed this period of life to the fullest. This wedding was spread over 3 places and the guest list is beyond the expectation. The wedding witnessed the presence of notable people including former First Lady of the US, Hillary Clinton, and over half of Bollywood.

The entire township of Sahara was magically transformed into a fairytale land. The chairman of Sahara India Pariwar, Subrata Roy, hosted one hell of a double wedding for his sons Sushanto and Seemanto who tied the knot with Richa and Chandini respectively. The wedding was held at the Sahara auditorium and it was attended by over 11000 guests. The newlyweds were blessed by many renowned personalities. The venue was decorated with prism glasses, mashals/torch lights, wax lights, and beautiful flowers. The wedding outfits were designed by Sabyasachi Mukherjee and Rohit Bal. 110 different kinds of cuisines were served at the wedding. But the most buzzed-about thing in this wedding was they sponsored community wedding of 101 underprivileged women.

No.3. Sanjay Hinduja and Anu Mahtani

Next on the list of the top 10 most expensive weddings in India is the wedding of Sanjay Hinduja and Anu Mahtani. The UK-based billionaire tied the knot with Anu Mahtani. This couple had experienced the most celestial Indian fairytale-like wedding the nation has witnessed. The delicacies from 16 different countries were served and BMWs chauffeured the guests (16,000) around.  The couple enjoyed this 3-day extravaganza to the core and was etched deeply in everybody’s minds. J.Lo, Nicole Scherzinger, Ranveer Singh, Arjun Kapoor were some renowned names who gave special performances at the wedding. This wedding is stated as the most expensive and most exquisite one as well.

No.4. Brahmani and Rajeev Reddy

Venue buildings and areas were made to resemble Lotus Mahal, King Krishnadevaraya’s castle, the Vijaya Vittala Temple, and more. Brahmani the bride was decked out in designer clothes moving from a Neeta Lulla lehenga to a 17 crore Kanjeevaram, and diamond jewelry that cost about 70 crores. The wedding took place in the middle of demonetization, making it an even bigger event that nobody will ever forget.

No.5. Shristi Mittal and Gulraj Behl

Niece of steel tycoon Laxmi Mittal, Shristi Mittal experience a big fat Indian wedding. Shristi Mittal tied the knot with investment banker Gulraj Behl. It was a three-day extravagant affair. 500 guests attended the festivities of the wedding, only after signing a confidentiality agreement. The interesting thing is apart from the guests there were around 200 chefs and cooks were flown from India and Thailand. The wedding cake was prepared by Michelin-star chef Sergi Arola which was a six-story cake and weigh around 60kgs. A play was also written by Javid Akhtar performed at the wedding depicting the love story of the couple.

No.6. Vanisha Mittal and Amit Bhatia

You don’t have to be a genius to guess that the wedding of the daughter of steel tycoon Laxmi Mittal was a great, gorgeous, and lavish destination wedding in town even now. The functions lasted for 3-days. The ceremony was the first and last private function that took place in The Palace of Versailles. Festivities of the wedding consist of a private performance by Kylie Minogue, a fireworks display at the Eiffel Tower gardens along with A-list guests go long with various celebrities on it.

No.7. Lalit Tanwar and Yogita Jaunapuria

Lalit Tanwar and Yogita Jaunapuria’s wedding is the perfect example of what happens when the children of two politicians tie the knot. Yogita Jaunapuria and Lalit Tanwar are the children of  Kanwar Singh Tanwar(Congress leader) and Sukhbir Singh Jaunapuria(former MLA) got married in a lavish ceremony. As shagun, the villagers were given INR 11,00 each. Guests were gifted with safari suits and 30 grams of silver biscuits during the wedding ceremony.

It is also known that a total of 1100 designer turbans was made for relatives and other guests. Wedding celebrations continued throughout the duration and even after that in form of a reception party organized solely for VIPs at Ashok Hotel. The rumpus is that the groom’s side also received a silver dummy of a helicopter and the sum of 21 crores from the bride’s side. Lalit Tanwar and Yogita Jaunapuria’s Delhi wedding set new examples of what flamboyance looks like.

No.8. Sonam Vaswani and Navin Fabiani

Sonam Vaswani, the designer who founded the clothing label ‘Esse Vie London’ married Madrid-based businessman Harish Fabiani’s nephew Navin Fabiani. It is stated to be the most lavish wedding of the year. The welcome party for the guests was hosted at Vienna’s Palais Ferstel, the mehendi took place at the city’s Palais Liechtenstein Park. Sonam Vaswani was looking stunning in the outfit designed by Manish Malhotra. Belvedere Palace is where the wedding took place.

No.9. Vikram Chatwal and Priya Sachdev

The wedding of hotelier and actor Vikram Chatwal with model and investment banker Priya Sachdev was spread in three cities and was as long as 10 days. Private jets were arranged to get guests from various parts of the country. The guest list includes various national and international celebrities. About 3000 candles were lit and fifty thousand kilos of flowers were used to decorate the wedding venue.

No.10. Vineeta Agarwal and Muqit Teja

Billionaire Pramod Agarwal’s daughter Vinneta got married to Muqit Teja at the San Clemente Palace. It was a private affair with 800 guests. The decoration was beautifully done under the supervision of decorator Sumant Jayakrishna. Decoration included flowers that were specially imported from Paris.

Who has the most expensive wedding in India?

How much does a luxury wedding cost in India?

Ans: An average range of Indian wedding cost between 20 lakhs to 5 crores. This scale goes up with the status of the family.